American celebrity Ben Affleck was invited to be a guest on the PBS show “Finding Your Roots,”  but the slave-owning ancestory the genealogical researchers discovered in his lineage got scrubbed from the show at Affleck’s request, leaked emails have revealed. The show’s host, Harvard Professor of History Skip Gates, along with the show’s producers, acquiesced to Affleck’s request, saying they chose to focus on “the most interesting” aspects of the star’s background including “a Revolutionary War ancestor, a third great–grandfather who was an occult enthusiast, and his mother who marched for civil rights during the Freedom Summer of 1964.” It was these elements of Affleck’s life that were part of the fall 2014 episode when it aired. The show would have easily slipped from popular attention and memory except for the leaked emails charting Affleck’s attempt – and Gates’ complicity – in hiding these facts. In a statement released in the aftermath of the leak, Affleck said he regrets the move and said  “I was embarrassed” by the revelation of slave-owning ancestors. (A subsequent report quibbles with the claim of ‘ownership’ – but the overall facts of Affleck’s ancestors’ involvement in the slave trade remain unchanged.)

The reality that Affleck couldn’t face personally scales to a social level. In the U.S., there are hundreds of thousands – perhaps millions – of people alive today who are the direct descendants of slave-owners and millions of others who benefit from this architecture of inequality. In fact, as a growing field of historical scholarship demonstrates once more that slavery gave capitalism its start. All of our lives are shaped by the legacy of slavery in this country, as Heather McGhee recently pointed out.  The legacy of slavery also shows up in how we approach ancestry work, in how it is sold to us, and in how ancestry archives are created.

The Business of ‘Roots’

Make no mistake, once the domain of hobbyists genealogy is now big business. People spend upwards of a billion dollars each year at sites like MyHeritage.com, FindMyPast.com, and Ancestry.com.  Affleck, like many non-famous people, wanted and perhaps expected to find heroes among his ancestors. Marketing campaigns for genealogy firms help perpetuate this mythology of heroic white ancestors, whether for ancestry-themed television shows like PBS’ “Finding Your Roots,” or TLC’s “Who Do You Think You Are,” or for the online databases themselves. The television program “Who Do you Think You Are,” is actually produced by Ancestry.com, making it, in effect, one big commercial for the online database. (For scholarship on “Who Do You Think You Are,” see Kramer, 2011, and a more extensive, but still partial, review of the ancestry literature here.).

The marketing from the online genealogical juggernaut, Ancestry.com encourages people to “find the heroes in your family” by searching publicly-available analog records that have been digitized and locked behind the proprietary paywalls that Ancestry.com engineers have created. Scholar Graeme Davison wonders if this transformation in family history research may be subtly changing what was once a kind of secular pilgrimage into a series of financial transactions. But the pursuit of family history in these online databases are not the same for everyone. In the Australian context, the iconography of their advertisements suggest that would-be researchers “Discover your family heroes” in honor of ANZAC Day, an Australian and New Zealand commemoration of World War I.

Such an ad assumes the prospective researcher is a white person and aligns the “heroic” past with the settler-colonial history. At the same time, it excludes the indigenous and aboriginal Australians and New Zealanders from the pursuit of this digital genealogical quest.

There are similar ads for U.S.-based audiences, which feature exclusively or mostly white images of soldiers, alongside the caption, “Discover the heroes in your family.” As with the Australian context, this kind of image suggests a heroic past of settler colonialism that denies the indigenous experience of Native Americans.

‘Ancestors Worthy of a Status Update’

As Alondra Nelson and Jeong Won Hwang have pointed out in “Roots and Revelation” (2012), genealogical research was once predominantly the pursuit of older people, but social media status-sharing is driving renewed interest in searches that are then shared online. In their work, Nelson and Hwang focus on the “revelation” on YouTube, similar to the “reveal” in reality-based television program, when African American roots-searchers share their DNA results suggesting where their ancestors where from. Savvy marketers know this and are leveraging this connection in ads like this one: 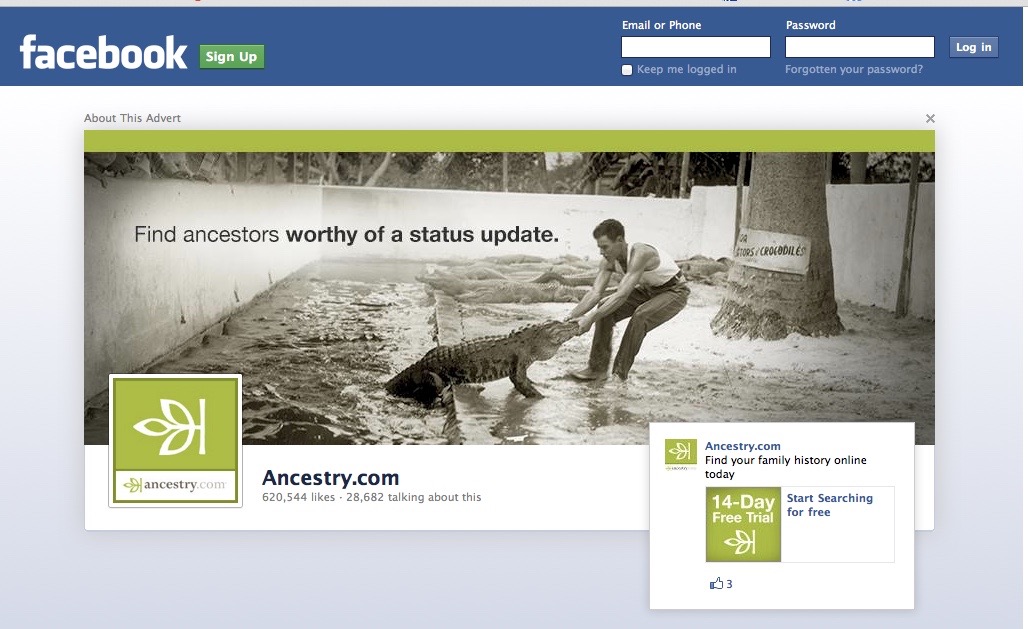 But, as researchers at Stanford have found — and probably anyone with a Facebook account can attest — there is a skew toward “happy news only” on Facebook, that has a negative impact on us. This kind of tilt toward happy-news-only is also built into the archives that online databases like Ancestry.com draw on for their service.

The business people behind online genealogical tools also want to market to researchers from diverse racial and ethnic backgrounds, but these researchers are confronted by gaps in the historical record. For many African Americans, genealogical research that relies on official documents is difficult, if not impossible, because there simply are no records. Their ancestor were not regarded as full citizens – nor fully human beings – worthy of record keeping. This painful past presents a marketing dilemma for online databases like Ancestry.com.  They are undaunted, however, refering to this gap in records euphemistically as  ‘The 1870 Wall’ – by which of course, they mean that prior to that time African Americans were enslaved to other Americans and there was often incomplete data. 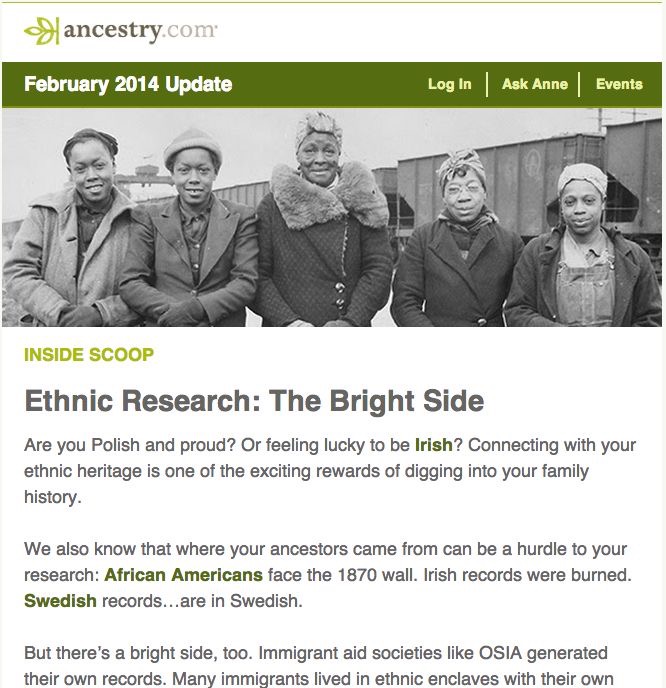 Given the history of very real history of material oppression and diaspora, finding documentation and crafting stories out of those documents can be a form of resistance by reclaiming some of what has been erased. Stories like the inspirational Delaney sisters memoir Having our Say (later a Broadway play), draw on oral history to re-tell the history of slavery and Jim Crow segregation through a retrospective lens of triumph over evil. But there is much that is missing from the digital archives at online genealogical databases.

The Wall Hiding White (heterosexual) Supremacy in the Archives

The archival practices that form the basis of the popular genealogical databases help perpetuate a one-sided retrospective reading of history, in which white people are configured as paragons of virtue.  Missing from most of these online databases are any systematic records of slave-owners, of Klan membership, organizers of lynch mobs, or bank executives that decided on red-lining and racial segregation. It is possible to create searchable online databases from existing records for these kinds of records. 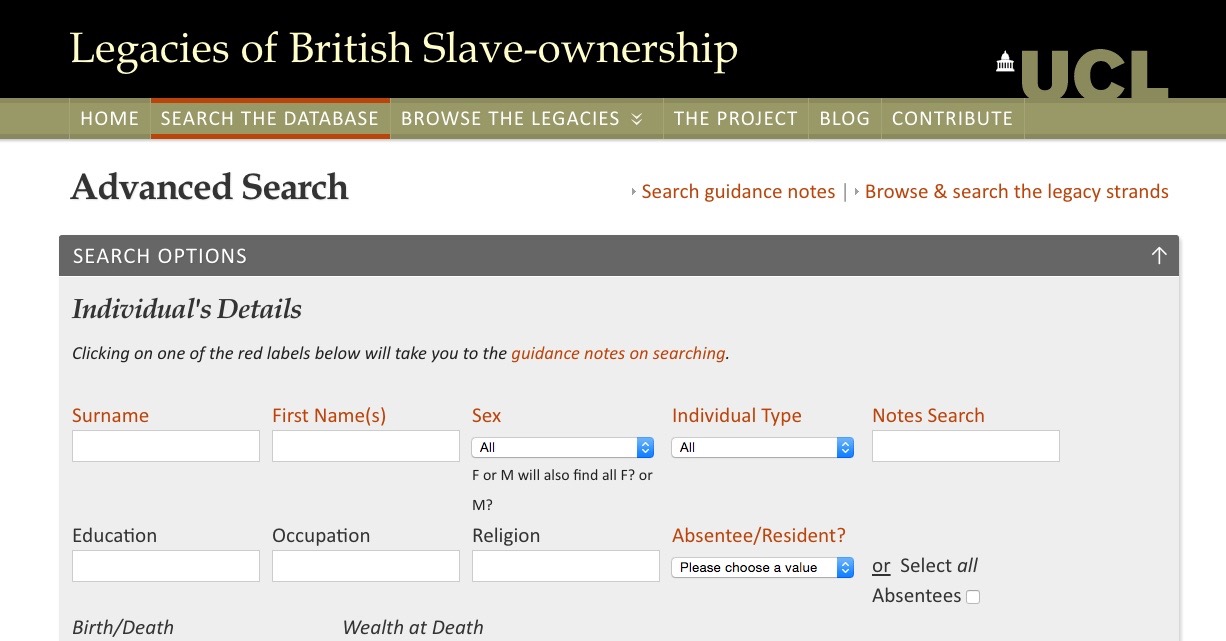 The University College of London has done precisely this with their Legacies of British Slave-ownership, but this database is not integrated into any of the main genealogical services, nor is there a U.S. counterpart to this. It could be different – Ancestry.com or other services like this – could develop these databases or acquire them, but it’s unlikely given the desire to “find the heroes” in the family. It’s many ways, it’s similar to narratives of the Holocaust, in which everyone imagines themselves to be the descendants of the heroic Schindler, of  “Schindler’s List,”  rather than descendants of an SS officer. (And of course, Spielberg’s version of this history is an altered and sanitized version that ignores Schindler’s collaboration with the Third Reich.)

The default genealogical researcher invited to create a ‘family tree’ at the LDS-created Ancestry.com is also heterosexual. Within the past few years, a growing series of complaints have noted that people who want to record marriages of family members who are the same sex cannot because the software won’t record the union. Which is to say, the family tree database won’t allow users to report a marriage unless it takes place between a man and a woman. In addition to offering a very heteronormative view of our current times, it makes it impossible to find queerness historically.

What this lopsided collection of material in the commercially available genealogical archives means is that the casual individual (white) researcher is unlikely to stumble upon any “bad news” about their ancestors. To find those connections to slave-owning ancestors – or Klan members, or organizers of lynching mobs or bank executives drawing red-lines on a map, that is, to find the legacies of how white ancestors contributed to building the architecture of white supremacy, you really have to dig deep. Or, in the case of celebrities like Ben Affleck, have someone else dig deep for you. Pity he wasn’t able to face up to what a team of genealogical researchers found for him.

With rising popularity of genealogical research, and the increasing availability of digitized databases, it is likely that even if they are hard to find for the individual researcher, we will have more revelations of prominent people with slave-owning pasts and their connections to descendants of people once enslaved by their families. Recently, reporters learned that the slave-owning ancestors of the actor Benedict Cumberbatch are also the ancestors of NYC Commissioner Stacey Cumberbatch. This brings discussions of slavery, rape, ownership, colonialism and racism front-and-center into contemporary politics and popular culture, and in general, we are ill-equipped to deal with these discussions. One news outlet ran a Cumberbatch-related story with the headline, “Should Benedict Cumberbatch say sorry for the slave-owners in his family?”

In 2007, the news carried a number of reports that genealogical researchers uncovered a connection between the families of Rev. Al Sharpton, African American civil rights leader, and Strom Thurmond, former U.S. Senator and ardent segregationist. While Sharpton was open to and intrigued by this revelation, Thurmond’s descendants’ response has been denial and, then ultimately, silence. In the wake of his discovery that his family had once been owned by Strom Thurmond’s family, Al Sharpton said: “I wrote my name and … had to come to terms with the fact that this was a name given to me by slaveholders.” The Thurmond family issued no similar statement reflecting on their slaveholding past. The different responses from Sharpton and Thurmond’s family reflect the asymmetry in excavating the racial past.

It’s incredibly rare to see a white person who looks this history in the face and tells the story. There are exceptions to this rule, of course. Ed Ball traces his family lineage to their slave-owning past, in his Slaves in the Famiily. Tom DeWolf and members of his family do it in the documentary Traces of the Trade, and Mab Segrest does it in her book, Memoir of a Race Traitor.

Even on Gates’“Finding Your Roots,”  CNN Anchor and New Year’s Eve bon vivant Anderson Cooper learned on the show that his family, the Vanderbilts, were slave owners. Unlike Affleck, Cooper allowed producers to leave this fact in the show, which they highlighted as a “discovery of a dark past”. Cooper, for his part, said that he was “ashamed” to learn this.

Given the history of racial oppression and white domination, doing ancestry work is an asymmetrical process that has a differential effect in the present depending upon one’s standpoint. For those who were victims of oppressive systems, revisiting history as Weems does in her work, reclaims those lives and resituates them in a different context. While for those who have been architects and benefactors of oppressive systems, such as Affleck, revisiting a history of unearned privilege based on racial inequality may result in shame at what their ancestors perpetrated as white slaveowners.