The events in Baltimore today are part of a long tradition of urban uprisings in the U.S.

Some social scientists, like the late Harlan Hahn and I, have been researching black urban uprisings in great detail since the 1960s. Yet, when urban uprisings occur every few years, this major research and the deep historical background it assesses are regularly ignored or forgotten—not surprisingly, of course, given that the mainstream media and most political institutions are controlled by elite white men with no interest in remedying the underlying conditions that create so-called “urban riots.”

In the first sustained analysis of the black urban rebellions ever done by social scientists, Harlan Hahn and I (Ghetto Revolts, Macmillan, 1973, nominated for a Pulitzer) dissected and refuted the prevailing conservative theories of these black rebellions— always blaming the victim theories— and laid out an alternative power-and-oppression interpretive framework. We showed how these were not “wild riots,” but were urban uprisings. Given that, they were, and are, better conceptualized as part of centuries-old racial power struggles. In our book we examine, for the years between the early 1960s and early 1970s, the hundreds of black urban revolts that occurred throughout the United States. These included massive uprisings in the Watts district of Los Angeles in 1965, in Detroit and Newark in 1967, and in Washington, D.C., in 1968. 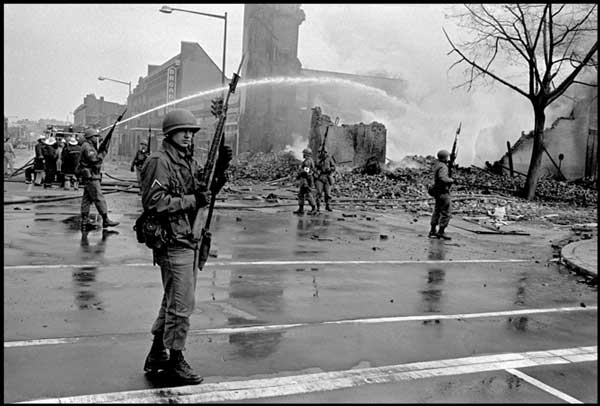 The impact of these large-scale revolts was felt across the nation, which was confronted by a militant new generation of proud African Americans willing to engage in this ultimate type of anti-racism protest, much like we seem to be witnessing again. Critical studies of the 1960s-1970s black revolts regularly emphasized the concepts of “precipitating events” and “underlying conditions.”

Police malpractice – usually police brutality – like the many cases in Baltimore – of various kinds often has been the precipitating event for black rebellions, now for seven decades. White police officers have historically played, and still play, a major role in the violent repression of black Americans, especially those who seek to protest racism. Historical data on police violence are chilling. In the years 1920-1932 alone substantially more than half of all African Americans killed by whites were actually killed by police officers. Police were also implicated in the 6,000 lynchings of black men and women from the 1870s to the 1960s.

Not surprisingly, in recent decades police harassment and violence have been openly resisted by black Americans in the form of large-scale community rebellions. Our analysis of black community rebellions for the years 1943-1972 indicated that the immediate precipitating event of a great many uprisings was the killing or harassment of black men by white officers.

This reaction to police harassment can also be seen in more recent rioting by black citizens, such as in Los Angeles and Miami in the 1980s and 1990s, and in Ferguson, New York, Baltimore, and many other cities since. In spite of some desegregation and other improvements in policing since the 1960s, police violence and malpractice have continued to oppress black communities.

The role of white officials and the police in generating and accelerating rioting, while often rationalized or overlooked by a majority of white Americans, has been significant. Police brutality and other malpractice targeting African Americans remain a major problem across the United States. In one nationwide poll, nearly 80 percent of the black respondents said that in most cities the police did not treat black residents as fairly as white residents.

Yet urban black rebellions have always been about much more than these precipitating events, including police malpractice. As we showed four decades ago in Ghetto Revolts, a full understanding of urban uprisings requires much attention to the underlying foundation of three-plus centuries of white-on-black oppression. This oppression set in place, and keeps in place, numerous highly exploitative, inegalitarian, and undemocratic national and local-urban political-economic institutions. The “underlying conditions” of urban uprisings mostly involve the structural realities of economic oppression that create much unemployment and underemployment and have a severe impact on black individuals and communities. It is not surprising that economic institutions are often targets of those who protest by violent means.

History suggests too that the current uprisings in Baltimore can get much worse. For example, in major uprisings in Miami in spring 1980, black residents lashed out against the police and the larger white society with extensive burning and looting of stores. That uprising resulted in 16 deaths, 400 injuries, and $100 million in property damage. A poll asked black Americans nationally whether that rioting was justified. Twenty-seven percent said “Yes,” and another 25 percent replied “Don’t know” or “Not sure.” More black uprisings occurred in Miami between 1982 and 1991, triggered by incidents involving police officers. Recall too that in Los Angeles in spring 1992, the acquittal on charges of police brutality of four officers who had been videotaped brutally beating an unarmed black man (Rodney King) triggered the most serious urban rebellion in the 20th century. After days of rioting, more than 10,000 blacks and Latinos had been arrested, and more than 50 people had been killed. Property damage exceeded one billion dollars. At one point, 20,000 police officers and soldiers patrolled large areas of Los Angeles. The events there triggered uprisings in other cities. As in the 1960s urban rebellions, the underlying conditions included poverty, unemployment, and poor housing conditions. 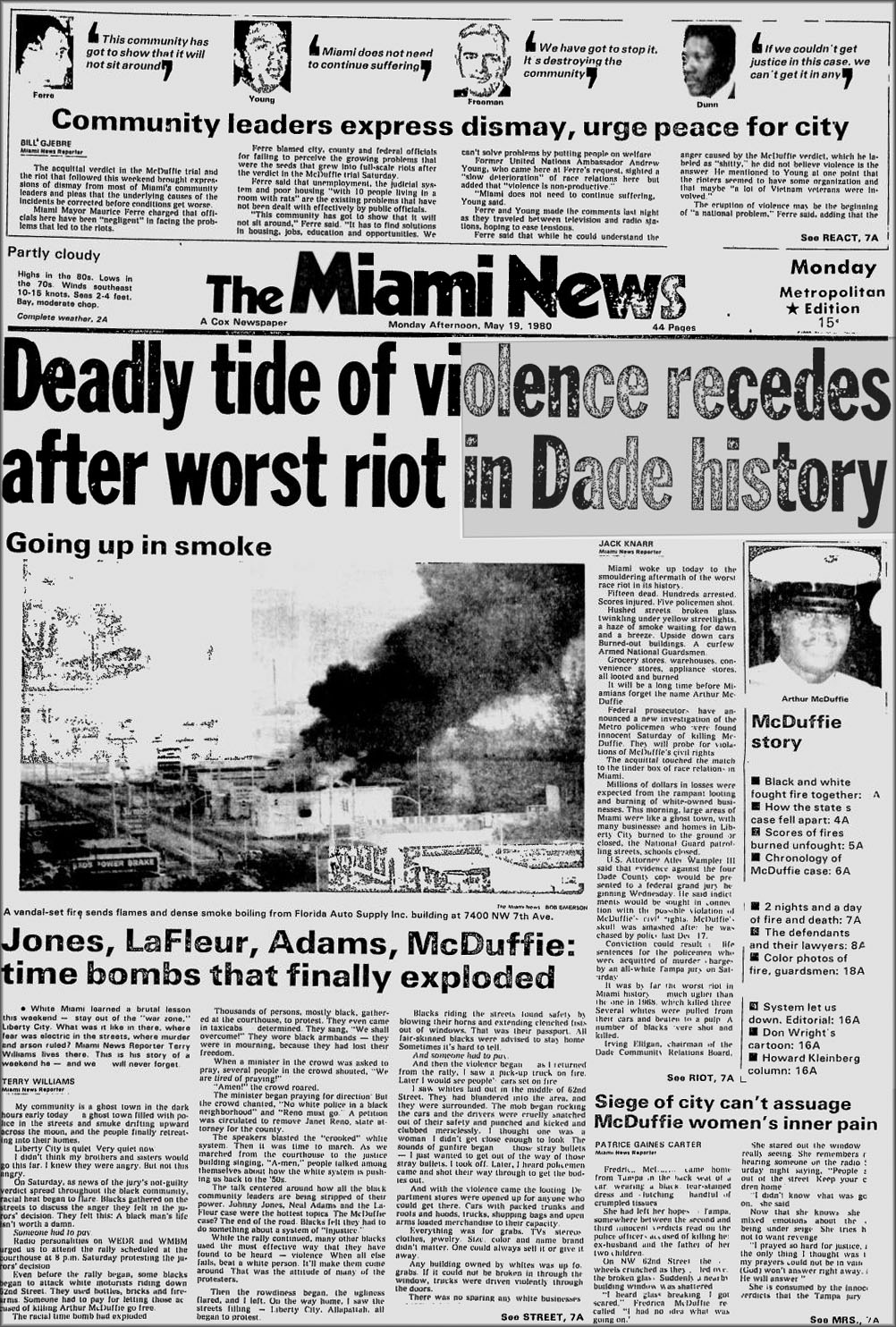 The exploitative, discriminatory, and unjust-enrichment-hoarding actions by whites who run our inegalitarian political-economic institutions, generally elite white men and their acolytes, have actually generated black rebellions from the 1930s, through the radical 1960s, to the present day. They have intentionally generated unjust enrichment for a majority of whites, and unjust impoverishment for a majority of black Americans, past and present. This country, from colonial years, has been firmly grounded in highly oppressive political-economic institutions –under slavery (about 240 years of that) and then under legal and official segregation (another 90 years of that). Not even official freedom for this country, and for black Americans, came until the 1969 Civil Rights Act when into effect, barely two generations ago.

If one gives serious attention to understanding that foundation of white-generated, white-maintained oppression and its ever-present institutions (for example, we still live under a Constitution made by slaveholders), one can see more clearly how and why some of the earliest historical “riots” (for example, Chicago in 1919) were actually white “riots of control” involving rank-and-file whites and elite whites enforcing centuries-old racial oppression. Only later do we see large-scale black rebellions (the 1960s rebellions and those since) against that system of racial oppression. To make sense of all this, one needs to accent much more the critical white actors, especially elite white actors, in the institutional contexts that generate the unjust impoverishment and unjust police malpractice that generates urban black uprisings.

Where does this leave us today? Certainly, in a highly and systemically racist society. In a summer 1857 speech in New York, the great abolitionist and intellectual Frederick Douglass, long ago noted the reality of this racial oppression and what it often takes to truly combat it:

The whole history of the progress of human liberty shows that all concessions yet made to her august claims have been born of earnest struggle. . . . If there is no struggle there is no progress. Those who profess to favor freedom and yet deprecate agitation are men who want crops without plowing up the ground; they want rain without thunder and lightning. . .. Find out just what any people will quietly submit to and you have found out the exact measure of injustice and wrong which will be imposed upon them, and these will continue till they are resisted with either words or blows, or with both. . . . If we ever get free from the oppressions and wrongs heaped upon us, we must pay for their removal. We must do this by labor, by suffering, by sacrifice, and if needs be, by our lives and the lives of others.