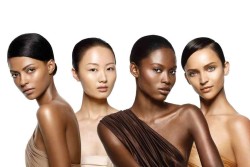 I decided to run a little ‘Net-search experiment on women of color (WOC) the other day. I think we can all admit doing this kind of (re)searching to look at social issue climate is something almost everyone does. In some ways the Internet offers a lot of insight into the public imaginary and what’s going on people’s minds. But we do have to dig. A lot. And even then it’s near impossible to rummage through the multitudes of crap to get to just a fraction of what’s substantial online. That’s where search engines – which employ pretty powerful algorithms for searching the vast endless sea that is web content – become well, kind of irresistible. What happens when I Google this? What happens if I Google that? We really do live in the age of the Googlization of everything, as Siva Vaidhyanathan suggests. So, I wondered, has information about women of color been Googlized, too?

So this particular morning I was thinking about racialized gender bias; how women of color experience sexism if different racist ways. My memories rushed online as I thought back to all the articles and posts I’d read on WOC over the last months. Of course there’d been narrative patterns in what I’d read, but the webbed interconnectivity of those patterns, the outline, wasn’t always something I paid attention to in a big-picture way. And so then of course I couldn’t help it, I thought, “I wonder what happens if I Google labels like ‘Black women,’ ‘Native women,’ ‘Latina women,’ ‘Asian women’ and look at the results aside each other? What will I see?”

First some disclaimers. One, I fully recognize Google’s algorithms tailor to user history so what I got wouldn’t be the same as what you’d get. Two, I acknowledge Net searches are snapshots in time and results change by the probable millisecond so my results should not be understood as static by any means. Three, Google searching is not “formal” social science research so this post should not be taken as hard evidence but transformative discussion. And four, the goal here is not to create a suffer-meter for gauging “who has it worst.” Rather the point is that all women of color are painfully oppressed but their oppressions are constructed by oppressors in different ways.

Disclaimers now disclaimed. Here were the first-page results of my searches:

Unsurprisingly women of color were often understood, shaped (and objectified) through their appearance. For example, a search for “Black women” turned up these top three results: “The 30 Most Beautiful Black Women in History,” “Why Are Black Women Considered Unattractive?” and, “Beautiful Black Women.” Of all four WOC searches I conducted combined, 51 percent of results referred to physical appearance, beauty and sexuality. Before we continue though let’s make something abundantly clear. This so-called beauty and desirability is a mainstream construct made by predominantly a white, heterosexual, cis-gendered male gaze. Which perhaps explains what I discovered next.

Amongst these racialized beauty narratives there were flagrant patterns impossible to ignore. Results of a search for “Black women” produced only 30 percent referring to Black women’s physical appearance, beauty and sexuality; there were no ads for sex/dating/marriage. The results of a search for “Native women” produced only 9 percent referring to Native women’s physical appearance, beauty and sexuality and again, no ads for sex/dating/marriage. Regardless of the fact WOC are likely glad not to see sex/dating/marriage ads, the complete absence of said ads combined with the low number of references to attractiveness was glaring to me and seemed to indicate something about how dominant male gaze racializes away the desirability of Black and Native women in an erasing, subtracting, and negating manner.

I was forced to contemplate a colonial mindset that seemed to emerge. Black and Native American women are generally understood (rightfully so) as having been in America a long, long time. Did it follow then that dominant male perception of their beauty in a region already “conquered” seemed to trend toward disinterested, callous or uncaring? Consider that by contrast when I shifted my search to women typically stereotyped as immigrants and foreigners, male perception morphed into one that reveled in the mysterious and hungrily desired to own and devour it. The results of a search for “Latina women” produced 42 percent referring to physical appearance, beauty and sexuality and 25 percent ads for sex/dating/marriage. Elevated exoticization was blatantly revealed in titles like “Engage the Exotic – Spanish Women” and “Meet Latin Women for Marriage, and Exotic Latin Bride.”

The query for “Asian women” produced a particularly severe level of fetishization. This search turned up roughly twice as many results (23 for Asian women compared with 13 for Blacks, 11 for Natives and 12 for Latinas) but the extra results were accounted for by the fact that almost half of entries for Asian women were advertisements for sex, dating, and marriage. A whopping 87 percent of results referred to Asian women’s physical appearance, beauty, and sexuality and 48 percent were ads for sex/dating/marriage. The search for “Asian women” was the only one to list sex ads in the main result column first. Additionally their acute hyper-sexualization was the only one framed in especial relationship to white men: “Asian Women Want YOU NOW,” “42 Seriously Hot Asian Women To Get You Through Monday,” “Rules of Attraction: Why White Men Marry Asian Women…” and “Asian Women And White Men.” 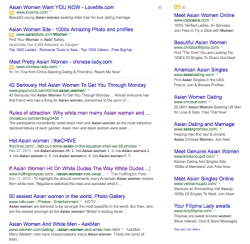 Yet whether women face superficial racialized “undesirability” or fetishized “desirability” we must understand BOTH stereotypes are dominantly male-framed and as such BOTH are incredibly diminishing and oppressive to women of color. It is damaging and painful to have your natural beauty dismissed or cringed at. It is also damaging and scary to have your natural beauty treated like a strange fruit in need of rapid consumption. But either way – and this is the sexist piece for sure – too much time gets spent scrutinizing women’s appearance and then women by necessity are forced to do the same. I mean already the majority of this piece has been spent breaking down racialized beauty narratives. Case in point, when I ran my Google searches the number of results challenging stereotypes and identifying racial barriers while higher for Native women (63 percent), hovered at around half for Black and Native women and less than a third for Asian women. There was also a depressing dearth of results referring to women of color as leaders for progress and change: 38 percent for Black women, 36 percent for Native women, a small 17 percent for Latina women, and a miniscule 9 percent for Asian women.

Bringing us to the crux of the issue. What this little experiment confirmed to me was something I already knew; a Google search may be limited in its capacity/reliability as a research tool but there are some over-arching truths that exist everywhere. It’s undeniable that women of color in a sexist/racist society face very real, welded gender/racial barriers to thriving and succeeding holistically in their lives. It’s also undeniable that women of color often get reduced to their “looks” and when this happens, the pervasiveness of the gender/race-biased obstacles they actually face everyday — get reduced too.