Today the U.S. Department of Justice (DOJ) released their report the Investigation of the Ferguson Police Department, following the shooting death of Michael Brown at the hands of a Ferguson police officer.

The 102-page report documents the systemic racism that the police department of Ferguson, Missouri engaged, and it reads a bit like a piece of sociological research. The methodology included the following:

we interviewed City officials, including City Manager John Shaw, Mayor James Knowles, Chief of Police Thomas Jackson, Municipal Judge Ronald Brockmeyer, the Municipal Court Clerk, Ferguson’s Finance Director, half of FPD’s sworn officers, and others. We spent, collectively, approximately 100 person-days onsite in Ferguson. We participated in ride-alongs with on-duty officers, reviewed over 35,000 pages of police records as well as thousands of emails and other electronic materials provided by the police department. Enlisting the assistance of statistical experts, we analyzed FPD’s data on stops, searches, citations, and arrests, as well as data collected by the municipal court. We observed four separate sessions of Ferguson Municipal Court, interviewing dozens of people charged with local offenses, and we reviewed third-party studies regarding municipal court practices in Ferguson and St. Louis County more broadly. As in all of our investigations, we sought to engage the local community, conducting hundreds of in-person and telephone interviews of individuals who reside in Ferguson or who have had interactions with the police department. We contacted ten neighborhood associations and met with each group that responded to us, as well as several other community groups and advocacy organizations.”

What they found was certainly not surprising for regular readers here, but it was no less shocking for its grim familiarity. The stories of the routine, systematic, racist practices of the Ferguson Police Department (FPD) reveal that the African American citizens of that municipality live under a repressive, brutal regime that circumscribes the boundaries of their lives in ways that appear totalizing and inescapable. Through a pattern of police stops that the report deems “improper” and likely unconstitutional for things like jay-walking, coupled with a revenue-generating scheme when the inevitable violations occur, followed by an elaborate system of fines, penalties and warrants for failure to appear in court over those violations, the predominantly white FPD maintains an effective system of apartheid against the predominantly black residents of the town of Ferguson. This is a moral outrage, and it is also life-threatening in its consequences for African American residents.  Here is one account:

While the record demonstrates a pattern of stops that are improper from the beginning, it also exposes encounters that start as constitutionally defensible but quickly cross the line. For example, in the summer of 2012, an officer detained a 32-year-old African-American man who 19 was sitting in his car cooling off after playing basketball. The officer arguably had grounds to stop and question the man, since his windows appeared more deeply tinted than permitted under Ferguson’s code. Without cause, the officer went on to accuse the man of being a pedophile, prohibit the man from using his cell phone, order the man out of his car for a pat-down despite having no reason to believe he was armed, and ask to search his car. When the man refused, citing his constitutional rights, the officer reportedly pointed a gun at his head, and arrested him. The officer charged the man with eight different counts, including making a false declaration for initially providing the short form of his first name (e.g., “Mike” instead of “Michael”) and an address that, although legitimate, differed from the one on his license. The officer also charged the man both with having an expired operator’s license, and with having no operator’s license in possession. The man told us he lost his job as a contractor with the federal government as a result of the charges.

This account is not an isolated incident, but rather suggests the broader pattern of racial disparity in Ferguson.

The DOJ report also reveals a small cache of emails that circulated in the Ferguson Police Department in the days and weeks following the death of Michael Brown. Here is a recap of these provided by the Southern Poverty Law Center: 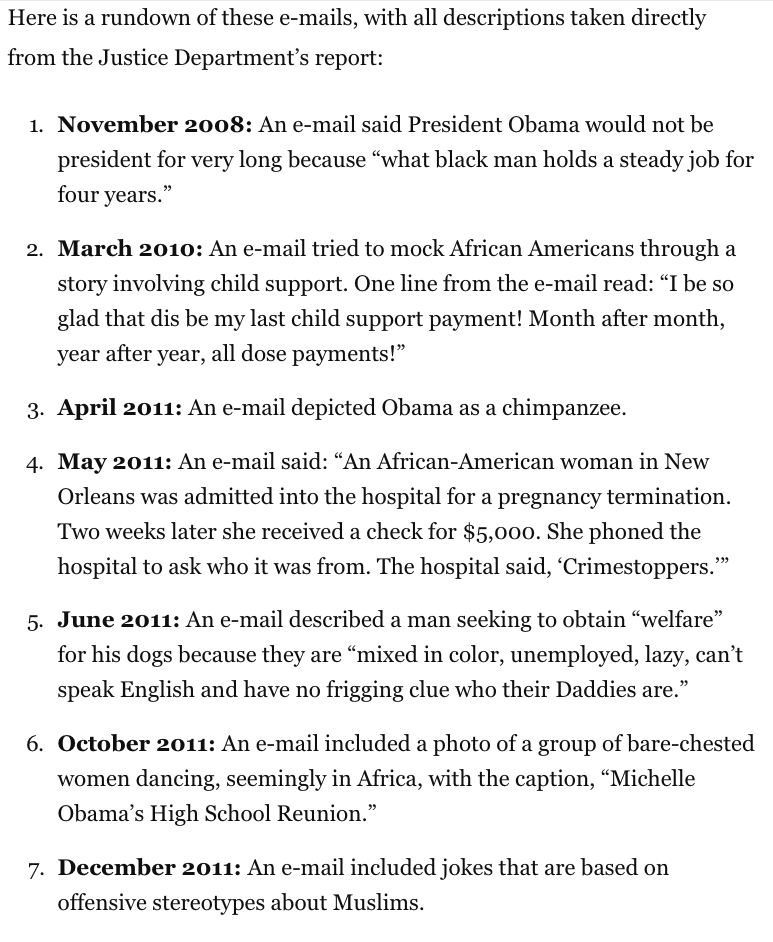 That this new technology – email – is joined with the old technologies of trained attack dogs, bullets, and policing practices routed in racist brutality – highlights the mix of old and new mechanisms of racism that circulate today. In taking stock of the racist emails, the DOJ report has this to say:

“The racial animus and stereotypes expressed by these supervisors suggest that they are unlikely to hold an officer accountable for discriminatory conduct or to take any steps to discourage the development or perpetuation of racial stereotypes among officers.”

The cold, bureaucratic language of ‘racial animus’ seems too tepid for a police force that murders an 18-year-old, leaves his body in the street for hours, and then sends racist ‘joke’ emails around afterward. This, it is safe to say, is looking into the abyss of depravity that is white supremacy.

This is a textbook illustration of what the term “disproportionate” means. If the stops and arrests of African Americans were proportional to their percentage of the population, those charts at the bottom there would both read “67%” – but since they’re higher, that’s disproportionate. In other words, something else is going on here. Something systematic having to do with race. Here’s another set of charts from the DOJ: 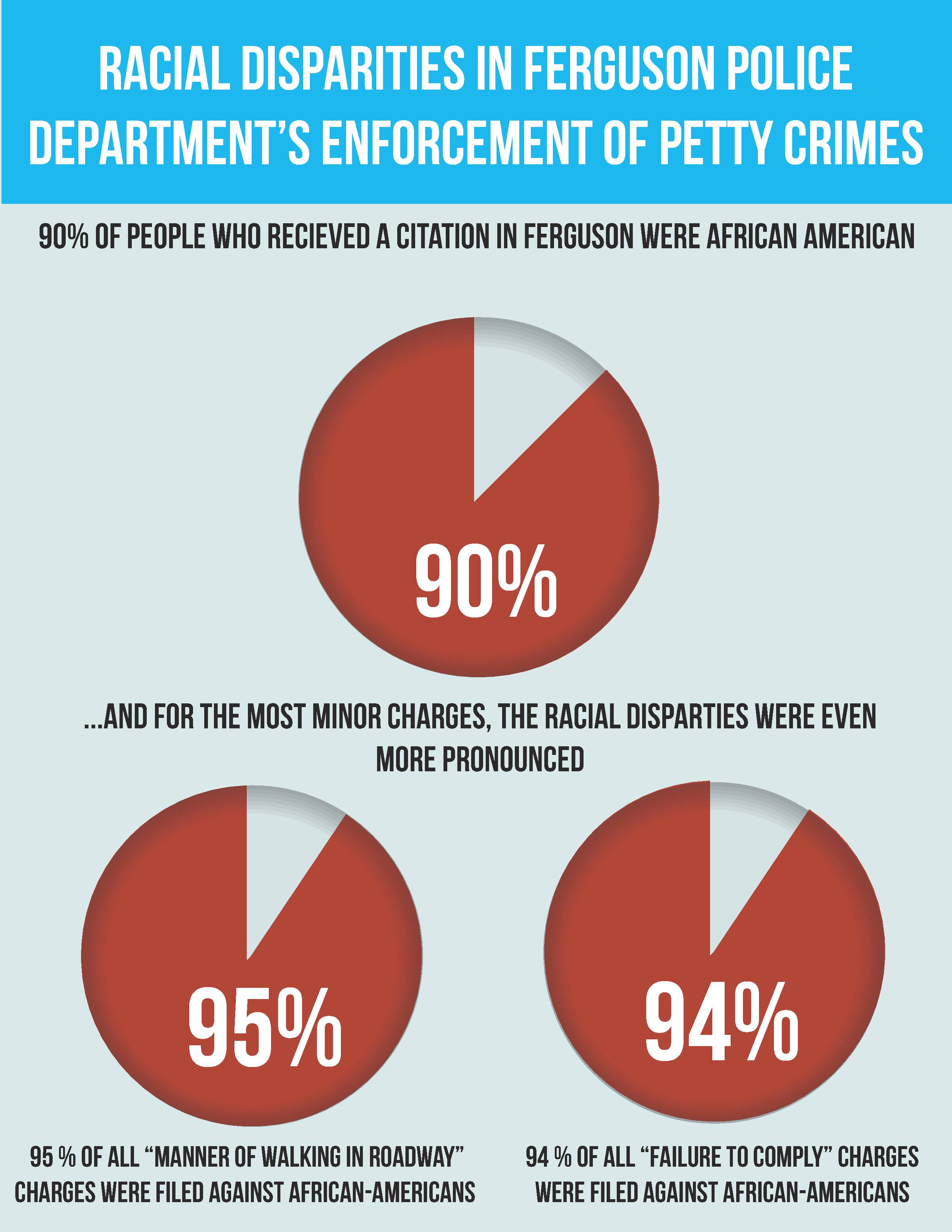 This kind of stark racial disparity is characteristic of what we, in the U.S., are taught to believe happened in the distant Jim Crow past, or in apartheid South Africa, but we have trouble believing this is happening now, in our own time.

To be sure, this is not an isolated police department, this is not unique, or an unusual set of racial disparities.