As we approach February 14, the opportunities for learning about white feminism abound. The recent dust up with Rosie O’Donnell on Twitter began with questions for Eve Ensler – who was scheduled to appear on The View – and O’Donnell’s subsequent defensive response to those questions. But, to really appreciate the context of what happened, you have to understand the background on V-Day, indigenous women’s activism, and the substantial critique of Eve Ensler’s work.

For more than 20 years, Indigenous Women in Canada have led Women’s Memorial Marches to signify the strength of decolonization and the power of Indigenous Women’s leadership. Known as the “Memorial March for Missing and Murdered Indigenous Women” (#MMIW), the commemoration has its origins in tragic events of January 1991 a woman was murdered on Powell Street in Vancouver, Coast Salish Territories. Her murder in particular acted as a catalyst and  February 14 became a day of remembrance and mourning.

The “Shamanistic exercise,” refers to the fact that Ensler was diagnosed with cancer and traveled to Congo, in central Africa, to seek alternative healing. She wrote a book about her experiences called, In the Body of the World.  In it, she refers to her cancer as similar to the injuries of women who had been raped, referring to it as “Congo Stigmata,” which of course, became a popular hashtag. For everything wrong with this bit of cultural appropriation, see this Storify by Mikki Kendall, or this piece by Jude Wanga, or this recap by Kelly Bennett.

Back to the  Open Letter to Ensler,  from Lauren Chief Elk (@ChiefElk):

Lauren Chief Elk speaks the truth and Ensler’s work is a clear illustration of the trouble with white feminism. 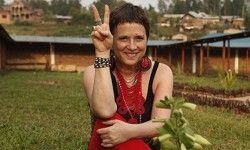 Ensler, her organizations, and the appropriation of V-Day are part of what many have begun to name as “carceral feminism,“ much of it around claims about “trafficking.” In a recent peer-reviewed article in Signs, scholar Elizabeth Bernstein writes:

“…feminist and evangelical Christian activists have directed increasing attention toward the “traffic in women” as a dangerous manifestation of global gender inequalities. Despite renowned disagreements around the politics of sex and gender, these groups have come together to advocate for harsher penalties against traffickers, prostitutes’ customers, and nations deemed to be taking insufficient steps to stem the flow of trafficked women. In this essay, I argue that what has served to unite this coalition of ‘strange bedfellows’ is not simply an underlying commitment to conservative ideals of sexuality, as previous commentators have  offered, but an equally significant commitment to carceral paradigms of justice and to militarized humanitarianism as the preeminent mode of engagement by the state.”

To put it more plainly, what the focus on incarceration as a solution to gender inequalities does is both insufficient to address the problems that women (of all races) are confronted with and shifts them on to another system of oppression that literally consumes the bodies of black and brown men. The blogger Prison Culture puts this succinctly here:

Indeed, it does fall way, way short. I’ll be back with more about Rosie’s defense of Ensler in a subsequent post in this series.

~ This post is part of a series, The Trouble with White Feminism. If you’re new here, this is the fifteenth post in an on-going series I began in 2014. To read the previous entries, begin with the initial post and navigate through using the “Read next post in series” link. I’ll eventually compile all these into an e-Book, for ease of reading. If you have suggestions for what to include in the series, use the contact form on this blog, or hit me up on the Twitter machine: @JessieNYC.