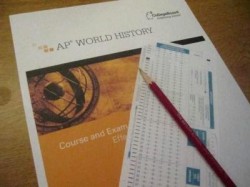 Just weeks ago in Salt Lake City the national grading/reading of the Advanced Placement World History Exam became something of a playground for deeply rooted anti-Asian racism thinly veiled as “light-hearted” humor. Did you hear about this? Bet you didn’t. Because barely anybody did. A brave handful of graders who were there protested, but MANY more (graders and non-graders) pushed back with abusive online bullying and what’s-the-big-deal-this-isn’t-even-racist rhetoric. So far only Angry Asian Man and Hyphen Magazine picked up the story. No major networks found it interesting. ETS and the College Board eventually issued a half apology. And then, silence. Crickets chirp. The nation waves away yet another heinous incident of Asian oppression as irritating ambient noise while presumably the glowing promise of a “model minority symphony” continues to ring loud, clear, and deafeningly across the land.

Advanced Placement (AP) is a program in the U.S. and Canada, created by the College Board (which also owns and publishes the SAT), offering college-level curricula and exams to high school students. The rigorous curricula for a wide variety of AP subjects is designed by a College Board panel of experts and college-level educators in each field of study. Standardized tests on this material are offered every May. In 2013, over 2 million students took almost 4 million of these exams (pdf). Those who perform well can receive course credit and/or advanced standing at thousands of universities worldwide. Exams are also written by The College Board but the proctoring, administering, and grading is farmed out externally to Educational Testing Service (ETS). AP tests contain a multiple-choice section scored by computer and a free-response section evaluated by an ETS employed team of some college professors and grad students but mostly high school AP teachers. In June this lineup of educated folk gather for a week to score student essays at what are known as AP Readings. AP Exam Readers are led by a Chief Reader, a college professor who has the responsibility of ensuring that students receive scores that accurately reflect college-level achievement.

The 2014 document-based AP World History question (pdf) using 9 related/given documents, was to “…analyze the relationship between Chinese peasants and the Chinese Communist Party between circa 1925 and circa 1950.” According to Phil Yu of Angry Asian Man  who heard from several attendees at this year’s AP World History Reading, this essay question “…apparently became an excuse for organizers to run wild with a week filled with all sorts of culturally insensitive jokes and anti-Asian imagery.” Yu further describes the Chief Reader allegedly, “made jokes about the Tianamen Square Massacre “Tank Man”  (“You don’t want to be that guy.”) while wearing a Red Guard cap of the Cultural Revolution” and was “reportedly one of many people wearing such a cap that week.” And of course every Asian/Am-identifying person is flinching right now because we know all too well what it means to be the punchline. 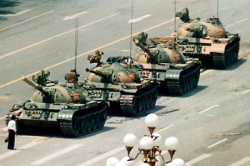 This is “Tank Man”; one of the iconic images from the Tianamen Square Protests of 1989 which just saw their 25th anniversary  mid-April through early-June (literally days before the AP World History Reading). Okay moving on. Unfortunately it doesn’t get better. The AP World History Reading also annually offers for purchase a commemorative T-shirt loosely based on the same document-based essay question. According to Hannah Kim over at Hyphen Magazine  a preview of the back of this year’s T-shirt was shown the first day. It featured appropriated Chinese communist imagery captioned with a “chop suey” font. Some attendees were offended and complained immediately. But despite assurances from ETS that the design would be reworked, the shirts were distributed end of the week unchanged. And lo and behold, on the front was yet another fun surprise; yellowface cartoon caricatures of the Chinese Communist “Party”: 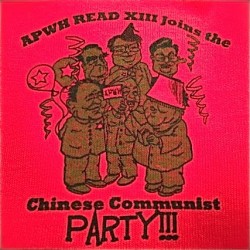 Kim relays sadly many AP World History teachers and academics present “were not put off by this racist imagery,” that “hundreds of educators purchased this shirt and wore it on the last day” [emphasis mine], and confirms Yu’s report that this was “just one of many instances of cultural insensitivity directed at Asian Americans during the week-long grading.”

Pushback, Paralysis, & I Don’t Get It

What was originally a smaller protest became a little larger and louder. But substantial pushback rose to the occasion with stop-being-so-sensitive-can’t-you-take-a-joke (and of course now every Asian/Am-identifying person is shaking their head sadly because we know all too well the experience of being told to calm down). The pushback morphed into widespread sometimes aggressive invalidation by others who really didn’t see what the problem was accompanied by total paralysis on the part of ETS HR (and by association the College Board).

Let’s be very clear here because really, it’s not that difficult. As sociologist Joe Feagin, Ph.D., writes in his 2010 book The White Racial Frame:

“Whites view Asians and Asian Americans as available targets for racial stereotyping, imagining, and hostility. Over the last century and more, Chinese, Japanese and other Asian Americans have been imaged and labeled in many areas of society as ‘the pollutant, the coolie, the deviant, the yellow peril, the model minority, and the gook…” [emphasis added] (Feagin 2010, p.113).

When the Chief Reader used serious political references to Chinese people/events in a mocking way while simultaneously alluding to oppressive tropes that have been used to discriminate against Asians in America for decades/centuries (i.e. model vs deviant behaviors + marks of foreignness “you don’t want to be that guy”), whether intentional or not he racialized his joking. He leveraged his position of power to microaggressively marginalize nonwhite peoples. Racialized joking is extremely problematic because it is a particular way people of color in this nation continue to experience discrimination and be demeaned, and therefore a key perpetrator in keeping racism alive today.

Similar scenario for the T-shirt’s Asian cartoon parody, which many also are still struggling to understand as anything other than innocuous, silly, or even benign. Again, it’s not that difficult. “Stereotypes, omissions, and distortions,” writes Beverly Daniel Tatum, Ph.D., in her well-known book Why Are All the Black Kids Sitting Together in the Cafeteria? , “All contribute to the development of prejudice” (Tatum 1997, p.5). 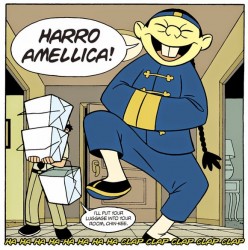 Like all race stories, America has a long, long history of anti-Asian propaganda that has promulgated itself through the use of degrading caricatures. If you don’t believe me, Google anti-Asian propaganda.  Perhaps no one has said it better than Asian American graphic novelist Gene Luen Yang in describing his choice to strategically employ offensive Asian stereotyping for character Chin-Kee in American Born Chinese:

Cousin Chin-Kee isn’t meant to be funny. He’s meant to come off the page and slap you in the face. If you’re laughing at him, I want you to do so with a knot in your stomach and a dry throat…You see, Cousin Chin-Kee is no more my creation than the Monkey King. I yanked him, every last detail about him, straight out of American pop culture…Cousin Chin-Kee just keeps coming back to visit. In the 80’s, he showed up as Long Duk Dong in Sixteen Candles. More recently, he reared his ugly head in movie critic Rex Reed’s review of the Korean film Old Boy. When the American public caught a glimps of him in William Hung’s American Idol performance, Hung was promptly made the most recognizable Asian-American male in the world. Every time Asian America thinks it’s finally time to breathe easy, the doorbell rings and we find Cousin Chin-Kee on the doorstep with a piece of take-out box luggage in each hand. America simply isn’t sensitive to modern slurs against Asian Americans.” —Gene Luen Yang

What’s really going on here is something that has been going on for generations and which perseveres in adaptively replicating itself across time. ETS and the College Board have since published a statement and apology condemning the incidents. In it they come clean about what happened using powerful words to describe the events: “unacceptable,” “inappropriate,” “offensive” and “toxic.” I applaud this move. BUT if you read the statement a few more times, in, under, and over the lines, you might notice another thread: “Neither ETS nor the College Board has any involvement,” “College Board officials were notified of these incidents after the AP World History Reading was over,” “the College Board has asked ETS to discipline any responsible individuals” [emphasis mine], and then over on Twitter, “We didn’t sponsor, create, or distribute the offensive materials, which we find truly appalling.” This duck-and-cover-not-our-fault subtext deflects blame onto a pathologized individual (or few individuals) and completely avoids institutional accountability. “Equating racism with pathology,” writes Derald Wing Sue, Ph.D., in his also well-known work Microaggressions in Everyday Life,  “Diminishes its widespread nature by fostering an illusion that good, normal, moral, and decent human beings do not harbor racist attitudes and beliefs” (Sue 2010, p.146).

This is what we mean when we talk about systemic racism. A historically-rooted pervasive set of beliefs, actions, and inactions by individuals and institutions that all together continue to keep the racial order in place. There were many people involved here either intentionally or unintentionally, through force of will or willful ignorance, denial and complicity. ETS and the College Board completely disassociate themselves from supposed guilty individual(s) but offer no discussion around how they were the ones who hired said person(s) into positions of power to begin with. What is their hiring and training process? Do they fold in anti-bias practices? How did the T-shirt (which ETS and the College Board claim “one person” made though that seems highly unlikely) ever make it out the gates? “There was ample opportunity to prevent this from happening,” wrote a Twitter user, “It should have never been sold in the first place.” Once out the gates, why did hundreds of high school teachers and college professors buy the T-shirt and wear it? Then when word of this entire debacle did finally get round — something affecting not only our nation’s educational system, but children and families, our FUTURE — why do so few seem to care? And how do we just know the fact that it was Asians who were targeted in an academic setting is significant when we consider the anemic aftermath and overall lack of visibility?

These are tough and deeply uncomfortable questions. They hurt. They suck. They make me tired, overwhelmed and completely exhausted. Given these feelings and the particular climate around this incident I suspect far more people are putting in earplugs, slipping on blinders and singing “LA LA LA” really loudly than anything else right now. Nevertheless. I know some of us are still engaged. I hope more of us can become so. If we keep asking, keep challenging, keep demanding accountability and creatively seeking solutions, I really do believe we can do better by ourselves and our children.