As Sally Kohn cogently points out, women weren’t even included in the original legislation that attempt to level the playing field in education and employment that we now refer to as “affirmation action”.   (The same policies are known as “employment equity” in Canada and “positive action” in the UK.) The first affirmative action measure in America was an executive order signed by President Kennedy in 1961 requiring that federal contractors “take affirmative action to ensure that applicants are employed, and employees are treated during employment, without regard to their race, creed, color, or national origin.” In 1967, President Johnson amended this, and a subsequent measure included sex, recognizing that women also faced many discriminatory barriers and hurdles to equal opportunity. Meanwhile, the Civil Rights Act of 1964 only included sex in the list of prohibited forms of discrimination because conservative opponents of the legislation hoped that including it would sway moderate members of Congress to withdraw their support for the bill.

My own narrative intersects with affirmative action at key points. I was born in 1961, the year President Kennedy started requiring federal contractors to “take affirmative action.” When I started applying to colleges in Texas in the late 1970s, my father – who claimed Indian heritage – urged me to “check the box” for Native American on my college applications and to pursue student loans based on this (for me) faux-identity. Years later, with PhD in hand, I began the often painful task of getting turned down for a tenure-track job, and being told by a white colleague on the search committee that they “had to give it to the Latina,” who, it was implied, was less qualified than I for the position (more about this in a moment).

So, where’s the evidence that we, as white women, are the main beneficiaries of affirmative action policies? Well, there’s lots of it – but it can be hard to find, as Jennifer Hochschild points out (Affirmative Action as Culture War. In: The Cultural Territories of Race: Black and White Boundaries. edited by Michèle Lamont. Chicago IL and New York: University of Chicago Press and Russell Sage Foundation; 1999. pp. 343-368).  According to the United States Labor Department, the primary beneficiaries of affirmative action are white women. The Department of Labor estimated that 6 million white women workers are in higher occupational classifications today than they would have been without affirmative action policies. This pays off in dividends in the labor force and to (mostly) white men and families. You can see how some of these benefits accrue to white women in the following infographic from the Center for American Progress (from 2012):

While people of color, individually and as groups, have been helped by affirmative action, but data and studies suggest that women — white women in particular — have benefited disproportionately from these policies. In many ways, affirmative action has moved white women into a structural position in which they share more in common with white men than they do with black or Latina women.

Another study shows that women made greater gains in employment at companies that do business with the federal government, which are therefore subject to federal affirmative-action requirements, than in other companies — with female employment rising 15.2% at federal contractors but only 2.2% elsewhere. And the women working for federal-contractor companies also held higher positions and were paid better. Again, this data often lumps “all women” together (without distinguishing by race), so it’s a bit of a fuzzy issue.

Even in the private sector, white women have moved in and up at numbers that far eclipse those of people of color. After IBM established its own affirmative-action program, the numbers of women in management positions more than tripled in less than 10 years. Data from subsequent years show that the number of executives of color at IBM also grew, but not nearly at the same rate.
Given these incredible gains by white women, it might seem logical that this demographic would be among the biggest supporters of affirmative action.  This is not the case. At least when it comes to education, it’s white women who have been at the forefront of lawsuits brought to challenge affirmative action.

When Abigail Fisher sued the University of Texas at Austin, she claimed that the University had discriminated against her in the undergraduate admissions process.  As you probably know, this case went all the way to Supreme Court. What you may not know is that post-Bakke (1978), the people suing universities for discrimination in the academic admissions process have been white women: Abigail Fisher (Fisher v. University of Texas); Barbara Grutter (Grutter v. Bollinger); Jennifer Gratz (Gratz v. Bollinger);  and Cheryl Hopwood (Hopwood v. Texas). 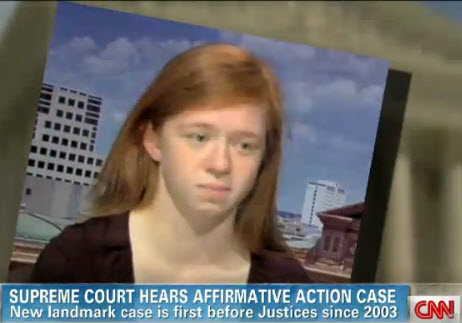 So, what’s up with white women? Why are white women playing the aggrieved party when we – as a protected class – have gained so much from these policies?

Let’s go back to the story I mentioned of the tenure-track job I did not get (one of many, for the record).  I happened to know the Latina woman who was also in competition for this job, and we were identically well-qualified for that job. There was virtually no difference between us as applicants for that position. We’d both taught at that institution as part-time or non-tenure-track faculty, students liked us both, we had the same number of publications at that point (somewhere between zero and one), and we both really, really wanted that job.

She got it, I didn’t, that’s how it goes.  On to the next thing.  (And, as life does with such disappointments, today I’m grateful to have not gotten that job, but I digress…)

The fact that the white person on the search committee made a point of telling me that they “had to give the job to her” is, in my view, a manifestation of color-blind racism.  Part of what he was saying to me was, “if things were fair, if there weren’t affirmative action, you would have had this job.” In a way, he was inviting me to say, later, in the re-telling of this story: “I didn’t get this job because of a Latina….”  This is precisely the form of color-blind racism that Eduardo Bonilla-Silva, Amanda Lewis, and David G. Embrick point out in their work. ( ““I Did Not Get that Job Because of a Black Man…”: The Story Lines and Testimonies of Color-Blind Racism.” In Sociological Forum, vol. 19, no. 4, pp. 555-581, 2004).

I choose to resist such a re-telling of that story because it is not true.  I resist such a re-telling because it supports other untruths about who is deserving, qualified, and should be in leadership positions.  But I know that such resistance is relatively rare among white women. And, I think this is where some of the explanation begins for why it is white women who are suing to challenge affirmative action.

To risk stating the obvious here, I think that what’s happened with Abigail Fisher is that despite her incredibly privileged structural position within the U.S., she still feels aggrieved because her expectation, growing up as a white girl, that she was entitled to an education at the top university in her state even though she didn’t have the grades to qualify.

When confronted with the reality that she didn’t get in to her top school, the explanation that occurred to her is that some person of darker complexion and lesser qualifications had taken her place. Fisher, like so many white women of her generation, believe that their peers who are black and Latina have it “easy” when it comes to getting into college, as if they only had to send in their photograph with their application. Contrast Fisher’s perceived struggle with the #itooam Harvard campaign launched by social media savvy students there about the racial discrimination they face. 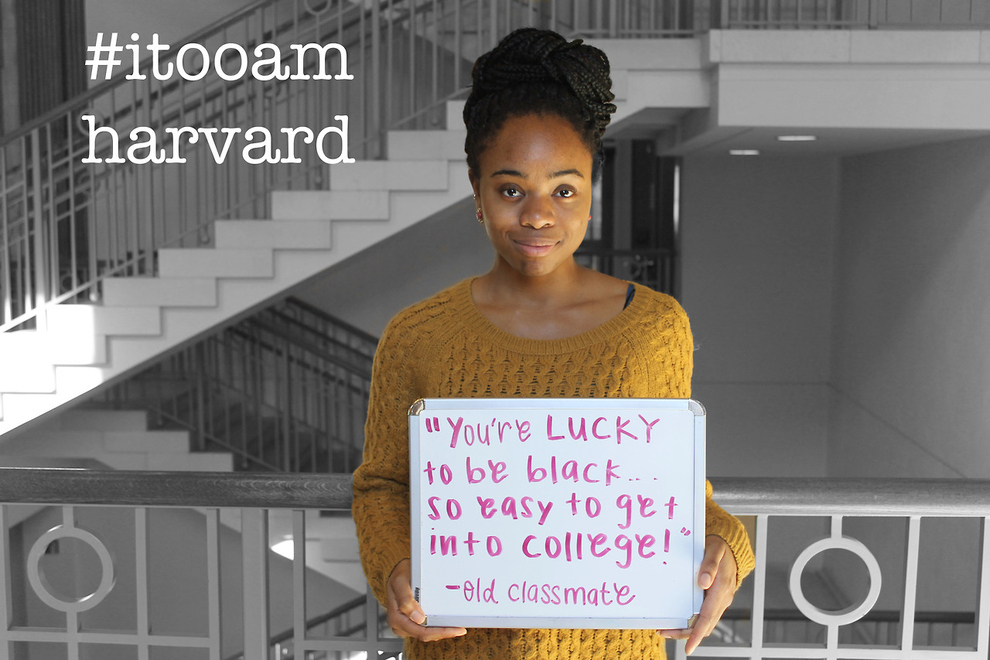 What Fisher was asserting in her lawsuit is a stake on the terrain of “racial innocence” because central to her claim, laden though it is with race, is that her denial at the doors to the University of Texas was based on an unfair reliance on race as a criterion for admission. This claim for “racial innocence” is at the heart of the backlash against affirmative action, as Jennifer Pierce has noted in her work (“Racing for innocence”: Whiteness, corporate culture, and the backlash against affirmative action.” Qualitative Sociology 26, no. 1 (2003): 53-70).

The claim on “racial innocence” seems a tenuous one at best for white women as both the prime beneficiaries of affirmative action, and some of its most ardent critics.

I’ll be back next Tuesday with another installment of the Trouble with White Women series, to discuss the recent admonishes to ‘lean in” to corporate feminism.