Today begins a series of posts about white women and white feminism.  There is something troubling to me in the pattern of white women’s behavior and white feminism’s response to inequality that I want to examine in long form. When this photo appeared last week on January 19 – celebrated as MLK Day in the U.S. – of Dasha Zhukova, sitting on a chair made from the mannequin of a black woman, many people were outraged.  Or, in the words of one British news outlet, the photo sparked a “racism row.”  The editor of the magazine interviewing Zhukova has since apologized, saying, “We are against racism or gender inequality or anything that infringes upon anyone’s rights.” The chair was designed by Norwegian artist Bjarne Melgaard.  Zhukova, the woman pictured said (through a spokesperson), it “reinterprets art historical works from artist Allen Jones as a commentary on gender and racial politics.” 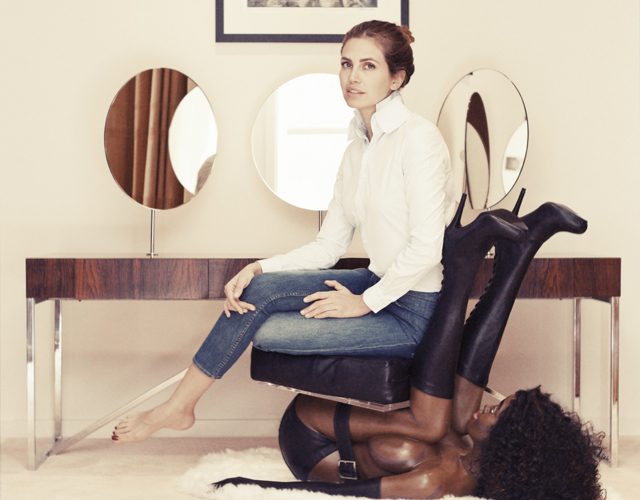 I, too, was outraged when I saw this photo and initially dismissed the apologies as predictable non-apology apologies. But, upon reflection, I think that this piece of art rather succinctly captures both the historical position of white women vis-a-vis black women and the current position of white feminism vis-a-vis feminists and womanists of color.  This series is meant to explore these ideas in more depth over an extended period of weeks. I’ve written about the phenomenon of white women and white feminism before (here, here and here). In the series, I’ll draw on the scholarship in this area to offer a more in-depth analysis of some of the recent outrages.

I should probably begin by saying that some of my closest friends are white women. I, myself, am a white woman.  I have been helped in my career by white women, many of them white feminists. And, perhaps predictably, I come from a long line of white women ancestors.  This is me (about 1962) in the arms of my great grandmother (“Little Granny”), and next to her is my grandmother (“Big Granny”) and my mother in the hipster glasses and chic polka dots. 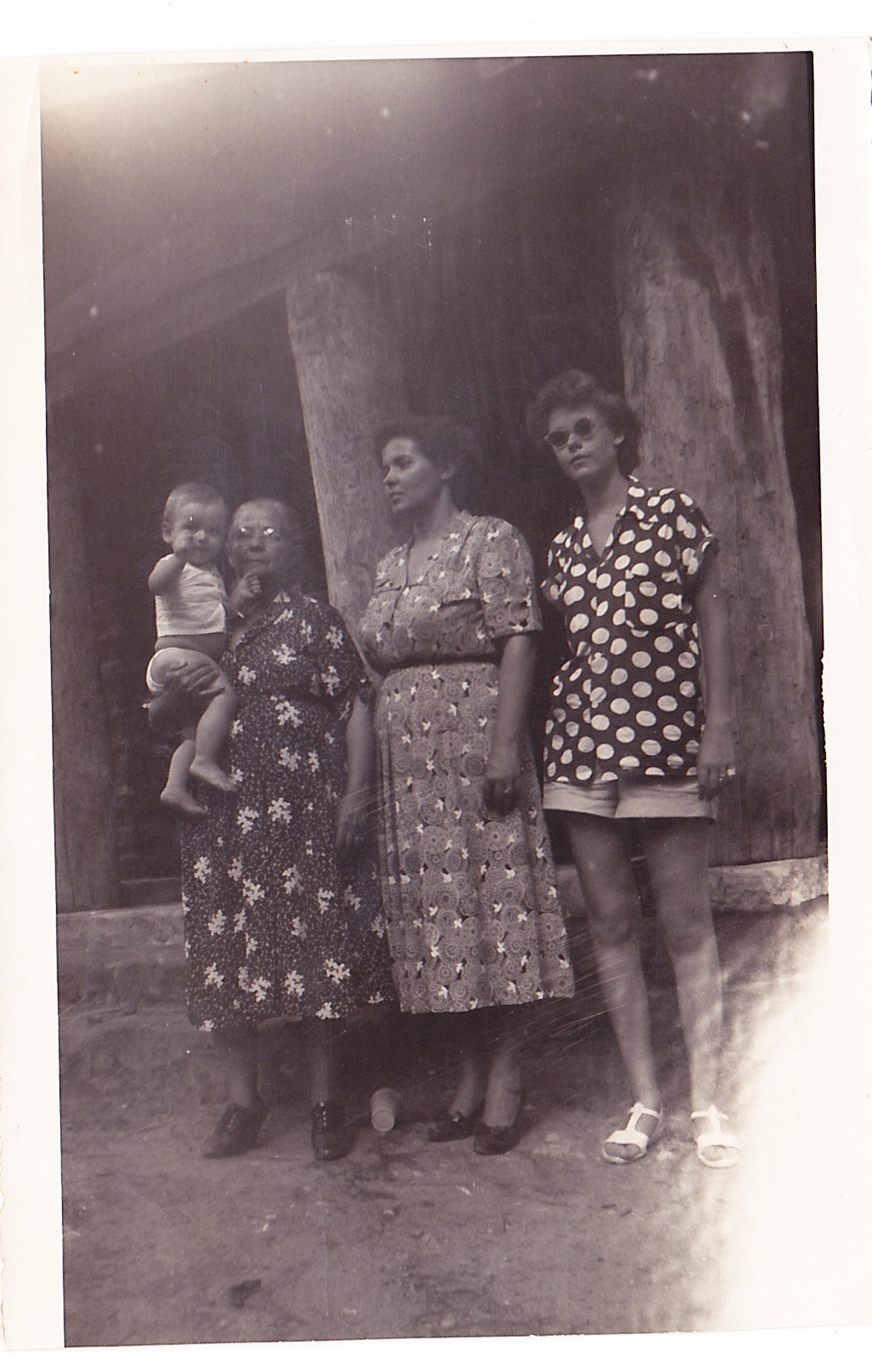 The other thing that you should know about these women, my ancestors in Texas, is that none of them made it past the 8th grade in school. All of them were married by the time they were 15 years old, and as a point of pride they would have me tell you, not one of them pregnant *before* they got married.  I would add, of course, that they were all pregnant shortly after they married; most them were mothers by the time they were 16 years old.   Not me. I found feminism and got an education, and got the hell out. 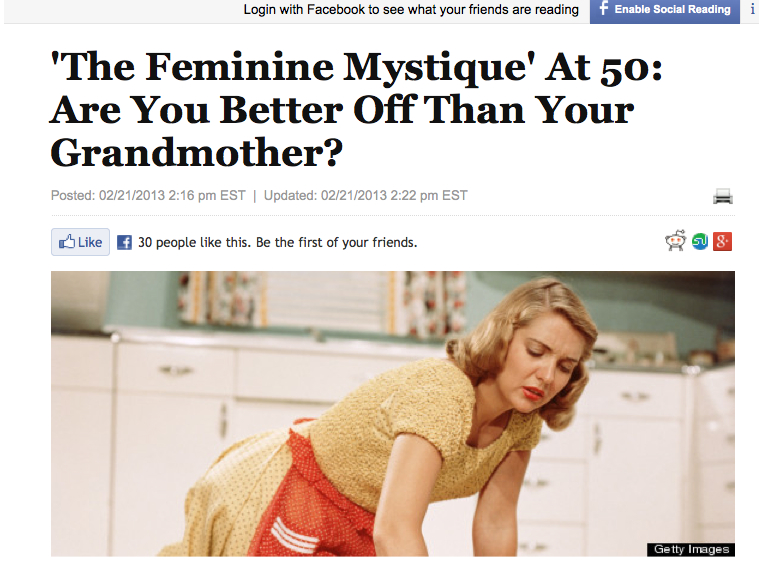 So when the anniversary of Betty Friedan’s Feminine Mystique came around last year and lots of people were asking, “are you better off than your grandmother?” my answer was a resounding, and deeply personal, yes! Yes, I am, thank you very much, feminism.

At the same time, I recognize that there is no whiter, more heteronormative feminism than Betty Friedan’s. The “problem that has no name” which was the centerpiece of that volume was really a problem of white, upper-middle class, well-educated, heterosexual women who wanted “something more” like Friedan herself.  Yet, Friedan was no friend to queer women, like me (lavender menace, anyone?), and her vision of feminism was not meant for the millions of women – working-class and women of color – who already worked outside the home.

So what’s the trouble with white women and white feminism?  I’m not sure exactly, but as a sociologist – one who studies patterned, human behavior – I see a pattern here.  Of course, as Joe (and lots of people have) pointed out, it’s white men who hold the power and are a social problem. There’s also a consistency to the way white women behave and white feminists respond that is both troubling and requires critical attention.

Justine Sacco certainly got more than her share of attention for this tweet, sent just before she boarded a plane from the U.S. to South Africa: 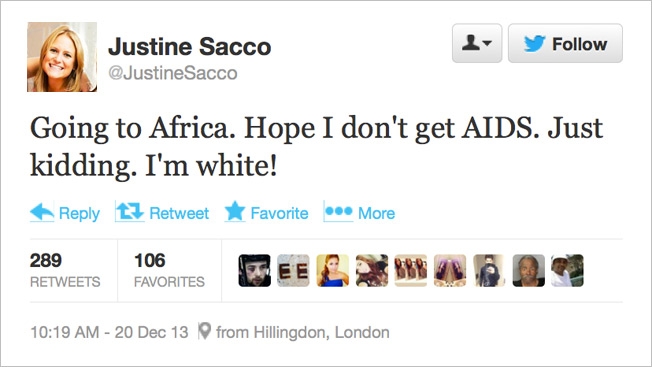 This incredibly offensive tweet sent by a professional PR executive, created a furor on Twitter. As Sacco was en route to her destination in Africa, the Twittersphere lit up with indignation and then, perhaps inevitably for Twitter, with humor.  Soon, the hashtag #hasJustinelandedyet began trending.  By the time that Ms. Sacco had in fact landed, she had been sacked by her employer.

If you missed all this furor, it may be because this unfolded over a few short days in late December when many people are traveling, spending time with family, or otherwise away from the interwebs.  Fortunately, there is data to illustrate Ms. Sacco’s ignominious rise to prominence, and her rapid descent into the oblivion of “Justine who..?”

It’s precisely this graph that prompts this long form series I’m launching.  If you know me at all, you know I love Twitter, but the rapid-fire, short-form exchange is not the ideal place to locate an extended critique of white women and white feminism.

So much of the post-Sacco analysis (if it can be called that) has turned sympathetic toward the fallen PR-exec and critical of Twitter for the incendiary atmosphere.  It’s not that I’m unsympathetic to her, it’s just that that is the wrong frame. The more relevant frame is that her behavior in sending that Tweet is emblematic of a broader pattern of behavior by white women that merits a longer, more thorough, historically contextualized analysis.

So, I hope you’ll join me here on for this series, where I’ll continue to put all this into a broader context.

Finally, in an attempt to not completely re-center and re-privilege whiteness and white women, our new editorial calendar will feature regular posts (and re-posts) from feminist, and womanist, women of color.  One of the key issues, of course, is that white women simply don’t read enough writing by feminists of color, so this is meant to offer an opportunity to correct that.