In December of last year an Asian feminist conversation took Twitter by storm under the hashtag #NotYourAsianSidekick. Designed to create much-needed but difficult-to-find space for discussing justice in the Asian American community, participants tweeted about everything from “media representation of Asian women to the way the prison industrial complex erases Asian Americans and Pacific Islanders in its demographic tracking”.  A groundwell of interest caused the hashtag to go viral globally, garnering 45,000 tweets within 24 hours, appearing in 95 million feeds across the next 3 days. Tanya Maria Golash-Boza covered it for Racism Review here, noting some of the social science evidence about discrimination against Asian Americans.

A month later, the hashtag is still trending. In fact the discussion has so deeply shown its importance that it has transformed into something of a movement with its own website and hosted forums that aim to continue “bringing conversations between artists, activists, and academics” about “everything from using Twitter as a platform for agitation to interracial solidarity to disability to queerness.” It has since generated widespread and well-deserved attention much of which you can easily locate and peruse via Google search.

Yes, it’s true. I’m on Twitter @multiasianfams. I have a love-hate relationship with social media but in my view there’s simply too much happening around race in that arena and online to ignore it. Case in point, I happened to hear about #NotYourAsianSideKick before it launched and participated at the very beginning for an hour. Something that got quickly lost in the explosive hype surrounding the trend (which has since been solely credited to activist Suey Park) was that it was originally co-hosted by Park and fellow activist Juliet Shen. To get the convo going, the 2 friends threw out a series of thoughtful questions with Park first up and Shen quickly following. Now while I think overall #NotYourAsianSidekick was and is a gorgeous and deeply needed movement to be heard, and even though plenty of mixed race people chimed in throughout – honestly I felt on the fringes of the conversation before it even began (as I usually do) being a multiracial person who can’t align fully with mono- categories like Asian. There was really only one moment that jumped off the screen at me and really connected to my lived/mixed experience, when Shen asked: 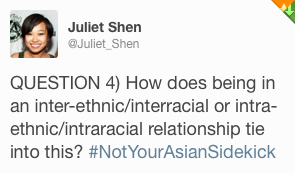 In fact hers was the only question that specifically addressed issues of interraciality possibly cracking the door to include a broader discussion of multiraciality in the hashtag and the Asian community at large. But sadly just a handful of women (including Park & Shen) responded before the discussion dashed off in another direction: 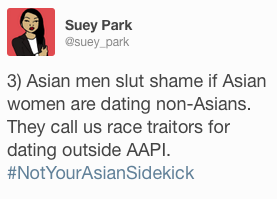 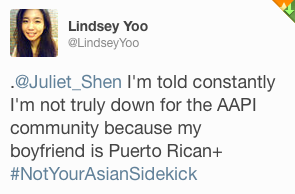 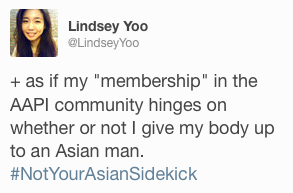 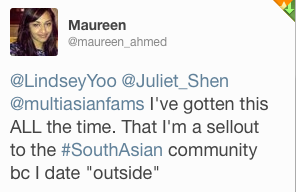 I thought #NotYourAsianSideKick moved away from this topic too quickly and decided to to contact some of the brave women who had spoken up for a deeper exploration. Interviews with several of these women follow, all words and images used here with their permission. 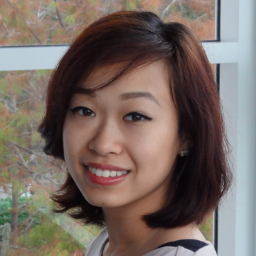 “When I date interracially friends, especially within the Asian American community, are quick to criticize or judge. There’s often that split second after I tell them the race of my partner that I see this change occur on their expression. I suddenly lose credibility as a writer, activist, and member of the community. Strangers are even worse. Because I blog, contacting me is easier than for the average person. I usually get about 1 piece of hate mail a week, often more if I write on something ‘controversial’ such as interracial relationships. The hate mail will range from disappointment to violent threats, to name calling, to everything negative under the sun. I have been called a race traitor, a house slave, and many more horrible things…I [still] see much criticism and backlash against interracial relationships…there is much work to be done.” 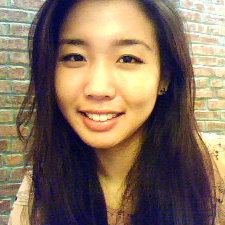 “I’ve dated interracially enough that my [Korean American] family is no longer shocked when I introduce them to non-Korean partners. But my extended family in Korea has told me more than once to at least stick to white or Asian men; they want me to stay away from ‘darker’ men. They assume that non-white and non-Asian men are sexually and morally deviant — especially Black men… Some friends have commented on ‘how cute’ my mixed kids would be if my boyfriend and I ever decide to have a family, and others have pointed out to me that the existence of relationships like mine show how improved race relations have become in our country. It’s always awkward trying to point out the problematic assumptions in those types of reactions — especially since they’re presented as appreciative statements and compliments…Interracial relationships might be more commonplace and more accepted, but Asian men and Black women are still the least likely to out-marry, and they are the least desired demographics in studies of online dating activity and behavior.” 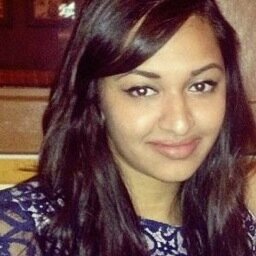 “When a South Asian woman dates outside of her race, or when a Muslim woman dates outside of her religion, her society will negatively respond (the severity of which changes from individual to individual). These trends stem from patriarchal expectations that a woman is responsible for continuing the heritage of her ancestors in a foreign land…Once she leaves her community, her children (because after all, she is expected to have them) will seldom be able to carry on those traditions, because…the male [is] responsible [for passing] on his customs to the family…While I think society as a whole has exceedingly become more welcoming towards interracial relationships, I believe there is still great resistance in smaller ethnic and religious enclaves throughout the United States. While new wave of immigrants continue to bring rich and vibrant traditions to this country, they often at times also bring with them racial prejudices against other communities besides their own.”

We can see through the testimonials of these young women that interracial mixing is sometimes still viewed very harshly which has obvious implications for children that may come later. It is an important subject that should be addressed in every community. Yet interracial/multiracial got bumped off its chair pretty early at the #NotYourAsianSidekick table. I can’t say I’m surprised. I keep seeing this happen despite the fact, as I have mentioned before, multiracial is the fastest growing youth group in the US; something of especially significance for the API community which has the highest rate of outmarriage (interracial and interethnic).

The struggle for racial equality in this nation which has historically coalesced around mono-aligned groups is now also struggling to know what to do with the growing visibility of multiracials. In its confusion, and often the faulty assumption that maybe race just doesn’t apply, mixed race peoples are frequently just left out altogether. But more and more young people are beginning to identify outside traditionally defined single designations begging the question, are we going to stick with a handful of racial categories and if so, who do we allow in them? Who qualifies as “Asian”? The simple truth is — we need to make more space for inter- and multi-in race discourse. Great convos about “the now” without a nod to “what’s next” aren’t fully prepared for the future that’s imminent, and waiting on our doorstep.*

I would like to express my deepest gratitude to the women who were willing to share their experiences and identities with us here. Speaking up is dangerous trailblazing work. Their willingness to do so paves a path for others to be heard. I ask that readers please receive their testimonials with respect and listen to their words without being predatory.

*Note: A multiracial Asian forum has since been proposed to Suey Park who was very open to the idea and will likely do so in the near future.