Today marks the 50th anniversary of the white supremacist bombing of the 16th Street Baptist Church in Birmingham, Alabama that killed four young girls. The girls’ death and the long wait for justice raises important questions about civil rights, racism, and the nature of restorative justice. 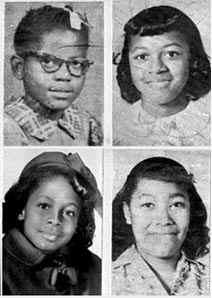 If you’re not familiar with the case, you can begin by listening to this interview from 2008, Mr. Christopher McNair – father of the youngest victim – offers his recollection of that devastating day with NPR reporter Michele Norris. And, if you haven’t seen it, I urge you to watch Spike Lee’s documentary about the bombing, “4 Little Girls,” which is quite compelling.

This year, President Obama awarded the four girls with the Congressional Gold Medal, the highest civil honor.  However, it took many decades before the bombers – four white supremacists, Robert Chambliss, Herman Cash, Thomas Blanton and Bobby Cherry –  were brought to justice.

The decades-long-delay in prosecuting the assailants in this case raises vexing questions about the nature of “justice,” questions that  Willoughby Anderson takes up in a 2008 analysis (“The past on trial: Birmingham, the bombing, and Restorative Justice.” California Law Review 96, no. 2 (2008): 471-504). Anderson writes:

“The community, media, and scholarly responses to these trials point to the way that a crime’s effects can reach far beyond the individual perpetrator and victim. In the context of unresolved civil rights-era violence, one murder or bombing inevitably expands outward and into the larger story of segregation and massive resistance; into the systemic, racially-based injustices of southern law enforcement; and to the New South’s willingness to move quickly forward without reconciling its troubled past. Restorative justice theory, a reform movement within the criminal justice system, can help contextualize the broad consequences of these crimes. Taking the Sixteenth Street Baptist Church as an example, I use restorative justice theory to expand the concept of harm resulting from this one incident. Rather than understanding the crime in traditional terms as an abstract harm against the state, we must imagine it as an act with consequences for the victims, the community at large, the offenders themselves, and the relationships between all three.”

I find Anderson most persuasive in his argument when he takes up the “harm to community” from these crimes, and offers a context for the return to prosecution after many decades. He writes:

“But what can this criminal justice reform movement teach us about approaching historic unsolved crimes from the civil rights-era? The responses of communities, the media, and scholarly observers to renewed civil rights-era investigations were critical and mixed. Some saw justice long-delayed, but ultimately achieved. Others questioned the value of trials delayed for so long. Most simply wondered about the years of non-prosecution. Murder trials have a limited ability to address broad concerns about systemic injustice and the passage of time between an offense and its prosecution. These infamous crimes exposed the harm inflicted on whole communities through the violence of segregation and selective enforcement of criminal laws, a harm that cannot simply be understood as Alabama v. Defendant.“

His argument, to take a restorative justice theory frame to examine the Birmingham bombing, is less well developed when it comes to the perpetrators.  In discussing the impact of the trial on the family of Bobby Cherry, Anderson writes:

“The criminal justice context also overlooked the plight of the families of the perpetrators. The effects of the crime on Cherry’s family strife illustrate how the bombing’s harms were not restricted to one side of the equation. Thomas Cherry, estranged son of the bomber, describing how his childhood was blighted by the crime, forcing his family to relocate to Texas, and providing the subject of conversation at every family reunion. The son was subpoenaed to testify in front of the grand jury, and the newspapers described him as “anguished over his father but . . . also haunted by the bombing.”  After the verdict, Thomas Cherry tried to explain how the crime cast a long shadow: “[i]t leaves you an awful empty feeling in you [to] know that your father is going to the penitentiary for the rest of his life.”  Cherry’s trial also featured conflicting testimony from ex-wives and a loyal grandson as to his character, the meaning of his Klan membership, and his motives for racial violence. After the verdict, the Birmingham Post-Herald ran a large picture of Cherry’s daughter Karen Suderland sitting on the ground weeping. One wonders what the effect of the competency protests might have been on this wide spectrum of family members, both estranged and otherwise. How could the trial possibly have brought them a sense of closure? In evaluating harms and victims, an inquiry into the effects the crime has on the offenders’ families is necessary, no matter how much this complicates otherwise simplistic condemnation of criminal offenders.“

While I’m generally in favor of restorative justice as at least one, possible way out of the current mass incarceration debacle, I’m skeptical of such an approach here. Anderson seems well aware of the context of racism and white supremacy in creating the harm of the bombing, but once it comes to the perpetrators and their families, those slip from view. Instead, Cherry becomes merely an “offender” whose family has suffered because of their “crime.” When Anderson writes that the son was forced  “to relocate to Texas,” and discuss the bombing “at every family reunion,” speaks to a kind of minimal (if any) harm.  What this version of restorative justice doesn’t address all the ways in which the descendants of the perpetrators still benefit from and are complicit with certain forms of white supremacy.

Fifty years on from the bombing of the 16th Street Baptist Church in Birmingham, Alabama that killed four young girls we are still struggling to understand what the nature of restorative justice might look like in a society that remains mired in racism.