On this Labor Day, I’m thinking about the legacy of stolen labor.  While Labor Movement-created-holiday is meant to commemorate the “social and economic achievements of American workers,” a post from a friend, Son of Baldwin, has me thinking about labor that was not freely given, but rather was taken from people and for which they were not compensated. 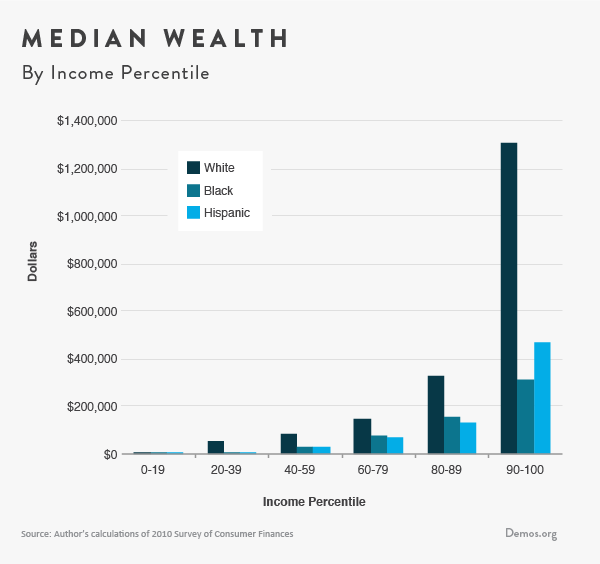 (Graph from Demos – Stats from 2010 Survey of Consumer Finances)

As you can see, black and Latino families have much less wealth than white families, even when you compare  within the same income groups.  Matt Bruenig, writing at Demos, asks, “why is this the case?” and then answers his own question with the following:

“There are many factors, but one in particular looms large. It turns out that three centuries of enslavement followed by another bonus century of explicit racial apartheid was hell on black wealth accumulation. Wealth accumulation opportunities haven’t exactly been evenly distributed in the last half century either. Because wealth is the sort of thing you transmit across generations and down family lines (e.g. through inheritance, gifts, and so on), racial wealth disparities remain quite massive.”

And, indeed, if we look at the wealth accrued to those who enslaved others, just in the U.S., the estimates from economists put those numbers in the trillions, in 2011 dollars. 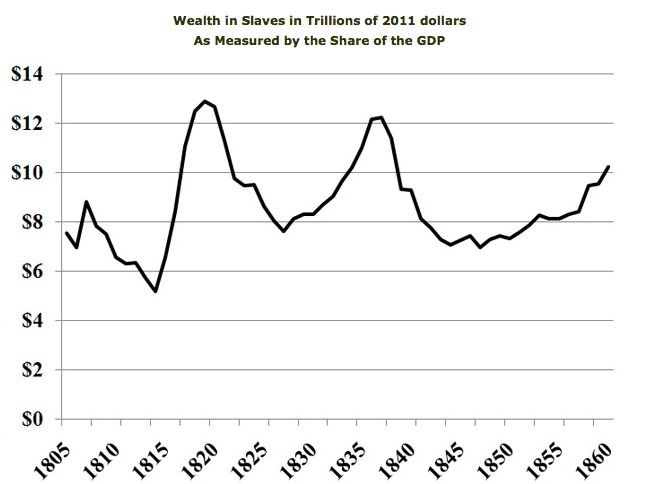 In their understated, scholarly language, the creators of the chart  – Williamson and Cain – write:

“Slavery in the United States was an institution that had a large impact on the economic, political and social fabric on the country. This paper gives an idea of its economic magnitude in today’s values. As noted in the introduction, they can be conservatively described as large.”

So, the impact of slavery in the US was large?  Got it. But slavery ended in 1865.  Everything’s been fine since then, hasn’t it?

Deadria Farmer-Paellmann is researcher who is documenting the way contemporary corporations benefit from slavery. Many of the companies we use today initially established those profitable entities by profiting from stolen labor. For example, many of the current insurance companies began by insuring slaves, as with an 1854 Aetna policy insuring three slaves owned by Thomas Murphy of New Orleans. Farmer-Paellmann has located evidence of connections to slavery from a number of other corporations, including:

In 2000, Aetna expressed “regret for any involvement” it “may have” had in insuring slaves. Today, the company stands by that statement and says it has been able to locate “only” seven policies insuring 18 slaves. “We stood up; we apologized; we tried to do the right thing,” said Aetna spokesman Fred Laberge.

That was all a long, long time ago. Aetna apologized.  Besides, what’s all this got to do with now, today? These companies built their wealth, either partially or in whole, on labor that was stolen from people who didn’t have a choice and who were never compensated for that labor.

These corporations with legacy-connections to slavery are not the only ones profiting from stolen labor now. For-profit corporations are making millions off of locking people up. CCA, which I’ve written about here before, and The Geo Group are among the worst offenders here. 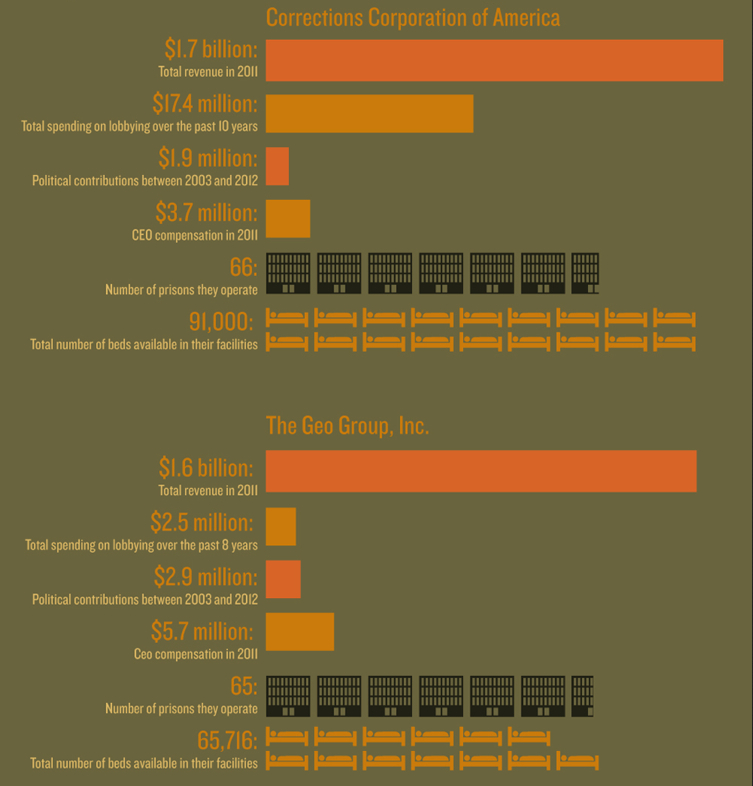 Federal Prison Industries, also known as UNICOR, is a US-owned government corporation created in 1934 that uses penal labor from the Federal Bureau of Prisons to produce goods and services (UNICOR has no access to the commercial market but sells products and services to federal government agencies). The statistics about UNICOR’s use of prison labor, perhaps the quintessence of contemporary stolen labor, are staggering.

These wages at federal prison are criminal, and the ones at state facilities are even worse. Nevada, for example, pays inmates just .13 cents/hour for their labor.

There’s no possibility of organizing these workers, however, since the U.S. Supreme Court has upheld a North Carolina warden’s ban on prisoners’ right to form a labor union.

To address this legacy of stolen labor, some have called for reparations.

US Rep. John Conyers has introduced H.B.40, Commission to Study Reparation Proposals for African Americans Act, into every session of Congress since 1989, and vows to keep doing so until it is passed into law.

In 2002, a group of U.S. legal scholars led by Charles Ogletree (Harvard) started litigating the legacy of slavery to get redress from some of the corporations that benefited. A number of people, mostly political conservatives, oppose reparations.

More recently, representatives from more than a dozen Caribbean nations are uniting in an effort to get reparations for slavery from three former colonial powers: Britain, France and the Netherlands. Leaders from The Caribbean Community (Caricom)  are launching a united effort to seek compensation for the lingering legacy of the Atlantic slave trade.

A much more modest proposal, as Bruenig of Demos suggests, is a steep, progressive inheritance tax in the U.S.  If the proceeds of such a tax were directed to a full-fledged sovereign wealth fund that pays out social dividends, we could address a number of social ills at once.

It’s actually not hard to think of ways to address the legacy of stolen labor and stolen wealth. It simply involves the transfer of capital. And, there is precedent for it in the U.S.

The federal government reached a consent decree with a class of over 20,000 black farmers to compensate for years of discrimination by the Department of Agriculture. Previously, the government also approved significant compensation for Japanese-Americans interned during World War II and paid reparations to black survivors of the Rosewood, FL [pdf], massacre.

What we lack to address the legacy of stolen labor and the contemporary reality of a racial wealth gap is the collective political will to do the right thing.