Proms serve as a strong indicator of the racial tension in “post racial” America.  The Saturday April 27, 2013 edition of the New York Times includes a news story about a small, rural town—Abbeville, Georgia—and Wilcox County High School where some students are challenging the tradition of the a segregated prom.

A student, Mareshia Rucker who is African American, watched from a crouched position in a car as her White classmates attended the White Prom. Like all of the Black students she was not invited. From her hidden position in the car she thought about this:

“These are people I see in class every day… What’s wrong with dancing with me, just because I have more pigment?”

The excuses given for continuing segregated proms, mostly from the white parents, was that the students had a different taste for their music, dancing and tradition. New York Times columnist Robbie Brown explains it this way:

At Wilcox County High School since integration took place the proms have been organized as private, invitation-only events that are funded and sponsored by the students parents and not the school.

A week after the White Only Prom took place a small group of Blacks and White students raised funds, organized and held an integrated prom. The school board has said it will soon vote on a new structure for proms, sponsored by the school and not parents.

In this day and age, supposedly a “post racial America,” some argue that race-based proms are an enigma.  But are they really?  Since the 1970s public schools have re-segregated.

In Charleston, Mississippi located in the heart of what is known as THE DELTA with a total population of less than 3,000 and a median household income of less than $21,000, Charleston garnered national attention in 1997 and again in 2008 when the issue of segregated senior proms was in the news.

The national spotlight for Charleston came because the academy award winning African American actor Morgan Freeman offered to fund the school’s prom in 1997—but only if it were open to both Black and White students.  His offer was turned down by the school board and white parents (the Black population outnumbers the White population in Charleston).

Some 10 years later Freeman made the offer again and this time it was not only accepted but the Canadian documentary film crew headed by Canadian filmmaker Paul Saltzman was interested in making a documentary, Prom Night in Mississippi.

Like other short-lived celebrations (a national championship one season; a last place finish the next), one has to wonder in this era of post-racialism how deep is social segregation?  As the illustration below reveals, even when school systems are integrated the proms remain segregated. 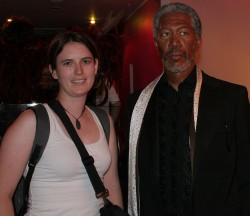 Racial segregation in the Deep South did not end with the US Supreme Court decision in Brown v. Topeka, Kansas in 1954. 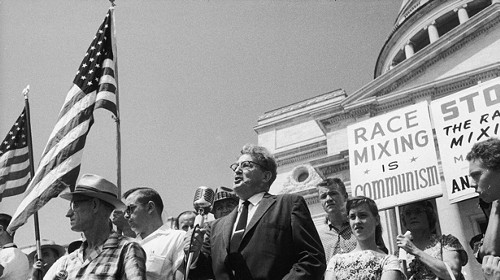 In the BROWN decision Chief Justice Earl Warren, writing for the majority, said this:

Segregation with the sanction of law, therefore, has a tendency to [retard] the educational and mental development of negro children and to deprive them of some of the benefits they would receive in a racially integrated school system… We conclude that, in the field of public education, the doctrine of “separate but equal” has no place. Separate educational facilities are inherently unequal. Therefore, we hold that the plaintiffs and others similarly situated for whom the actions have been brought are, by reason of the segregation complained of, deprived of the equal protection of the laws guaranteed by the Fourteenth Amendment.

Across the entire history of the US, the majority of African Americans attended inferior grammar and secondary schools.  Those seeking to attend white schools in the north, including colleges and universities, were often denied access.  Some schools in the north desegregated voluntarily and in some cases early in the 20th Century, but schools in the south resisted integration severely and systematically.  In some cases movements to integrate even under court order erupted into violence.  The integration of Central High School in Little Rock Arkansas was so contentious that President Eisenhower sent National Guard troops to protect the eight young men and women attempting to attend school there.  Similarly, when James Meredith attempted to integrate the University of Mississippi a near war broke out forcing President Kennedy to send in armed troops.  Governor Ross Barnett closed the Ole Miss campus in response.

The Brown v. the Board of Topeka, Kansas decision (see above) which guaranteed African Americans the right to attend any public school was intended to offer access to the institution of education in the United States.  Yet, it has been only partially successful.  First of all the Supreme Court decision was resisted.  It was intensely resisted in the Deep South so much so that many southern school districts were not integrated until the early 1970s, nearly 20 years after the historic decision.  The most severe resistance to school integration was in Mississippi.  The resistance movement resulted in the development of a set of private, often religiously affiliated, academies, colloquially referred to as “seg academies” which acknowledges that they were and continue to be entirely segregated; as privately funded schools they are not required by the Brown decision to integrate nor are they required to meet performance standards or be accredited.

Sara Carr’s article in the December 2012 Atlantic   captures the raison d’être of the segregation academies that sprang up in states like Mississippi, Alabama and all across the south after the Brown v. Board 1954 decision:

“These schools were started to keep white children away from blacks,” said Wade Overstreet, a Mississippi native and the program coordinator at the national advocacy organization Parents for Public Schools. “They’ve done an amazing job of it.”

The unintended consequences from this self imposed segregation for Whites has not been seriously addressed in that those White kids from the post-Brown segregated south were stymied in their education resulting in their inability to attend elite northern liberal arts colleges.  Why?  Because by setting up “seg academies” that did not have to adhere to performance standards the perception of these schools outside of the south is that they were not delivering the type of college prep education that would be required to be successful in college.  This perception is further exacerbated by the overall impression from the Civil Rights Movement that southerners are “backward.”

Incredibly, forms of deep social segregation continue today no place more clearly than in the school system that long-standing U.S. tradition of the SENIOR PROM!

The point of these illustrations is that its not simply the integration of schools that will produce integrated proms.  The concerns that White parents expressed in the 1960s and 1970s about their children sitting in desks next to Black children—which I would argue was really a concern about integrated friendships and heaven forbid integrated romances—has taken on a life of its own through the debate and struggle around the prom.

My theoretical underpinning for “Prom Night in the Deep South” is Joe Feagin’s WHITE RACIAL FRAME, in which he says (129):

“Even when whites do racist performances targeting Americans of color, the old racial frame accents that they, as whites, still should be considered to be “good” and “decent” people.  The dominant racial frame not only provides the fodder for whites’ racist performances, but also the means of excusing those performances.”   Such back-stage actions are interpreted as harmless, as “no big deal,” and often as just good interactive “fun.”

This frame allows White parents and school board members in the Deep South to see themselves as “better” than their kids and other White students viz., their Black schoolmates and, therefore, worthy of still holding the coveted segregated prom.

Further, the south as a whole was stunted by segregation which requires the setting up and running of a two-tiered system—politically, economically, socially, recreationally, with regards to health care and education— that proved to be not only expensive but also backward (Smith and Hattery 2010).  And, since neighborhoods, communities, whole sectors of large cities are segregated it stands to reason that schools will continue along this path as well (Hattery & Smith 2012).

And, as long as banks continue the practice of “redlining” as long as differential access to home mortgages exists and as long as major legal statutes against social segregation are not upheld, we will continue to see pockets of segregation across the US and in the south.

Even in schools where White and Black students sit next to each other in class, the over-arching concern that White parents have about love across racial lines is the driving factor behind the move to keep proms segregated.

Orfield, Gary. 2011. “Segregated and Satisfied in the Southland?” Huffington Post