Henry A. Giroux, in a recent post entitled, “Lil Wayne’s Lyrical Fascism,” alleges “We have come a long way from the struggles that launched the civil rights movement over fifty years ago.”

After reading the actual article, due to the esteemed Dr. Giroux’s critique on the rapper Lil Wayne, it would seem “We” definitely have not arrived. Giroux examines not only the deplorable lines within Lil Wayne’s contribution to the remix of “Karate Chop” (Yes, it actually called this), where he declares he will “beat the pussy up like Emmett Till,” but more importantly Giroux lends a spotlight to the underlying condition that allows for racist, sexist, and historical mockery to take place within the 21st century. 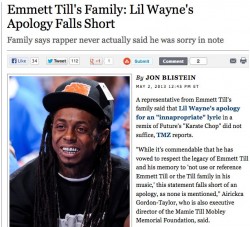 Giroux goes on to call into question the economic drive that fosters the media’s atmosphere consisting of poisonous and destructive attributes. These elements thusly seep through the “sleazemonger” which occupies our airwaves, satellites, and print. He also calls our society to the proverbial mat due to our collective lack of resistance to said subject. Importantly, Giroux comments on the existence of “a deeper order of racist ideology and commodification that is pushed to the margins of discourse in the neoliberal age of colorblindness.”

Those who follow his scholarship are aware Giroux has argued over the years that fundamentalist neoliberals who reject democratic idealism while praying to the gods of free market have gained the necessary financial momentum and social vigor to heavily influence the political and economic domains around the world like never before observed in history. In fact, they not only influence policy and political directions of those we elect to represent our interests, but they also seek to weaken those non-commodified areas within our communal space which serve as sources of conflicting critical discourse. Indeed, the mainstream media have become a brilliant source for accomplishing this charge. Due to their unwavering compulsion to gain profit, these free market fundamentalists hold almost no empathy in regard to their actions, which may create inequality, mortal anguish, and subjugation. Overall, the collective soul of a people and their democratic footing in this world is simply collateral damage to those seeking the all might “Dolla Bill Ya!”

I agree with Giroux in terms of the current state of neoliberalism and the erosion of democratic practices that is facilitated by use of the media. Malcolm X was right when he said, “The media’s the most powerful entity on earth. They have the power to make the innocent guilty and to make the guilty innocent, and that’s power. Because they control the minds of the masses.”

But at the same time when taking into consideration Giroux’s take on the neoliberal methodology in regard to using the media to gain profits through the use of racist and misogynistic messages (which are easily swallowed by the zombies that surround us), I strongly argue, simply, they are playing an old tune we as a world have been dancing to since the beginning. Remember, Joe Feagin contends racism and oppression are still viewed as normal parts of society due to the enmeshment of the White racial dogma embedded in the foundations of U.S. society. In addition, his concept, the white racial frame, spotlights a created set of organized “racialized” ideas and stereotypes that have the power to induce strong emotions. It is important to know these actions are based off of the U.S. historical enshrinement of a frame of thinking which at the center, is composed of a pro-white sub-frame (which takes notice of the superiority of Whites) and a demonizing anti-black sub-frame. In fact, institutional racism relies on the presence and mechanism of anti-Black attitudes and practices that are displayed overtly and covertly.

Therefore, what we are seeing today with the likes of Lil Wayne is nothing new. In terms of people of color attaching their own psychological chains to their advancement, this is nothing new as well. The power of racism and the allure of the white racial frame have the ability to ensnare those targeted for oppression into unconsciously adhering to their own demise. The historical and powerful speech by Malcolm X, “The House Negro and Field Negro,” although forceful, seems fitting:

There was two kind of slaves. There was the house negro and the field negro. The house negro, they lived in the house, with master. They dressed pretty good. They ate good, cause they ate his food, what he left. They lived in the attic or the basement, but still they lived near their master, and they loved their master, more than their master loved himself…If the master got sick, the house negro would say “What’s the matter, boss, we sick?” We sick! He identified himself with his master, more than the master identified with himself. And if you came to the house negro and said “Let’s run away, Let’s escape, Let’s separate” the house negro would look at you and say “Man, you crazy. What you mean separate? Where is there a better house than this? Where can I wear better clothes than this? Where can I eat better food than this?” There was that house negro. In those days, he was called a house nigger. And that’s what we call him today, because we still got some house niggers runnin around here…

If Malcolm were alive today, would he feel this is applicable to rappers like Jay-Z who has made million along his musical path calling women bitches?

Fascinating, due to having a baby daughter in 2012, he declared to never use the word again. Thank you Jay-Z. How about Lil Wayne and music mogul Russell Simons who hasve defiantly defended the current status and messages of hip/hop? Are they men under the illusion that they are in control and their pursuits? Are they purely focused on money and simply representing a faction of the neoliberal camp? But are they in reality the all encompassing “House Negros” affected blindly by the messages of subjugation.

Therefore. Dr. Giroux, the only difference I see today, beyond the democratic erosion of our society due to neoliberalism, is the advancement and use of technology in facilitating an old message that attempts to keep a white foot on the neck of people of color.