The Christian Right has come up with a new set of imagery that conflates religious racism with politics, indicative of how leadership from Blacks and American Indians become associated with the “hostile” and the “devil” that continue old paradigms. Here is a recent Facebook message making the rounds after the last debate. 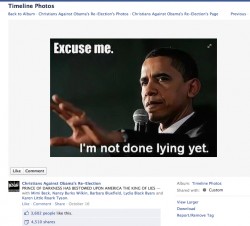 The caption reads: “PRINCE OF DARKNESS HAS BESTOWED UPON AMERICA THE KING OF LIES”
(From the Facebook Group “Christians Against Obama’s Re-Election” )

At the time of this post, the image above has 3,602 “Likes” and 4,510 “shares” on Facebook, so there are more than a few people for whom this kind of imagery resonates. (In another, related image on the same group’s page, Michelle Obama appears in – photoshopped – prison garb.)  The “Prince of Darkness” label is associated with Obama as the “King of Lies” when it is the Whitened version of U.S. history that relies on distortion and untruth, similar to how Whites coming into contact with Native spirituality, as MneWakan (spiritual waters) called it the Devil (Devil’s Lake, Devil’s Tower, etc.), as dominant icons associated with religion and being Christian, are used to depict leaders that oppose racial domination, as being evil, or the Devil (Prince of Darkness).

Within this frame, God is seen as being white or at least European, (Rev. Wright is seen as beguiling). That is why the “Prince of Darkness” imagery seems to resonate with the predominantly white readers that Romney must get to 60 percent, but without explicitly mentioning race. This is why Haiti is so instructive. I dealt with this in a photo taken in a Port-au-Prince church where Jesus is depicted as a black (thought light skinned) and John the Baptist as a darker skinned black man, on New Year’s Day, 1981, independence day there, as an example of communication discourse not only to show how God is thought to be white, but that it is sacrilegious to say otherwise. This leads to dichotomous or binary thinking in communication, showing why Black is Beautiful was contentious (it is a simple positive declarative phrase) because most whites were hearing that White is Not, or why Vine Deloria’s famous work God is Red, thrown into binary opposites, is unacceptable.

In Haiti, the notion of the racialized Other emerges along with the Papal Bull of 1493 which connects the non-Christian or heathen “Indian” as a racialized “savage” needing to be tamed, domesticated, and subordinated. The rationalization works well, extending to post-genocidal slave plantations’ “Black” of African descent, fully developed by mid-sixteenth century, as the greatest of race-based colonies, with Spanish and Portuguese (Brazil) followed by Virginia and Louisiana by the English, institutionalizing the whole racial morass into the system we know today. The underpinning is precisely the confusion about White, Christian or English (later Anglo-Saxon) which sees the lower order races, by skin-tone, associated with the Devil and anti-Christian (Muslim, Jew, etc.) peoples, which the newly formed “white elite” employ to maintain dominance (Joe Feagin, The White Racial Frame).

Today, the irony is more pronounced, in the announced passing of Russell Means, an early leader of the American Indian Movement, in many ways its most famous, precisely because he came to represent all things wrong about the United States of America and its treatment of the First Nations people who preceded its colonial forebears on this continent.

Imagery associated with AIM is the powerful takeover of Alcatraz prison island,  (imprisoned American Indian leaders in the past, similar to Mandela on Robbins Island) to the Trail of Broken Treaties in Washington DC, the takeover of the BIA, to the retaking of Wounded Knee, by Lakota elders to resurrect knowledge of genocidal killings of Indian peoples, countering dominant history of this country, with a paradigms of social justice pointing to a deeply racist, dominant group formation benefiting from slave systems for labor and genocidal conquest for land, all the while claiming it is a “democracy” – but for which people?
The white elite needs continued conforming to these racial paradigms to maintain its dominance, especially with an increasingly diverse population as its electorate. Obama represents both a threat and potential solution to this political problem. American Indian leaders are now acknowledged, but also represent a threat to the dominant discourse. Challenging these paradigms, falls to us and many others, since Obama’s removal will mean a temporary victory for white racial forces, continued control over the Supreme Court, and distorted racist rationalizations on historical democracy of the “Founding Fathers” as an obstacle to real progress.