In a recent interview, Stanford Professor H. Samy Alim discussed his new book, Articulate While Black: Barack Obama, Language and Race in the U.S. (Oxford University Press, 2012, co-authored with Geneva Smitherman). In case you missed it, here’s the short clip (about 7:00, with an ad I couldn’t remove).

Visit NBCNews.com for breaking news, world news, and news about the economy

Alim and Smitherman make an interesting argument about “code switching” – that is, moving from standard ‘white’ American dialect to a ‘black’ dialect. This facility with language is both a lightening rod for figures on the far-right in the U.S., such as Rush Limbaugh, and at the same time, lends Obama legitimacy in the eyes of many because it ties him to the legacy of Dr. King. 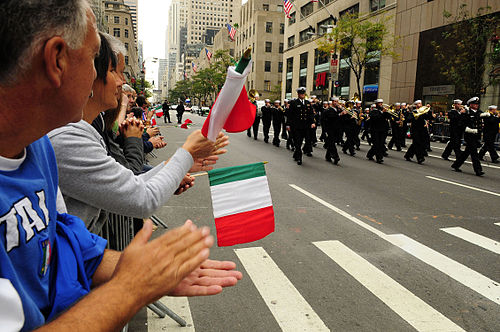 While the local news stations here relentlessly refer to the parade as a “celebration of Italian heritage,” I think it’s long past time we said “nevermind” to the myth of Columbus “discovering America.”  By celebrating Columbus, we replay the legacy of colonialism. Yet, despite the genocide that followed in his wake, some see the embrace of Columbus as a national hero as a response to racism and discrimination experienced here in the U.S.  Tommi Avicolli-Mecca writes:

And, like so many other holidays, this one is a bit misguided.   In point of fact, Columbus is a man with a tenuous link to contemporary Italy.  As you’ll recall from the grade school rhyme, Columbus “sailed the ocean blue” in 1492; contemporary Italy wasn’t a country until 1861.

There is a strong, radical history among Italian Americans that has been largely forgotten.  In their book, The Lost World of Italian American Radicalism (Praeger 2003), Philip Cannistraro and Gerald Meyer, help uncover some of this history.   Their edited volume shows that in contrast to their present conservative image (cf. Carl Paladino’s recent anti-gay remarks), Italian Americans played a central role in the working-class struggle of the early twentieth century.   Italian Americans were leaders in major strikes across the country—notably the Lawrence textile strikes of 1912 and 1919, the Paterson silk strike of 1913, the Mesabi Iron Range strikes of 1907 and 1916, and the New York City Harbor strikes of 1907 and 1919, as well as coal mining strikes. They also made important contributions to American labor unions, especially the revolutionary Industrial Workers of the World, the International Ladies’ Garment Workers’ Union, and the Amalgamated Clothing Workers of America. At the same time, they built vibrant radical Italian immigrant communities that replicated the traditions, cultures, and politics of the old country.   For example, Italian immigrants formed their own political and social clubs, mutual aid societies, alternative libraries and press, as well as their own orchestras and theaters, designed to promote and sustain a radical subculture.   This radical subculture was oppositional to both the hegemonic culture sustained by prominenti (the powerful men of the Little Italies) and the individualistic culture of capitalist America. Yet, for the most part, this radical tradition has been set aside in favor of the hagiography of Columbus.

This holiday, I’m saying “nevermind” to Columbus and cheering the radical history of Italian Americans.

Sorry for the interruption in posts here about racism, but the blog admins have been busy with other pressing demands. Joe’s away writing a new book, Jessie has been writing and administering several new grants, as well as teaching.

Alas, there’s been NO* shortage of news about racism, so posts here will continue.  Thanks for stopping by and for your patience. 😉

*Thanks David J. Leonard for catching the typo.