In 2011, the NYPD stopped and frisked people 685,724 times, and fully 87% of those searches involved blacks or Latinos, many of them young men, according to the New York Civil Liberties Union. There is a groundswell of protest growing against these racist police practices, yet too often, the voices of those most affected by it are not included in the discussion. Until now.

Filmmakers Julie Dressner and Edwin Martinez have created a documentary about one young man, Tyquan Brehon, who lives in one of neighborhoods in Brooklyn most frequently targeted by the police. In this short clip (5:55) which appears in The New York Times, Tyquan tells his story:

By his count, before his 18th birthday, Tyquan had been unjustifiably stopped by the police more than 60 times. His hope in sharing his story is that this will be a bigger project to examine more closely the impact of the stop-and-frisk policy on actual human beings. 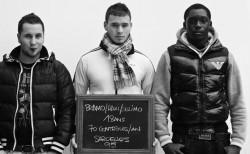