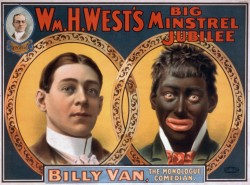 The “Un-Fair Campaign,” a public awareness campaign about racism, is generating some discussion.  In light of the recent video from BYU (see previous post), this campaign makes a lot of sense and is quite timely. The tag line is: “It’s hard to see racism when you’re white.”  The idea behind the campaign: if we recognize racism, we can stop it.

The focus of the campaign is very clearly on white people and this makes sense given the demographics of the region where the campaign is posting billboards.  The Twin Ports (Duluth, MN and Superior, WI) is a predominantly white community (89%).

The campaign is the work of several organizations committed to racial justice in the Twin Ports area, and grows out of a recent Knight Foundation report, called  Soul of the Community. In a three-year study detailed in the report, researchers found that people in this region were less likely to say that it’s a good place for racial and ethnic minorities, immigrants, than those in comparable communities elsewhere. Based on these findings, anti-racist activists in the area are trying to change things through the “Un-Fair Campaign.”  Here’s a brief description from the campaign’s website:

People of color experience incidents of racism every day, and they have long asked “when will white people in our community stand up and speak out about racism?”  This campaign is part of a response to that question.  Racial justice will never be achieved until we as white people address white privilege and work to change it.

The insight that “it’s hard to see racism when you’re white,” has been a central message here at this blog for some time, so perhaps not a new or controversial idea for regular readers here.

But the campaign (which just launched January 24) has already generated some heated backlash from whites who are not too keen on the ideas of having their whiteness pointed out to them, much less learning to notice white privilege or acknowledge racism.

The (white) mayor of Duluth has received death threats because of the campaign, and according to one account (h/t Lisa Albrecht, Assoc Prof, U of MN, member of leadership team of SURJ), other activists involved in the campaign are enduring a daily barrage of threatening emails and phone messages suggesting she should leave town, be raped because she ‘hates white people.’  And, of course, the campaign is getting a lot of play on the usual white supremacist sites.

The question the campaign – and the white backlash against – raises a perennial one for those interested in racial justice: how do you get white people to address white privilege and work against it?  The Un-Fair Campaign is an innovative approach to this persistent dilemma. The next challenge will be how to use the backlash to further the cause of racial justice.