Today, we mark the national holiday in honor of Martin Luther King, Jr. The memorial is the first to honor an African American on the National Mall and its adjoining memorial parks and is the result of more than two decades of planning, fund-raising and construction. The efforts began early on by Alpha Phi Alpha fraternity (King had been an active member). It was dedicated in October,2011, making today the first time that we’ve celebrated the holiday with a national monument in King’s honor.

Critics of the memorial, such as this one writing at The Economist, object to the memorial on both aesthetic and political grounds, calling it a ‘blockheaded’ design that is merely state-sponsored ‘propaganda,’ not in keeping with the values of equality that King championed. (One suspects that this critique is rooted as much in xenophobia about the Chinese sculptor and imported granite as it is in the objection to honoring King, but I digress.)

I couldn’t disagree more. I think the King memorial matters for our national conversation about race. 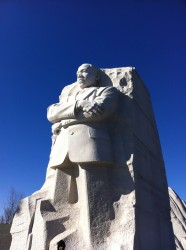 On a recent visit to the memorial, I was struck by conversations happening all around me about civil rights, about Dr. King’s legacy, about racial equality and justice. (There’s a great art / ethnographic project to be done here, setting up audio recorders to grab snippets of conversations heard around the memorial.)

Along with individual kids with their moms or dads, there were also small and large groups of students with teachers and guides, talking about the quotes by Dr. King etched in stone along the wall behind the large statue, using the monument as a way to teach about civil rights.

Given the monument’s significance as a place for enabling the ‘teachable moment,’ it’s also important to get it right.

One of the inscriptions on the monument reads “I was a drum major for justice, peace, and righteousness.” The problem? King never said those words, at least, not exactly. The actual quote comes from this sermon about a eulogy someone might give at his funeral, and it goes like this:

As Maya Angelou notes the shortened, paraphrased text misleads:  “The quote makes Dr. Martin Luther King look like an arrogant twit. He was anything but that. He was far too profound a man for that four-letter word to apply. He had no arrogance at all. He had a humility that comes from deep inside. The ‘if’ clause that is left out is salient. Leaving it out changes the meaning completely.”

Secretary of the Interior Salazar has issued a statement saying that the quote will be corrected.

Perhaps most striking moment for me on my visit  was the scene inside the gift store near the monument. There are no t-shirts or mugs or bobble-head dolls inside, only books and DVDs about the civil rights movement and Dr. King, many of these children’s books. Because the memorial is part of the National Park Service, the bookstore is staffed by Park Rangers.

And, while I was there, you could hear the voice of a Park Ranger reading a children’s book about the civil rights movement to a group of school children sitting on the floor in a circle.

That’s why the monument is important. Attacking Dr. King and his legacy is a key strategy of opponents of civil rights.   It’s an object that officially recognizes King’s legacy and contribution to civil rights in the U.S., and it opens up a space for having a conversation about what the legacy means and how it’s relevant today.

And that, I think is priceless.