From casual to pandering to deadly, there have been several disturbing reports about anti-Asian American racism in the news. In the more casual forms of racism, it seems that the whole using someone’s name as a way to retrieve an order at fast food places has gone horribly awry. About a month ago a Chick-Fil-A cashier at a store in Irvine, California assigned racist names to two customers and even typed them into the printed receipts (images here). And, just in the past few days, a woman went into a Papa John’s pizza chain in New York City and got called a racist name on her receipt (see that receipt here). Here’s an idea – maybe we could just go back to the “we’ll call your number when your order is ready?” system.

AngryAsianGrrlMN sums this up well when she writes:

This is the kind of casual racism that isn’t talked about, but that Asian people deal with on a regular basis.  We are the invisible minority, and we rarely get the kind of attention that other minorities do.

I’ll just state the obvious here and point out that these incidents didn’t happen in the distant past or some rural backwater, but in supposedly tolerant, cosmopolitan urban areas in the present, putatively post-racial era.

The pandering form of anti-Asian American racism is coming through, not surprisingly, the presidential campaign. John Huntsman, Republican candidate and former Ambassador to China, is fluent in Mandarin and, rather remarkably, spoke Chinese during the Republican presidential debate recently.  Huntsman and his wife have also adopted children from China and India.  All this “foreign-ness” has proven too tempting for some of his political opponents who are using these facts to pander to peoples’ racism and xenophobia.  As AngryAsianMan notes:

“It’s an election year, so you know what time it is. Racist campaign ads! This latest gem is from someone claiming to be a Ron Paul supporter, attacking Republican presidential candidate Jon Huntsman for his “un-American” values. … Here we go with another round of equating China with all things evil. Complete with an extra Oriental soundtrack — never has Mandarin made to sound so sinister. [This video] is one of the most unabashedly racist attack ads we’ve seen in a while.

The ad asks whether Huntsman’s values are “American” values or Chinese?  And, then rather sinisterly photoshops Huntsman into a portrait of Chinese leader Mao Zedong while thoroughly mixing the fear-mongering metaphors and comparing him to the “Manchurian Candidate.” This kind of strategy is what some people refer to as “dog whistle racism,” in other words, political campaigning  that uses coded words and themes that appeal to conscious or unconscious racist concepts and frames. For example, the terms ‘welfare queen,’ ’states’ rights,’ ‘Islamic terrorist,’ ‘uppity,’ and ‘illegal alien’ all activate racist concepts that already exist within a broader white racial frame.

Among the most disturbing news are the details that are emerging surrounding the death of Private Danny Chen in October, 2011. Chen, 19, grew up in New York City’s Chinatown, and is thought to have committed suicide in Afghanistan after enduring racial taunts and bullying (although some now question whether it was suicide at all). A group of his superiors allegedly tormented Chen on an almost daily basis over the course of about six weeks in Afghanistan last fall. They singled him out, their only Chinese-American soldier, and spit racial slurs at him: “gook,” “chink,” “dragon lady.” They forced him to do sprints while carrying a sandbag. They ordered him to crawl along gravel-covered ground while they flung rocks at him. And one day, when his unit was assembling a tent, he was forced to wear a green hard-hat and shout out instructions to his fellow soldiers in Chinese.ethnic slurs. At other times, they forced him to do push-ups or hang upside down with his mouth full of water. 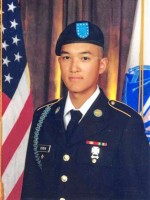 New York Magazine has an extensive piece about Chen’s experience, including his letters home from the military.  Here’s some of what he wrote to his parents:

“Everyone knows me because I just noticed, I’m the only chinese guy in the platoon,” he wrote home. His fellow recruits called him Chen Chen, Jackie Chan, and Ling Ling. But, he added, “Don’t worry, no one picks on me … I’m the skinniest guy and weigh the least here but … people respect me for not quitting.”

Four weeks later, the Asian jokes hadn’t stopped. “They ask if I’m from China like a few times day,” he wrote. “They also call out my name (chen) in a goat like voice sometimes for no reason. No idea how it started but now it’s just best to ignore it. I still respond though to amuse them. People crack jokes about Chinese people all the time, I’m running out of jokes to come back at them.”

The eight men later charged in connection with his death are all white and range in age from 24 to 35; they include one lieutenant, two staff sergeants, three sergeants, and two specialists. Danny’s parents, of course, are inconsolable at the loss of their only son.