The terrible news, as you’ve no doubt heard by now, is that there were two terrorist attacks in Norway – one at the capital of Oslo and another, more deadly attack, just outside the city at a camp for children.  Reports are that the death toll is around 90 people killed, many of them children, and scores were seriously wounded.  All those numbers may yet rise.  The shooter is alive and in custody.  He has been identified as a 32-year-old Norwegian farmer, Anders Behring Breivik (picture below via MSNBC from his Facebook page).  Racism seems to be implicated in this story in two, very telling, ways: Breivik’s views and the initial news reports about the terror strikes. 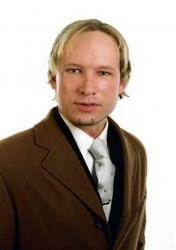 Anti-Immigrant, Anti-Muslim Views. According to Norwegian journalist Liss Goril Anda, writing for the BBC, Breivik had posted “racist, extremist right-wing comments along with fellow anti-Muslims” on right-wing websties. On his Facebook profile, he identified his political views as “Christian, conservative.”  However, Breivik didn’t belong to any known factions in Norway’s small and splintered extreme right movement.  Goril Anda writes that the Breivik’s online postings represent, “with varying degrees of extremism, a section of the Norwegian population which feels that the country’s immigration policies are too lax.” Goril Anda goes on to speculate, “Norway might now be forced to deal head-on with this undercurrent of nationalism and anti-immigration sentiments.”  The Mail refers to him as “an extremist who hated Muslims.”

According to another report, Breivik was recently posting online that politics today was not about socialism vs. capitalism but nationalism vs. internationalism. He argued on a Swedish news website that the media were not critical enough about Islam and claimed that Geert Wilders’ Party for Freedom in the Netherlands was the only “true” party of conservatives.  (Wilders said in a statement, “I despise everything he stands for and everything he did.”)

Breivik recommended other sites associated with the so-called counter-jihad movement, notably Jihad Watch, Gates of Vienna and the Brussels Journal. In December 2009 he wrote that he was working full time to promote the ideas of Islamophobes like Robert Spencer and Bat Ye’or.

He also wrote of his contacts with the English Defence League (EDL) and Stop Islamisation of Europe and claimed to have given them advice on strategy. He attached importance to building “a Norwegian version” of the EDL to fight against anti-fascists and anti-racists.

Updated Sunday, 8:26amET: And, of course, the racism in his selection of victims:  “Many of the victims in Friday’s shooting were the children of immigrants from Africa and Asia…” according to New York Times (via @Alondra).

Shameful Journalism. Shiva Balaghi writing at Jadaliyya has an excellent piece detailing all the major news outlets that first reported this story as a case of “Muslim terrorists” and/or “jihadi groups,” supposedly “angered at the war in Afghanistan,” including: the New York Times, The Financial Times, and PBS.  Perhaps most revealing is her account of Judy Woodruff on PBS’ Newshour, Balaghi writes:

Judy Woodruff’s interview with a Norwegian journalist that aired on PBS’s Newshour followed a similar scenario. We did learn that “a thirty-two-year old white Norwegian guy [sic]” had been arrested for presumably having carried out the bombings and the shootings. But no information was provided on the attacker’s motivations or political affiliation; Woodruff simply did not ask those questions. Who forms the neo-Nazi movement in Norway? [emphasis added]

Benjamin Doherty writing at The Electric Intifada has this more detailed account of how a supposed “expert” on terrorism set media speculation on Muslims following the attacks:

A terror group, Ansar al-Jihad al-Alami, or the Helpers of the Global Jihad, issued a statement claiming responsibility for the attack, according to Will McCants, a terrorism analyst at C.N.A., a research institute that studies terrorism.

In later editions, the story was revised to read:

Initial reports focused on the possibility of Islamic militants, in particular Ansar al-Jihad al-Alami, or Helpers of the Global Jihad, cited by some analysts as claiming responsibility for the attacks. American officials said the group was previously unknown and might not even exist.

The source was Will McCants, adjunct faculty at Johns Hopkins University, and Doherty does an effective job in tracking down McCants’ sketchy sources on this story.   Even after McCants posted that his information was flawed (and the claim for responsibility had been retracted), major news outlets like the BBC, the New York Times, The Guardian, The Washington Post were still promoting information originally sourced from him.

The news spread quickly and amplified the association in many people’s mind between “terrorism” and “Muslim.” The problem, of course, is that it wasn’t true, even as these mainstream news outlets kept reporting that it was.

White-Blindness & Terrorism. Taken together, these paint a broader picture of the ways we do not see race when it is white, and the ways we do not acknowledge racism in our thinking about terrorism and the ill-conceived “war on terror.”  In a way, we have white-blindess, like snow blindness, when it comes to terrorism.  A white, Christian, conservative, anti-Muslim, anti-immigrant terrorist takes up arms and the mainstream media is caught short trying to report on the story because of their own white-blindness, their inability to see, indeed even imagine, whiteness as a race. It’s likely now that these same news outlets will start referring to him as a “lone wolf,” increasingly a phrase that is used only to describe white terrorists.  The “lone wolf” designation further distances Breivik’s politics from his actions.  The rhetoric of “terrorism” and “the war on terrorism” is language that is steeped in connotations of a dangerous, Dark Other, despite the evidence to the contrary.  Like the attack by Timothy McVeigh on Oklahoma City that killed 168 people, the Norway attacks demonstrate that white men can be terrorists.  It’s only white-blindness that keeps us from seeing that.