The Pew Hispanic Center has a very interesting new report on the Latino vote in 2010. Their chart shows that the number who have voted in midterm elections has steadily increased, to 6.6 million in the most recent election. This was in 2010 some 6.9 percent of all voters, up 1.1 percent since the last midterm election. 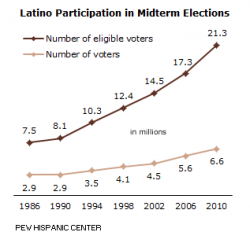 As their summary puts it

Rapid population growth has helped fuel Latinos’ increasing electoral participation. According to the Census Bureau, 50.5 million Hispanics were counted by the 2010 Census, up from 35.3 million in 2000. Over the same decade, the number of Latino eligible voters—adults who are U.S. citizens—also increased, from 13.2 million in 2000 to 21.3 million in 2010.

Yet, there is still the reality of lower participation than their percentage of the population, for rather obvious reasons:

In 2010, 16.3% of the nation’s population was Latino, but only 10.1% of eligible voters and fewer than 7% of voters were Latino. This gap is driven by two demographic factors—youth and non-citizenship.

The Pew Hispanic Center has been doing some useful research reports for both researchers and teachers working on Latino issues, including those researching the political and other impacts of this growing Latino vote. I have seen very little, speculative or data-driven, research examining the likely political and other impact of this growing voter group over the next few decades. It certainly played a significant role in the election of President Obama in 2008, and likely will again in 2012. What is you take on these data?