Today, Judge Robert Perry sentenced former BART cop Johannes Mehserle to two years in prison, with credit for time-served, in the killing of Oscar Grant.  The killing was already ruled involuntary manslaughter (no surprise, given that there were no African Americans on the jury) but Mehserle could have received as much as 14 years for shooting Grant who was laying face down on the train platform with his hands cuffed behind his back at the time. 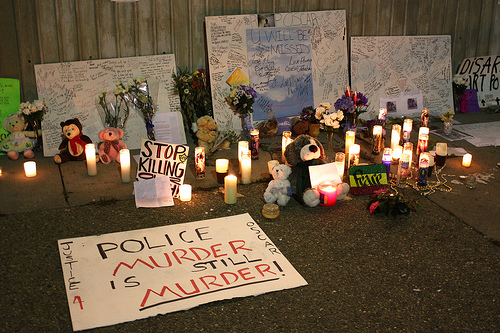 It’s unlikely that there will ever be anything approaching justice for the Grant family in this case.  They’ve lost a son, a brother, a father, a partner.  There is no justice in the fact that right now – not fifty or sixty years ago – that the shooting an unarmed black man by a white cop results in a more lenient sentence than a case of dog-fighting case.  Now, don’t get it twisted, I think cruelty to animals is wrong, but I don’t think that it makes any sense that Michael Vick should get a longer prison sentence than Johannes Mehserle (h/t to @MrDaveyD for making this point on Twitter), but I’m not surprised.   We’re living in the new Jim Crow, after all.

The call for a harsher sentence in the particular case of Mehserle, and the grave injustice to Oscar Grant and his family, should not distract us from addressing the larger issue of the systemic racism which perpetuates this injustice on a grand scale.