Two weeks ago, the Mo Ibrahim Foundation released its 3rd index of governance ranking all African countries on four dimensions: safety and rule of law; human development; participation and human rights; and sustainable economic development. The index is funded and developed by a Sudanese-born British communications mogul. Mo Ibrahim has an interest in encouraging good governance in Africa and has also established the prize for achievement in African leadership. When I reviewed this year’s release, I was not so surprised at countries such as Sudan (47 out of 53 countries in Africa), the Democratic Republic of Congo (51) and Somalia (53).

In my review of the indicators used for the index, I wondered about the usefulness of the index as a proxy for tracking inter-communal violence generally. I searched for an indicator on social distance – the metaphorical and geographic indicator of ethnic relations and inter-communal violence. I also wondered about the impact of such an index. Do African leaders care about how their leadership is ranked on governance? Do they make policy decisions based on their ranking?

Sudan and DR Congo are two of the three largest countries in Africa; Somalia, of course, is experiencing the longest civil war in any country; that civil war has been raging for over two decades now – with no end in sight as African Union troops, with funding from the U.S. try to keep the peace and prevent the Islamist extremists from taking over the country. The Islamist extremists have taken responsibility for bombings in Uganda in July 2010 that killed 74 people, including an American. These extremists cannot allow any other world view as they lay to waste the future of the youth. There are reports of the same group sowing discontent among the immigrant Somali population in Nairobi, Kenya.

In DR Congo, over 5 million have died in the civil war; this has been a brutal war that is still raging in the heartland of Africa; where marauding soldiers rape and kill at will. The extra judicial killings in Sudan are estimated at over 300,000 in the Darfur region. In about 3 months, the Sudanese in the South will vote on whether to secede to form a separate country. The social distance between the groups there will take some time to bridge. (See here). 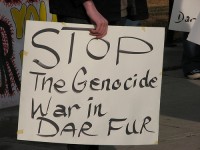 Perhaps what we need is an index based on the per capita human suffering due to these brutal ethnic or religious conflicts; the index would be a predictive one based not on secondary data, but on surveys of sampled populations. The index would have a positive correlation with the indicator on social distance based on group identity. Perhaps we could use this model to explain the haunting case of Somalia – Somalia basically has one ethnic group, with several clans; it has one main religion, Islam. And yet, the country has not been governable for the past 20 years. It has managed to destroy the lives of generations its people. 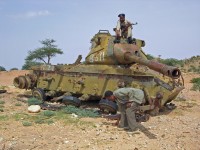