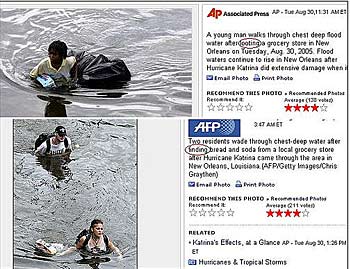 Although there’s been some good journalism and good blogging about the Katrina anniversary, I haven’t seen much in the way of a review of the research on the subject.    So, here’s my offering.  This is just some of what I’ve run across, organized very broadly by discipline:

Sociology – The sociology on Hurricane Katrina and its aftermath highlights the intersection of race, gender and class.  Sociologists contend that the inequality that existed before prior to the disaster, became intensified and deepened in the aftermath of the storm.   Further, sociologists point out the way that this rupture in the usual “colorblind” ethos that prevails in the U.S. served to strengthen whites’ racial apathy toward blacks, especially those who are economically impoverished.

Environmental / Urban Studies – Urban and environmental studies examine the ways that the built environment shaped the disaster and the ways that environmental hazards are concentrated in minority communities.  In addition, those who look at the disaster through an urban studies lens explore the process whereby local economic elites are seeking to make an opportunity of the destruction by monopolizing the planning process and rebuilding the cityscape in a fashion more amenable to the accumulation of capital.

Public Health -Psychology-Mental Health – Psychologists along with public health and mental health professionals examine the impact the disaster had on individual mental health.  One study (Galea, et al., 2008) found that women, and those who had suffered significant financial loss following the disaster, were more likely than men or those who didn’t suffer significant financial loss, to experience PTSD after the storm.

Media / Communications – Communications and media scholars focus attention on the ways that the mainstream media framed the disaster for television audiences and newspaper readers.   Study after study demonstrates that, as Tierney et al. demonstrate, “metaphors matter.”   As the image above illustrates, race played an important role in the ways that the stories from the disaster were told.

Public Policy – Scholars and analysts that examine the racial impact of the disaster from a policy perspective tend to focus on the failure of governmental, corporate and private agencies to respond to the plight of New Orleans’ black community. Stivers makes a compelling case that racism – “The belief that members of a certain race are inherently inferior – less intelligent, less ambitious – has rationalized discriminatory treatment as fitting, proper, and without evil intent,” – significantly shaped the public policy response following Hurricane Katrina.  Five of the six areas classified as most heavily damaged were neighborhoods with 60-80% poverty, and the population was predominantly black.  Stivers notes how these two facts – racism and the disproportionate impact of the storm on black people – shaped public policy response to the storm, when she writes: “On the one hand, the bureaucrat’s job is to lighten the burden imposed by a capitalist economy that inevitably leaves some people at the bottom; on the other hand, American ideology relies on the belief that people who are at the bottom are there because of some character flaw or inherent inability.”

I’m sure there’s good research I’ve overlooked in this brief list.  If I’ve left out some of your research, or some that you know of and use, please add a comment and I’ll update the original post.