Racism is bad for your health, new evidence suggests.  We’ve written before about the link between racism and health.  Traditionally, scholars have conceptualized this in only one direction; that is, racism is bad for people of color.   African Americans, Latinos, Asian Americans who are the targets of racism are worse off than whites in terms of their health on a wide range of measures.   Some of this is about health disparities rooted in income inequality, but there’s a growing body of research that points to racism as a root cause for at least part of these differences.  Now, some new research suggests that racism may also be harmful for white people.

Elizabeth Page-Gould discusses some of this in a recent piece at Alternet:

In one study, Wendy Berry Mendes, Jim Blascovich, and their colleagues invited European-American men into the laboratory to engage in social interactions with African-American men or with men of the same race as themselves. The participants were hooked up to equipment that measured the responses of their autonomic nervous system while they played the game Boggle with their white or black partners.  When interacting with African-American partners, the white men tended to respond as to a physiological threat, marked by diminished blood pumped through the heart and constriction of the circulatory system. However, European Americans who had positive experiences with African Americans in the past responded as though the game posed a challenge—increased blood pumped by the heart and dilation of the circulatory system.

This doesn’t seem to be an isolated finding.  Page-Gould conducted similar research and found that those who scored high on a measure of prejudice had increases in cortisol during the friendly interaction with a cross-race partner, but produced less cortisol when interacting with a same-race partner.  Those who were low in prejudice were not stressed during either cross-race or same-race interactions. In other words, prejudiced individuals perceived partners of a different race as a physical threat, even though they were in a safe laboratory setting and engaging in a task that was structured to build closeness between the participant pairs.

While this research focuses on individual level prejudice, other research points to the harmful effects of structural, institutional racism for whites’ health.

The good folks at Sociological Images caught some new research by Philip Cohen of Family Inequality which demonstrates one of the many hidden costs of racism.  In Cohen’s recent paper published in the Journal of the American Society of Nephrology, he illustrates that in any given neighborhood in addition to the traditional way we’ve understood racism and health – that black people are always less likely to get access to a kidney specialist before their kidneys fail – there’s also another trend that’s bad news for white folks.  White people living in a neighborhood with a higher percentage of blacks are less likely than whites in a predominantly white neighborhood to see a specialist.  In other words, whites also suffer from the institutional racism that structures residential segregation. 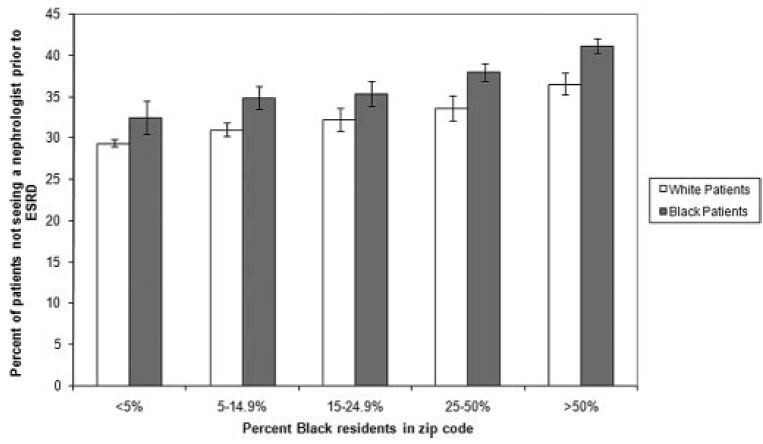 I think it’s important to point out the ways that racism also costs whites as a strategy for dismantling this American version of apartheid that continues here.  Both of the pieces that report on this research frame the research in terms that are meant to appeal to whites’ self-interest.   Page-Gould (Alternet) writes:

“In the urban metropolises of the United States and Canada, it is almost impossible to avoid talking to someone of another race. So imagine the toll it would take if every time you did, your body responded with an acute stress reaction: You experience a surge in stress hormones, and your heart pumps harder while your blood vessels constrict, inhibiting the flow of blood to your limbs and brain.These types of bodily reactions are helpful in truly dangerous situations, but a number of recent studies have found that racially prejudiced people experience them even during benign social interactions with people of different races. This means that just navigating the supermarket, coffee shop, or modern workplace can be stressful for them. And if the racist person then has to go through this every single day, the repeated stress can become a chronic problem, which places them at heightened risk for disease in later life.   Harboring prejudice, it seems, may be bad for your health.”

The intended audience member here seems to be the prejudiced white reader who, unable to avoid encounters with people of color, should learn to react differently or risk harming their health.   As powerful as the imperative to health is (especially among whites), I doubt this is going to shift anyone’s approach to cross-racial interactions.    As an urban dweller in the U.S. in a reasonably diverse city, I can attest to the ways that people remain racial segregated and can quite easily never interact with someone of another race.

The persistence of racial segregation in housing is also part of the problem I have with the analysis of whites’ self-interest in the kidney failure study.  It seems just as likely – maybe more – that whites would read that research by Cohen and conclude, “ah, note to self: do not live in predominantly black neighborhood.”  Lisa, writing at SocImages, is more pointed in her framing of the research:

Yeah, they should.  We should.   I’m just skeptical that self-interest will triumph where an entire civil rights movement based on moral reasoning has failed.