Today marks the 50th anniversary of the publication of the novel, “To Kill a Mockingbird,” by Harper Lee.   The novel tells the story of Tom Robinson, a black man who is falsely accused of raping a white woman.  What makes the story so engaging is that it is told from the perspective of a child – Jean Louise Finch, or “Scout,” as she’s known.   The story is set in the depression-era fictional town of Maycomb, Alabama was based on Lee’s actual hometown of Monroeville, Alabama.

I read this novel as a kid and it had a profound effect on me.  In fact, for years I had two dogs named for characters in the book:  “Scout” and “Boo.”   And, when I once toyed with the idea of collecting data on white supremacist groups by signing up for their mailing lists (pre-Internet days, and an idea I later abandoned), I used the alias “Jean Louise Finch.” 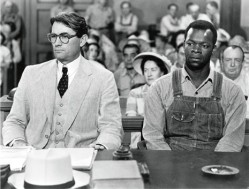 The key figure in the novel is Atticus Finch, often heralded as a kind of white, southern civil rights hero,  but that view has recently been called into question.

What’s your memory of this book? Have you  ever read it? Or, re-read it recently.  Do you think that Atticus Finch was a hero?  Or, was he as much a part of the problem with the Jim Crow south as the lynch mob?

Tags: To Kill a Mockingbird