Yesterday, The New York Times’ City Room Blog published a piece about the changing demographics of Manhattan which is obvious to anyone who lives here:  Manhattan is getting whiter.   In fact, Manhattan is whiter now than it’s been since the 1970s.   According to the report,

For the first time since the 1970s, a majority of Manhattan’s population is non-Hispanic white, according to an analysis of census estimates. The white share of the population, which had dipped to about 40 percent as recently as the 1990s, climbed to nearly 51 percent last year. The rest of the borough’s residents were 24 percent Hispanic, 14 percent black and 11 percent Asian.

Part of this demographic trend is not about urban-living per se, but about the cost-of-living in Manhattan.  As Scott Stringer, Manhattan borough president, notes “The entrance fee to live here is a million-dollar condo.”  That’s not exactly true, but it feels true.  I live in Manhattan and I’ve come to terms with the fact that I will always be a renter and never own a home or apartment.   Stringer is more accurate when he says, in the rest of that quote, “It’s magnificent and a great place to live, but its becoming more challenging for two teachers, or a nurse.”   Perhaps not surprisingly, Manhattan lost residents in the past year after a decade-long trend of population gains. 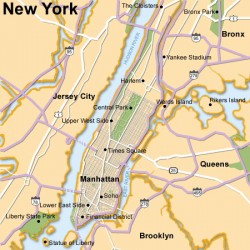 The bigger picture here is that there’s another island which is also part of the New York City:  Rikers Island.    Rikers Island is the city’s largest jail facility, and it’s actually a complex of some 14 different jails.  (Jails, different than prisons, hold people who are being held before sentencing and those with sentences of less than one year.)   The island is a small land mass in the East River just between Queens and the Bronx.    On a given day, there are approximately 14,000 people incarcerated there, and another 11,500 or so who work there as correctional officers or civilian staff.

Rikers Island is, in many ways, experiencing the mirror opposite trend of Manhattan.    Ninety-five percent of the inmates in New York City jails are African-American or Latino, while these two groups make up only about half the city’s population.  This, too, is obvious to anyone that’s ever been to Rikers Island.  I spent about five years doing health-related research there and know this fact well.

What does this tale of two islands tell us about structural racism?   In very broad terms, it illustrates the ways that racism and racial inequality can operate quite effectively without the kind of overt racism of the “Yup, I’m a racist” t-shirt-wearers.   One tale, of Manhattan, is a tale of real estate.  The other tale, of Rikers, is a tale of the New Jim Crow, New York-style.

Like so much in Manhattan, the driving story around the rise in white people here is about real estate.    The real estate trend that most often gets mentioned in this context is the gentrification in Harlem, East Harlem and Washington Heights, neighborhoods that have traditionally been home to large African-American and Latino populations. Gentrification is the process of newer, more expensive housing being built in neighborhoods; the newer, more expensive housing displaces current residents who can’t afford to live there.  There’s nothing inherently racial about gentrification, but when those who are displaced are Black and Latino and those who are gentrifying are white, it works out that way.

What drives the gentrification of these once predominantly Black and Latino neighborhoods is a dramatic rise in the construction of tens of thousands of “luxury apartments” all over the city.  Once apartments are designated “luxury,” they are not subject to the otherwise fairly strict rent-regulation laws in New York City, and they are priced well above what’s affordable for working and middle-class New Yorkers, and are completely out of the range of poor families.   The majority of new housing being built in Manhattan in the past 10 years has been “luxury,” while the number of “rent-regulated” (or, even the more expensive “rent stabilized”) apartments has dramatically decreased.

What the City Room Blog refers to, rather benignly, as the  “dispersal of black and Hispanic Manhattanites,” is more than simply gentrification and being priced out of the housing market.  This is also the story of policies that are part of what Michelle Alexander has termed, The New Jim Crow.
Take a look at the policies which have created Rikers Island and you will see what the New Jim Crow looks like in New York City.   In contrast to “million-dollar condos,” for white, wealthy New Yorkers, those who are economically disadvantaged and Black or Latino live in what are referred to as “million dollar blocks.” That is, those who are incarcerated at Rikers come from the same few blocks within New York City.  These blocks are dubbed “million dollar blocks” because the criminal justice system has become the predominant institution in these neighborhoods and funnels, literally, millions of dollars into them to control these predominantly Black and Latino neighborhoods.   In these neighborhoods, simply standing on a street corner will put you at risk for being arrested, regardless of what you’re doing.  The NYPD’s “sweeps” in these neighborhoods – where the police literally “sweep” everyone off of particular corners and detain them – is standard policy in New York and has been since the Guiliani era (Bloomberg has continued and stepped up these policies).

You don’t have to be committing a crime to be targeted by NYPD for “stop and frisk.”   Since 2004, the NYPD has stopped and interrogated people nearly 3 million times, more than 80 percent were Black or Latino. The names and addresses of those stopped have been entered into the department’s database, regardless of whether the person had done anything wrong. Last year, NYPD officers stopped and questioned or frisked more than 575,000 people, the most ever. Nearly nine out of 10 of those stopped and questioned by police last year were neither arrested nor issued a summons.

Once in the system, either with a record – even for a minor offense – or, just because you were once “stopped and frisked,” means that the NYPD regards you as a potential suspect, and, you are even more likely to end up spending at least some time at Rikers Island, particularly if you are young Black or Latino man.    Michelle Alexander argues in The New Jim Crow: Mass Incarceration in the Age of Colorblindness, that we have not ended racial caste in America: we have simply redesigned it. Her work shows that by targeting black men and decimating communities of color, the U.S. criminal justice system functions as a contemporary system of racial control, even as it formally adheres to the principle of color blindness.

That process works here in New York City, where the rhetoric of color blindness prevails while the island of Manhattan gets whiter, and Rikers Island remains Black and Latino.