In many ways, the story of racial injustice and the death penalty in the U.S. can be summarized in the story of Troy Anthony Davis.

On the night of August 19, 1989, an off-duty police officer, Mark MacPhail, was shot and killed. The events leading to his death are quite unclear.  Eyewitness accounts and testimonies have been altered and recanted. However, the story was reported as follows: Standing outside a Burger King in Savannah, Georgia, a black man, Sylvester “Redd” Coles was seen harassing a homeless man for beer. Coles continued to harass the homeless man and followed the man to a nearby parking lot. Several bystanders, including Troy Anthony Davis, followed the scuffle. Coles was overheard threatening to shoot the homeless man and seen hitting him over the head with a gun. Hearing the homeless man’s cries for help, MacPhail responded to the scene. While responding to the fight, a .38 caliber revolver set off ultimately killing officer MacPhail.

At first, witnesses had a hard time identifying the shooter as the scene was not well lit, and two men present, Coles and Davis, appeared similar in appearance to many.  Soon after the shooting, Coles confronted the police to tell his version of events and implicate Davis. Unaware that he was accused of a crime, Davis went to Atlanta in search of job opportunities. Davis’ trip appeared to police like an attempt to flee the scene of the crime and an admission of his guilt. 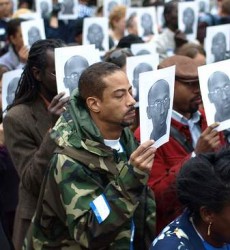 During the day on August 19, 1989, another shooting occurred at a party where both Coles and Davis were present. At this scene, Coles was overheard arguing with the victim. Shell casings from both scenes revealed that the same firearm had been used in both shootings. Despite the mounting evidence against Coles, his belongings were never searched, and he was never questioned as a suspect in either crime. Davis was deemed guilty and put on trial. There was never an investigation into his part in the crime, and he was never questioned as a suspect.

Here is where things get even messier…

The case of Troy Anthony Davis offers insight into the kind of injustices that a person of color faces in the criminal justice system. To learn more about upcoming proceedings in the Davis case, and to take action on his behalf, please visit:

With the mounting evidence of Davis’ innocence, why does he still sit on death row?  We ask several questions for readers here: