As I waited in the bus for the rest of our riders to come trickling in, two middle-aged,  men, Ricardo and José,  slowly walked in, clearly fatigued after the pre-march rally, immigrant rights march, four-hour rally and long hike to the stadium where hundreds of buses were parked. As they stumbled in  José  asked “and now what do we tell Obama”? “Nothing more for now”, responded an exhausted Ricardo as he plopped on his bus seat. “We have already spoken with our bodies”.

Four years ago when I started researching the immigrant rights movement in Chicago, a march of this magnitude in DC was barely imaginable.  I was one of a group of scholars at the University of Illinois at Chicago who were closely studying the megamarches in Chicago while observing from afar the multitude of marches in cities large and small throughout the country.  Spurred by  by a loose coalition of organizations,  churches, religious groups and unions in light of the collective fear  of a bill that would have criminalized immigrants and those who supported them, the megamarches were a sign of Latino political potential, albeit ones that relied primarily on the strengths of each home base. The kind of national organization and coordination of grassroots efforts that a megamarch on DC would have required still seemed quite distant. Moreover, after an immigration reform bill introduced in the Senate failed in the summer of 2007, some feared that perhaps the Latino muscle shown would be hard to revive. The marches continued, but dwindled significantly in numbers in 2008 and 2009.

However, interpreting this decline in the number of marchers as a decline of the immigrant rights movement would be a serious mistake.  Post-2006 activism and advocacy continued in many forms. Throughout the country new community organizations proliferated in many major cities but also were created for the first time in small cities, suburbs and villages that had great immigrant demographic growth but low preexisting levels of organization.  For example, last year, in the Chicago metro area, PASO,  the West Suburban Action project, was founded, bringing  together two large churches and several suburbs to organize for immigrant rights among other issues.  Barely four months ago,  a group of undocumented youth created the Immigrant Youth Justice League (IYJL) , born out of an arduous and ultimately successful campaign to prevent the deportation of a local college student. Eleven days before the DC march, the IYJL staged its first major action, a march and rally. Stating that they were undocumented and unafraid,  eight undocumented youth publicly came out of the shadows, telling their painful stories of what it means to grow up undocumented in the US, emphasizing their need to speak for themselves about their lack of freedom and opportunity in the only country they consider their home.

To many, the very fact of a census taker asking “what race are you?” evokes a racist past that we’d like to move beyond.  Today in our week-long series on “Race and the U.S. Census,” I’ll consider some of the recent arguments about whether the census use of racial categories is, in itself, a form of racism. 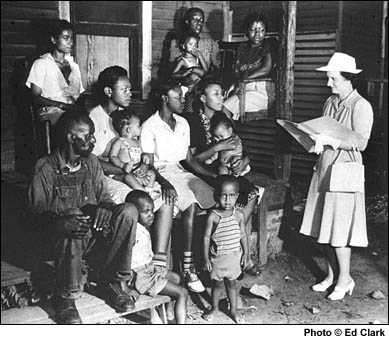 (Photo by Ed Clark from here.)

Dr. Kelly, writing at CNN’s iReport website, argues strongly for the case that the categories themselves reinforce a greater valuation of “white” over “black” and that the whole notion of referring to people as colors is wrong-headed:

Meanwhile, some scholars and journalists have noted that the use of the word “negro” on the census form is offensive to some and should not be used in the 2010 count.   However, sociologist  Dr. L’Heureux Dumi Lewis has a different take:

I am all for rallying around a cause. I’m just not sure I can meet ya’ll down at the Census offices for a protest over Negro. Focus groups, lettering writing campaigns, and write ins suggest some of our older brothers and sisters still support the term. Let’s focus energy in creating greater political clout, not appropriate nomenclature.

Lewis goes on to point out three issues that are worth paying attention to, in his view, around the census (the counting of prisoners, who gets counted as white, and undercounts), and we’ll get to those later in the series.

The fact is, many observers are wary of the census when it comes to race.   Jillian C. York writes at the Global Voices Online blog that:

This year, there has been controversy in the Arab-American community over the question of race, because “Arab” is not included. Arabs are supposed to check “White” as their race, or can write in “Arab” or their chosen ethnicity (e.g., Syrian, Saudi), though they will still be counted as officially white. Maytha at Kabobfest believes that this is dis-empowering to Arab Americans…

The kind of push-back by Arab Americans that York notes is what has happened in the past with the census categories.  Part of the reason that the census categories change each ten years is that activists demand inclusion in the census.    And, every ten years, there are complaints from groups that are undercounted or left out of the census completely.

So, the question becomes then are these categories themselves problematic?   Is it better to count and include racial categories however flawed, or not count race at all?  We’ll explore these issues, and more, in coming installments in the series.