March 1 marks “National Women of Color Day,” situated at the end of Black History Month and at the beginning of Women’s History Month.   Over the weekend, I attended the SexTech conference in San Francisco and heard a discussion by feminist sexual health educators that was interesting and flawed because it largely left out black women’s experience of sexual and reproductive health.  This confluence of events seemed like an opportune moment to address the controversy churning around race and abortion. The current discussion, which is highly politicized in the U.S. in ways that it’s not elsewhere, has been touched off by a new multimedia activist campaign, called “The Endangered Species Project.”

The campaign was launched in early February at a press conference by Georgia Right to Life and The Renaissance Foundation announcing a provocative billboard which proclaims “Black Children are an Endangered Species” and urges people to go to the site TooManyAborted.com (more about which below).  Here’s one of the billboards in the campaign (which reportedly costs $20,000 for approximately 65 signs around Georgia): 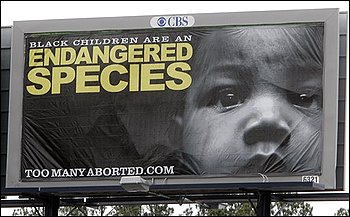 The main group behind the billboard campaign is the predominantly white organization, Georgia Right to Life (GRTL).  Prior to this campaign, the GRTL was probably best known in the region for its “Miss Right to Life” pageant.   With the new ‘endangered species project’ campaign, GRTL is partnering with a Ryan and Bethany Bomberger.   The very slick website for the campaign, says the effort is a “collaborative effort between The Radiance Foundation and Georgia’s Operation Outrage.” The three layers of identification here — “Too Many Aborted.com,” then The Radiance Foundation, and then Operation Outrage — work as a kind of Internet slight-of-hand.  The illusion of a multi-layered organizational structure disguises the fact there’s no staff here beyond the Bombergers.  Ryan Bomberger is a former ad exec, and wife Bethany is a former school teacher, and they live in Georgia with their three children.   Ryan Bomberger, who is biracial, has a compelling story about being the product of rape and the beneficiary of adoption, and this narrative frames much of the discussion in this multimedia campaign.  Bomberger wants more mothers of black and biracial children to consider adoption rather than abortion.

Perhaps more disturbing even than the slickly deceptive multimedia campaign is the corporate involvement of CBS.  According to RHRealityCheck, the billboards are the property of CBS Outdoors, a subsidiary of the multi-media CBS corporation.  This pro-life campaign comes very quickly on the heels of the CBS decision to air a Super Bowl ad earlier this month from Focus on the Family, the ultra-right conservative organization that seeks to limit the rights of women, LGBT folks, and people of color generally.  CBS simultaneously denied ad space to advertisers for condoms and organizations representing gay advertisers.  At this point, it’s not clear whether CBS is endorsing or underwriting the ads in any way, but it’s certainly a telling coincidence.

At the launch of the ‘endangered species project’ GRTL also announced that they would seek to pass House Bill 1155, legislation that would:

“make it a crime to ‘solicit a woman to have an abortion based on the race or sex of the unborn child.’ “

GRTL’s “endangered species” ad campaign is an incredibly sophisticated strategy for reaching out to black women about issues of reproduction because it trades on a rhetoric that evokes the long history of racist practices directed specifically at black women.   For example, forced sterilization of black women was so commonplace in parts of the deep south during the Jim Crow era that it was referred to as a “Mississippi Appendectomy.” It was routine for white doctors who perform these sterilizations on black women without their knowledge or consent, presumably “for their own good” and the “good of the larger society.”

It’s also true that black women, like women of other races, want to control their reproductive lives.  Usually what this means is deciding on when and how many children to have. For many African American women in Georgia (and around the U.S.), a lack of access to birth control, lack of education, and even a high rate of sexual violence make this kind of control difficult to achieve.   The fact is that a disproportionately high percentage of black women seek abortions, from the New York Times:

Data from the federal Centers for Disease Control and Prevention show that black women get almost 40 percent of the country’s abortions, even though blacks make up only 13 percent of the population. Nearly 40 percent of black pregnancies end in induced abortion, a rate far higher than for white or Hispanic women.

As the state’s largest anti-abortion group, GRTL has been trying to find ways to address the issue of abortion in the black community, but without much success until they began to reframe the issue as one of genocide.   GRTL also did a very savvy thing and hired an African American woman, Catherine Davis, to be its minority outreach coordinator.  Ms. Davis travels to black churches and colleges around the state, delivering the message that abortion is the primary tool in a decades-old conspiracy to kill off blacks.   Not surprisingly, given the genocidal practices in the U.S. against black and brown people over centuries, this is a message that has resonated with African American audiences.

“It’s a perfect storm. There’s an assumption that every time a girl is pregnant it’s because of voluntary activity, and it’s so not the case.”

SisterSong also notes that “the association between the born and unborn with endangered animals provides a disempowering and dehumanizing message to the Black community, which is completely unacceptable.” Other people, such as this blogger, have noted that the “endangered species” ad campaign sends an insidious message about African American women’s sexuality that:

African Americans are more promiscuous, practice unsafe sex, and because they obtain more abortions, are less responsible. This has many lasting effect across the country that further enables historical constructs and stereotypes surrounding race to flourish. (Such as the construct in which the African American Women are portrayed to be an out-of-control sexual being that always wants sex).

The billboards also imply that “black women somehow are perpetrators of a coordinated and intentional effort to ‘execute’ black babies is harmful, deplorable and counterproductive.” This assessment comes from SPARK, another reproductive justice organization that, along with SisterSong, is pushing back against the “endangered species” ad campaign and the proposed House Bill 1155.  SPARK released this statement in support of black women’s self-determination over their own reproductive lives:

“Black women know what is best for our lives, our families, and our communities and are capable of making these decisions without a coordinated assault by organizations that are not genuinely committed to addressing the host of social issues confronted by the black community. We strongly reject and denounce these billboards and the sponsoring organizations, Georgia Right to Life, the Radiance Foundation, and Operation Outrage for speaking about us, demonizing our decisions, and assuming they know what is best for our lives.”

While the Bombergers and other pro-life advocates like the GRTL say they want to encourage adoption because they care about black children, the reality is that adoption placements are heavily influenced by race and the racial preferences (if not outright racism) of adoptive parents.  According to one recent study,  both straight and gay adoptive parents in the U.S. exhibit racial biases when applying to adopt a child, consistently preferring non-African-American babies (pdf).  So the reality is that if more African American babies are given up for adoption, they will very likely languish in the foster care system rather than being adopted due to the racism of prospective adoptive parents.
The “Endangered Species Project” is yet another villification of black women (there are so many available), and a rather cynical effort to play upon some well-founded suspicions of black people.  If groups like GRTL really cared about black children they might better spend their time working to reduce or eliminate the racism which negatively affects birth outcomes for black mothers (pdf). Rather than the narrowly focused agenda of preventing black women from getting abortions, we need think differently about abortion, not as a “right to life” versus a choice, but as part of a broader reproductive justice agenda that places black women’s experience at the center.

Updated 3/1/10 @ 12:10pmET: A reader responded saying she was confused by the stance toward abortion in the original post.  The point here is not to re-hash “pro-life” vs. “pro-choice” arguments which are framed by a white feminist movement and the mainstream media, but rather, to put reproductive justice at the center of the analysis.  One way to do that is to begin my looking at women of color’s experience with reproduction, such as African American women’s lives.  For an excellent analysis from this perspective, I encourage readers to read Renee at Womanist Musings (also linked in the original post).  Miriam writing at Feministing has a good analysis of the bias in the NYTimes piece (which I linked to above) that also offers some insight into reproductive justice and women of color.

And, I was remiss in leaving out a call to action from the organization SPARK Reproductive Justice Now, mentioned in the original post, which has a campaign to urge CBS Outdoor to bring the billboards down. Click here to take action.