The Intelligence Report has a very interesting article on how and where children learn racist ideas, with a focus on children of white supremacists. The report quotes a number of scholars on this how and where issue:

“Overall, there’s not a lot of evidence that, at least in the long term, kids get their prejudice from their parents,” said Charles Stangor, who runs the Laboratory for the Study of Social Stereotyping and Prejudice at the University of Maryland. “I would call it more of a community effect than a parental effect. The community fosters tolerance or prejudice.”

What is this “community”? The article cites another researcher:

That community includes peers and other adults, such as teachers, coaches and clergy, said Frances Aboud, a psychology professor at McGill University in Montreal, Canada, who studies the development of racial prejudice in children. “There are so many other influences in a child’s life [besides parents], particularly once they start kindergarten.”

The account only mentions peers in passing, but research that Debi Van Ausdale did for 11 months in a multiracial daycare center showed clearly that children learn a great deal about racial matters from other children. That they form important peer groups and learn much from each other is a key finding of this study, yet these children’s groups still do not get enough attention in social science research on racial learning and systems of racial oppression. 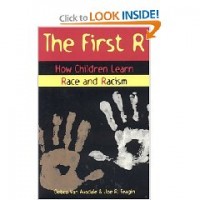 Children, as young as three years old, teach each other the basics of the white racial frame and the dominant racial hierarchy.

There is much else to the lives of children and racism that does not get enough attention. Teachers are quite important, and some research does focus on them and the curriculum.

Children of racial extremists may have to contend with other effects of their parents’ bigotry, Aboud said. “I think [they] probably become sensitive to that type of adult; other kids might not be aware that there’s that kind of extreme emotional hate toward people,” she said. “[Children of racial extremists] might have lived with more fear. They might have felt vulnerable themselves to that kind of hate: What if I cross my parents in some way — am I going to get that hate directed at me?”

This is yet another seriously under-researched area.