There is some fascinating research being done these days with mapping and the visual representation of data, some of it illustrates the reality of incarceration as the new form of Jim Crow segregation.

Currently, the U.S. has more than 2 million people incarcerated in jails and prisons. A disproportionate of these come from a handful of neighborhoods, and in many places the concentration of incarceration rates is so dense that some states are spending in excess of a million dollars a year to lock up the residents of single city blocks.  A lack of opportunity in the legitimate economic structure, combined with more opportunities in the unofficial economy, and the aggressive police state practices that Joe mentioned yesterday, fairly guarantees high reincarceration rates.   In fact, roughly forty percent of those who are released and reenter their communities do not stay more than three years before they are reincarcerated.   These “million dollar blocks” are almost exclusively also blocks where African American and Latino people live. 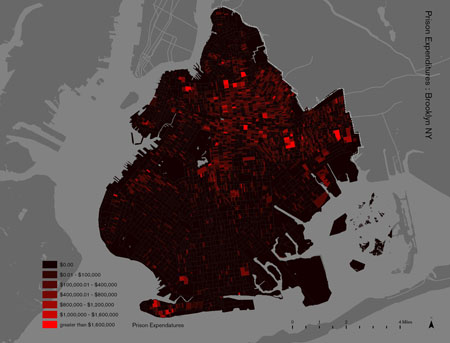 Blogger Julie Netherland notes the staggering public health costs of such policies, then poses the relevant question here: “how could we improve the health of these neighborhoods if we invested a million dollars into community development, jobs, or education … instead of incarceration?  How many public health problems could be solved?”  Indeed, I suspect the health of these “million dollar blocks” would look a lot different if we could shift the focus from incarceration to community development.

This systemic pattern of incarcerating black and brown young men from a few city blocks is a continuation of decades of social, political and cultural exclusion based on race.  Legal scholar and litigator Michelle Alexander has a new book, The New Jim Crow: Mass Incarceration in the Age of Colorblindness, in which she argues that we have not ended racial caste in America: we have simply redesigned it. Her work shows that by targeting black men and decimating communities of color, the U.S. criminal justice system functions as a contemporary system of racial control, even as it formally adheres to the principle of color blindness.

So, while it is important to celebrate the victories over Jim Crow won at lunch counters, it is imperative that we look for ways to dismantle the current, pernicious system of Jim Crow segregation.