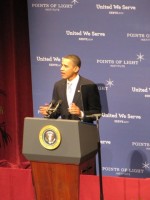 At a major national community service forum at Texas A&M today, I got to hear the first sitting president I have ever heard in person. President Obama gave a strong and aggressive speech on the importance of community service and volunteerism. This was a forum sponsored by the Thousand Points foundation set up by President Bush-41 some years back. While such volunteerism has serious limits and certainly is no substitute for major structural reforms and significant action to bring an egalitarian society—and many conservatives do see it as that substitute—it does bring out the best in many Americans. In his speech, actually, Obama was careful to point out the limits of volunteer and service efforts to bring substantial change in society’s big problems of social justice, something rarely heard from politicians on this subject.

Some great organizations and efforts were celebrated today, and are facilitated by this foundation—as well as the usual band-aid organizations. Obama noted too that there have been huge increases in applications for the Peace Corps and AmeriCorps, suggesting that even better service organizations might also get lots of applicants. (At Texas A&M University record numbers of students get into volunteer work these days, against much of it limited local community service work but efforts that suggest greater challenges might attract some of them.)

The media coverage I saw (or heard about from my students) of the event and the buildup to it was often lousy and slanted toward the “if it bleeds it leads” school of contemporary journalism. They had played up the conservatism of Texas A&M University and/or the likelihood of thousands of right-wing demonstrators. Actually only 100-200 demonstrators showed up, and there were also numerous supporters of Obama who demonstrated for him. They were mostly kept far away from the campus venue too. And the audience of 3000+ in the university auditorium gave President Obama by far the strongest standing ovation of the ovations given to the many dignitaries there (including Bush-41 and Secretary Gates, members of Congress, etc). 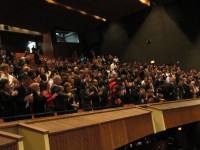 Also distorted by the mass media is Obama’s political agenda and efforts. I learned today from his speech about huge supportive efforts he and his staff have engaged in to facilitate and increase community service by Americans, especially young Americans—including the Ted Kennedy service Act he signed that expands several of the service corps. See here for some information. Substantial governmental money has been put behind these efforts. Why hasn’t the media covered this rather extensive effort to facilitate community service by Americans of all ages and backgrounds?

Still, I worry that such an emphasis on volunteer service, Obama’s qualifications notwithstanding, does and can deflect our national attention to getting on with the major structural changes we need to make in order to make this the substantially egalitarian society it claims to be.