I’ve been watching the angry mobs lobbying against health care reform with increasing trepidation. It seems pretty clear that many of those in attendance are tied to extreme right-wing racists, such as the militias. 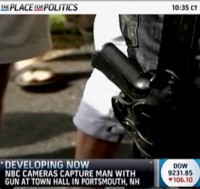 And yet, as Gene Lyons accurately points out in a piece on Salon.com today, ‘you won’t win the healthcare debate calling people ‘stupid racists.’ Agreed.   (h/t to Paul Younghouse at Brainstorms for both these links.)

So then, the question becomes, what’s the better – more effective – strategy for addressing the deep racism running through the health care debate?   Anyone?