I’ve written here before about Facebook Racism, the rise of various forms of racism at the incredibly popular social networking site (SNS).  According to a report from 2008, Facebook currently has something like 120 million active users and is an established feature of the youth culture.   While some have touted social media in hyperbolic terms like providing a “new path to world peace and end racism,” there are some stark realities about Facebook that run counter to that sort of exuberance.

In terms of demographics, people are just not “mixing” or intermingling across racial lines in significantly different ways than they do offline.  Recently, danah boyd gave a talk that highlighted the sociodemographic divisions between Facebook and rival SNS, MySpace, noting that those on Facebook are “part of what we’d call hegemonic society, [and] primarily white, but not exclusively” while those on MySpace are more often Latino/Hispanic.

Whites who are on Facebook — which was created at Harvard (and once, a Harvard-only space) — often have the illusion that they are talking in the “backstage” in a private, whites-only space.   Take for example, a woman named Lee Landor who, until very recently, worked as the deputy press (!!) aide to Manhattan Borough President Scott Stringer (kind of like a mini-mayor).  Landon resigned her job due to a series of Facebook posts and comments she made related to the arrest of Harvard scholar Henry Louis Gates Jr. (written about here elsewhere extensively).  Landor on Facebook said some things that are not that different from some of the comments we’ve seen here at this blog, for instance:

“You know what, I am really getting SICK of hearing about how white people are evil racists. Black people, Hispanic people, Indian people, Asian people, whoever, are being over-the-top racists in recent weeks, as highlighted in the media since the Sotomayor-New Haven issue.”(Screenshots of her comment available here.)

And, of course, there are the racist and antisemitic groups that sponsor ‘group pages’ on Facebook, that the owner/administrators seem reluctant to address.

Perhaps more disturbing than all this (and, it’s plenty disturbing), is the way that racism is being built into the interface at Facebook with the help of Microsoft.  A few days ago, I received an email from a blog reader.  He said that while searching for a friend’s using a last-name-search (the last name was close to the word “RACE”), a racist ad showed up that is powered by the new Microsoft’s new search enging Bing. The reader sent a screen grab, and here it is: 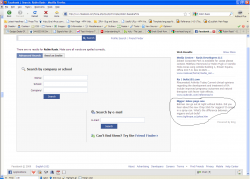 Here, in case you can’t see the circled text, is an advertisement within the Facebook interface to a site that offers visitors “Ni**er” jokes.  Here’s the closeup of that ad:

Now, the way these ads on Facebook work is that Bing (product of Microsoft) pays Facebook for the space on the right there.  Then, Bing has a collection of advertisers that they will place on Facebook.  The software at Facebook runs an algorithm (computer program) to match the ads on the right with whatever terms you type into the little search window space.

The point is, the racist text there is not just something that Facebook and/or Bing accidently “turned up.” This ad was payed for (by the people that run the “Ni**er” jokes site), and the companies of Bing and Facebook profit from that. Bing actually gets money when someone clicks on that ad, and they have a clear responsibility there.   Someone at Bing (or Facebook) either approved or, at the very least, failed to block the ad (thanks to David Brake for this point).

The reader who sent this to me is diligently trying to track down someone at Bing and/or Facebook to take responsibility and take action, but that turns out to be a daunting task.  So, here’s my bit to help out – posting this here.  You can help by linking to this post, sharing it with friends, and spreading the word.