As we watch the hearings in the US Senate on Judge Sonia Sotomayor’s nomination, we can reflect on some images generated about her in most parts of the conservative sector and in the mass media that often plays lapdog for conservatives’ views. One conservative view accents her previous talks and speeches (but not, interestingly, her decisions in this regard) that indicate her important experiential understandings as a woman of color (“wise Latina”) and attacks her for thinking and operating necessarily out of her own racialized and gendered experience, as if that is possible for white men to do.

Indeed, when Senator Tom Coburn (R-OK) questioned now Supreme Court Justice Sam Alito about these matters in his hearing a few years back, Coburn and other conservatives did not challenge this candid answer that Alito gave indicating that he operated very much out of his own experience (H/T Glenn Greenwald and Dailykos video ) in his own thinking about cases as a judge:

Because when a case comes before me involving, let’s say, someone who is an immigrant — and we get an awful lot of immigration cases and naturalization cases — I can’t help but think of my own ancestors, because it wasn’t that long ago when they were in that positionAnd so it’s my job to apply the law. It’s not my job to change the law or to bend the law to achieve any result. But when I look at those cases, I have to say to myself, and I do say to myself, “You know, this could be your grandfather, this could be your grandmother. They were not citizens at one time, and they were people who came to this country.”

Isn’t Alito here speaking about having some human empathy for immigrants because of his own family’s immigrant experience? Yet, Coburn and other numerous conservatives (and some others) lately have tied some of what Sotomayor has said about her similar experiences to President Obama’s stated concern for judges to have empathy across important lines in society—apparently a bad thing to have, especially for many white conservatives, including many Republicans in Congress. Indeed, Sotomayor has been forced the last day or two to disagree with President Obama’s earlier statement on empathy in judging, and to assert what Alito does in this comment–that she does not make or bend the law to her personal views (etc.).

Is this conservative attack on the concept of empathy as it is raised by people of color like Obama and Sotomayor because they are afraid that real empathy across color lines is indeed corrosive of the oppressive structure of society, from which they greatly benefit? Hernan Vera and I have argued that individual racism and systemic racism generally require a lack of real inter-human empathy, what we call “social alexithymia”? Doesn’t US racism, past and present, require a breakdown of real empathy in the dominant racial group? Is real empathy corrosive of racist framing and much racist action?

Dailykos has an interesting June 2009 poll on how the public sees this judge/empathy issue. People we asked, "Do you think empathy is an important characteristic for a Supreme Court Justice to possess or not?" This was the breakdown for key demographic groups:

All age groups have a majority or plurality that said yes, but those under 30 are more oriented this way than older groups.

Whites barely have a plurality for judges having empathy, but you can see that folks of color, who experience the harsh end of everyday racism, are far more likely to see human empathy as important, even though it is not defined in this survey. Majorities there seem to be coming from the same place as Judge Sotomayor in her comments. It would be interesting to do in-depth interviews to see what people understand the word “empathy” to mean. The survey also had an interesting gender breakdown:

Both men and women  were more yes than no, but the women were more strongly in the yes column. A majority of the whole sample comes down on the side of empathy for judges, white male Senators notwithstanding!

Let us explore some more aspects of this gender and leadership issue in another major survey of 2,250 adults done last year by the Pew Center. It is revealing in regard to various gendered matters that clearly relate to societal debates on Judge Sotomayor, and on other women recently nominated or appointed to key positions. The survey asked about the leadership traits and assets of men and women. The public, interestingly, seems more enlightened than some US senators. 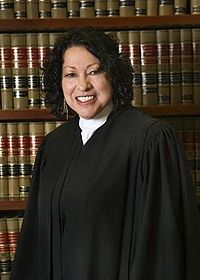 On most leadership traits women did better than men. Half of the survey respondents viewed

women are more honest than men, while just one-in-five say men are more honest (the rest say they don’t know or volunteer the opinion that there’s no difference between the sexes on this trait). And honesty, according to respondents, is the most important to leadership of any of the traits measured in the survey.

Then there is the old saw that men are more intelligent, which was not accepted by the sample:

Here again, women outperform men: 38% of respondents say women are smarter than men, while just 14% say men are smarter, and the remainder say there’s no difference between the sexes.

On the qualities of hard work and ambition, there was a tie, with equal percentages citing women and men on each as better. Men did best on only one of the traits, decisiveness

with 44% of respondents saying that men are more decisive and 33% saying women are.

Most strikingly, perhaps, women had huge

Significantly, the African American women were the most pro-female (womanist) in their views:

I could not find a breakdown for Latinas or other women of color in the sample, but one might expect them to be closer to black women than white women? Most of the respondents also thought women made as good leaders as men, about 69 percent said so. If so, then, why are there so few women leaders in many sectors of society? The survey respondents agreed that it was substantially because of gender discrimination and the old boy’s club, with smaller percentages accenting women’s family responsibilities and lack of experience. However, Even with high marks for these virtues, women (the 51 percent population majority in the US) do not do well at the top of the society, as these statistics indicate:

2 percent the CEOs of Fortune 500 companies

16 percent of U.S. senators and governors

And the statistics are even worse for women (and men of color), especially for Latinos/as like Sotomayor. It is odd that no one in the hearings has analyzed well the point that out of 110 Supreme Ct. justices so far in our history, 106 have been white men, virtually all elite white men. And this is supposed to be some sort of democracy? It is more like a male-ocracy?

It is significant that there seems to be some recognition of the gender discrimination faced by women in the survey too:

A majority of adults (57%) say the nation needs to continue to make changes to give women equal rights with men. A similar majority (54%) says discrimination against women is either a serious or somewhat serious problem in society

Now, the greatest political difficulty is getting some real societal change in the gendered, and gendered racist, structure of this society.