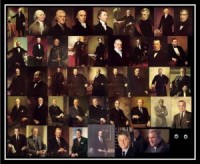 A couple of weeks ago, an administrative assistant working for a Republican elected official  in the Tennessee state legislature sent around an email with this image (from here) and the caption,  “Historical Keepsake Photo.”

As you may or may not be able to tell from the image, it depicts all the presidents of the U.S. through to the current one, and in place of a portrait of President Obama, there is only a dark square with two eyes peering out.    The image evokes the racist blackface iconography characteristic of the Jim Crow era.

Just as we witnessed during the campaign, racist imagery has been a consistent feature of the white response to Obama’s emergence on the national political scene.

The fact that this came from a state government office suggests that this sort of white supremacy is not relegated to some marginal, fringe element of the population, but rather resonates within the mainstream of elected politicians.

If there’s a bright spot here, it’s that someone – an unnamed administrative assistant – thought that the image was wrong and forwarded it to someone outside her office.      It’s these kind of ‘race traitors’ that can work to disrupt the persistent repetition of the drum beat of white supremacy.

A prominent South Carolina Republican [Rusty DePass] killed his Facebook page Sunday after being caught likening the First Lady to an escaped gorilla. Commenting on a report posted to Facebook about a gorilla escape at a zoo in Columbia, S.C., Friday, longtime GOP activist Rusty DePass wrote, “I’m sure it’s just one of Michelle’s ancestors – probably harmless.”

He, like most white racist commentators these days, of course apologized, and guess what, claimed:

“I am as sorry as I can be if I offended anyone. The comment was clearly in jest.”

Odd, how joking is supposted to make blatant racism OK….. DePass is not a small fish, but

And, of course, the other prominent Republicans are pressing him to apologize:

Eric Davis, the current chairman of the Richland County Republicans, said his predecessor should get a pass. “Everyone says stupid things they regret later. I think the world should move on,” he said.

Racism is just no big deal for many white Americans. See too how that old white racial frame is powerful, as whites just cannot seem to let go of the ape imagery for Americans of color. This stuff is hundreds of years old. One finds it in Thomas Jefferson’s Notes on the State of Virginia, our first major book by our first secular intellectual–and white supremacist thinker.

Why are white men so slow to learn about what is blatantly racist in our post-racial America?