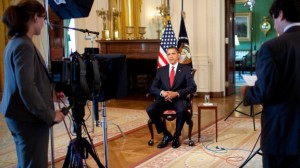 President Obama has just nominated the first woman of color, a Latina, Sonia Sotomayor, ever for the US Supreme Court. It is way past time for this. Only four of the 110 Supreme Court justices ever serving on that high court–which operates much like an unelected legislative body in our system–have not been (mostly elite) white men. Here is the White House report and video.

A DailyKos Diarist, AlRodgers, has some great photos at this link.

Here is some of her personal and civil rights background as listed by Rodgers:

► Raised in the Bronxdale Housing project, in the South Bronx, New York

► Her father was a tool-and-die maker, who passed away when she was 9.

► Raised with her brother by single-mother, who was a nurse in a methadone clinic.

► She earned her law degree at Yale, where she was editor of the law journal.

► At 40, she became the youngest judge in the Southern District of New York and the FIRST judge of Puerto Rican descent.

► Board member of the Puerto Rican Legal Defense and Education Fund.

That last item is very revealing. This PRLDEF organization on which she serves as a board member is one of our leading civil rights organizations.

For example, they have been working very hard to deal with the discrimination against Latino workers and immigrants that we have blogged about several times in recent months. See here, for example:

LatinoJustice PRLDEF has warned Mahopac Town Supervisor Kenneth Schmitt that his attempts to initiate a program which would authorize local police to arrest Latino day laborers on public sidewalks could lead to a costly lawsuit.

Latinos in Plainfield, NJ won a major legal victory when a Federal judge dismissed a claim alleging that renting apartments to undocumented immigrants constitutes unlawful harboring. Attorneys from LatinoJustice PRLDEF filed an Amicus Brief in the case on behalf of Latino residents of several rental communities in Plainfield managed by Connolly Properties, Inc. There have been mounting tensions in Plainfield over its growing immigrant population, including a series of beatings and robberies targeting Latinos.

It will be very interesting to watch how conservatives and Republicans deal with this matter. Attacks on her will alienate not only much of Latino/Hispanic America, but also much of the Latino world outside the US. As well as most progressives of all backgrounds. What is your take on this excellent nomination?

Southern studies has an interesting discussion of the potential significance of this nomination for voting rights, given Sotomayor’s opposition to attempts to keep voters of color out of the voting booth:

FELON DISENFRANCHISEMENT: Judge Sotomayor’s biggest voting rights case has likely been Hayden v Pataki. In this 2006 case in the 2nd Circuit, ex-felon Joseph “Jazz” Hayden brought a challenge under the Voting Rights Act against New York’s law banning ex-felons from voting. Civil rights advocates had mobilized around the case, saying felon disenfranchisement laws showed a clear history of racial discrimination. The [appellate court’s] majority dismissed the case, but Judge Sotomayor dissented, saying the issue of discrimination was actually quite simple, as SCOTUSBLOG reports: “[Sotomayor] opined that the issue was actually much simpler than the majority and concurring opinions would suggest: the VRA “applies to all ‘voting qualifications,'” and – in her view – the state law “disqualifies a group of people from voting.” “These two propositions,” she concluded, “should constitute the entirety of our analysis.”

There is also a good detailed discussion on SCOTUSBLOG about her qualifications as revealed in her many court decisions.

The nomination has gotten lots of white supremacist types into an assassination mode, as an ad was put into a paperin Pennsylvania to that effect. Other stuff like this too::

“Unfortunately, the attitude of the person who placed the ad is too prevalent in Pennsylvania,” said Michael Morrill, the executive director of Keystone Progress. “In the last few days we’ve gotten emails calling the president ‘chimp’ and the n-word after he nominated Judge Sotomayor. It makes it very difficult to organize around issues when the opposition to the president’s policies is so racially charged. ”

Update three: More commentary from our blogger, José A. Cobas:

I find the discussion of Sotomayor’s nomination in the white-dominated media replete with absurdity. Suggesting that Cardozo belongs in this discussion is nonsense. Cardozo was a Sephardic Jew whose family lived in Portugal for a time. [They migrated later, directly from England.] It was not unusual for Jews in the Iberian Peninsula to take Portuguese or Spanish surnames. Cardozo’s self-identity was Jewish. He was appointed to the “Jewish” seat in the Supreme Court that Felix Frankfurter had vacated. As Rubén Rumbaut put it, to suggest that Cardozo was Hispanic makes as much sense as saying that the last baseball player to hit .400 was Hispanic. (Ted Williams’ mother was from Mexico.) White elites have been very diligent in protecting the boundaries of the white racial category. Their casual use of “non-white” racial categories is simply a reflection of the fact that in the U.S. racial world the difference between whites and every other racial group is where the action is. The identity of the “other than white” masses is inconsequential.