Racism is harmful to the mental and physical health of those who are the targets, yet little research has explored the impact of racism on those who perpetrate racism (photo credit: JessieNYC). 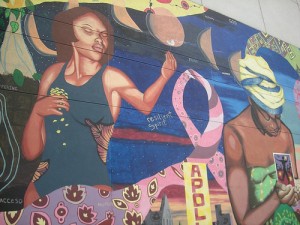 First, the health impact of racism is well documented.  I’ve written about this many times before, as have other scholars who blog here,  but here are a few of the relevant studies.

In terms of physical health and longevity, there is evidence that racism shortens peoples’ lives.   A U.S. study found that discrimination increased mortality (rates of death) among African Americans compared to whites in a large sample (N=4154) of older adults.   At the beginning of life, racism also takes a toll.   Another study in the U.S. finds that black-white difference in infant mortality (deaths among those 0-1 years old) is due to racism, not race per se.   (More about racism and infant mortality here.)  And, if you take into account Native Americans’ health, the research clearly documents they suffer worse than average rates of depression, diabetes and cardiovascular disease (lots more on Native American health here).

In terms of mental health, racism costs people their sanity.   One Dutch study of 4,074 people found that those who felt victimized by discrimination and forms of racism were twice as likely to develop psychotic episodes in the following three years.  Being on the receiving end of racism creates intense and constant stress which boosts the risk of depression, anxiety and anger.

And, of course, because of the mind/body connection, factors like depression, stress (as Claire noted in her recent post) and anger can lead to or aggravate high blood pressure and heart disease.    Even when people seek care to address these health issues, research consistently shows that racial and ethnic minorities receive inferior care compared to whites, even when everything else is equal (e.g., insurance, income, age, and severity of conditions).

Camara P. Jones, MD, MPH, PhD, is research director of Social Determinants of Health for the CDC is a leading specialist on the health impact of racism.  According to an interview with Jones:

“We know that black folks are at higher risk of hypertension, but in childhood, there are no differences between black and white blood pressure rates. By the time you get into the 25-44 year-old group, you start to see changes. We have evidence that in white folks, blood pressure is dropping at night, but not in black people.    There’s a kind of stress, like you’re gunning your cardiovascular engine constantly if you’re black that results from dealing with people who are underestimating you, limiting your options. It results from little things like going to a store and if there are two people at the counter — one black and one white — the white person will be first approached. If you have stress from other sources, like a bad marriage, it’s not something you think about constantly. But the stresses associated with racism are chronic and unrelenting.”

Jones goes on to say that her research suggests that 50% of blacks think about their race at least once a day (and 22% said they think about it constantly), while in sharp whites rarely give any thought to their race in the course of a day.

And, it’s this part of the racism and health puzzle that’s little researched.  While “whiteness studies” have been en vogue in the humanities and social studies for about 10 years, the academic trend has yet to have much of an impact on the study of health disparities.     Few medical or public health researchers have taken up the investigation of what Joe has called the  white mental health problem of persistent racism.

In a 2006 piece I co-authored with my colleague  Amy Jo Schulz (Daniels, J., & Schulz, A.J. (2006). Constructing whiteness in health disparities research. In A. J. Schulz & L. Mullings, (Eds.), Gender, Race, Class, and Health (pp. 89-127), in which we examined the way that whiteness and white racial privilege are part and parcel of health disparities research.   Here’s a brief excerpt that describes what typically happens in the “disparities” research:

“..the use of racial categories and comparisons with no consistent foundation for theorizing, understanding, or interpreting observed racial differences (or their absence) in health outcomes provides space for a wide range of potential explanations.  Each of these “explanations” implicitly or explicitly constructs both race and Whiteness.
For example, within the literature on racial disparities in cardiovascular disease, comparisons of Black or Latino/a to White Americans show disparities not only in cardiovascular mortality rates (Cooper and others, 2000; Wong and others, 2002) but also in multiple risk factors, including high blood pressure (Cooper and Rotimi, 1997; National Heart Lung and Blood Institute, 2004; Crespo, Loria, and Burt 1996), obesity (James, 1999; Kumanyika, 2001), physical activity (Brownson and others, 2001; Crespo and others, 1996), and intake of micronutrients and macronutrients associated with cardiovascular risk (Li and others, 2000).  In the absence of an explicitly social theory of race, analyses explaining racial disparities in cardiovascular disease in terms of biological, “lifestyle,” or “cultural” factors can reify racial differences and obscure connections to socially structured inequalities. In other words, explaining racial differences in health in terms of individual biology, genes, or behavior can locate health problems in the bodies of those most negatively affected by social inequalities.  Such explanations fail to make explicit connections to histories of racism and the struggles against oppression by subordinated groups (Bonilla-Silva, 2003; Mullings, 2005).  In the process, they also take out of the equation—and thus make invisible—the processes through which Whites maintain positions of relative advantage or privilege within racial hierarchies. In this sense, such explanations are consistent with the “colorblind” strategies of neoconservative and neoliberal Whiteness projects described above, in that they explain racial disparities in health in nonracial terms. “

Put another way, there are no actors in the world of health disparities research.  There is only the passive voice of ‘structural inequality.’   Indeed, I witnessed this firsthand in on a meeting I sat in on recently about how to address infant mortality in New York City.   When one of the people of color gathered around the table raised the issue of addressing racism as a root cause of infant mortality, one of the white people responded with a laugh, “well, I don’t think there’s much we can do to address racism.”   This kind of flippant defeatism on the part of whites is surely part of the problem.

The fact is, racism continues to extract a toll from people of color in terms of physical and mental health.   It brings death sooner to the elderly and diminishes the life chances of the newly born.    As this inequality persists and there continues to be lots of agreement among liberals that this sort of inequality is wrong, there is scant little attention paid to the ways that we can dismantle racism and improve everyone’s health, rather than continuing the current system of inequality that systematically and disproportionately benefits the health of white people.