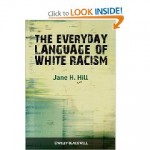 The former president of the American Anthropological Association, Jane Hill, has a fascinating new book, The Everyday Language of White Racism. She analyzes how whites’ racial oppression, white power and privilege, are daily created and reinforced in routine English. Central here is analysis of hundreds of cases of mock Spanish phrasing (“hasta la vista, baby; no problemo; knock back some cervazas, etc) and how widespread that is–and how it assumes racial stereotyping from the white racial frame about Mexicans, Mexican Americans, or other Latinos.

Hill reports, significantly, that almost no whites she has presented the material to are willing to see how such mock Spanish embeds racist stereotyping and framing.

She offers a probing and provocative analysis of whites’ use of other racist language, such as the insistence in Arizona on preserving the name of a mountain as “squaw peak,” “squaw” being a derogatory and racist term used by whites for Native American women some time now. There is also much language mocking by whites of so-called “black English” and of the speech of Asian Americans.

Hill offers excellent discussions of how and why whites come to define racist outbursts, such as those of Senator Trent Lott, comedian Michael Richards, and talk show host Don Imus, as only “gaffes” that do not reveal racist framing by whites who engage in such behavior. This research makes clear the central role of the English language in embedding and perpetuating the white framing and the system of racism that it defends.

Hill makes great points about how everyday racist language and “gaffes” contradict the arguments not only of white defenders of this still-racist society, but also of some critical race analysts who want to describe contemporary reality only as a “new racism.” In her view the widespread character of these examples of everyday racism, and the way they also get discussed obsessively and circulated extensively around the society, indicate that the old-fashioned racism of the past has not disappeared and been replaced by a new racism, not at all. At most, what is new is only a thin veneer of denial–as in white denial that mock Spanish and other language mocking is racist.

Research here takes notice too of the absences and omissions in what many whites do “say” in many cases. Much racist commentary now uses codewords that (wink wink) communicate racist ideas or inclinations without actually using the old racist words (for example, “lack of sense of humor” or “oversensitive”–or, even more concretely, “public housing, “inner city,” or “gangbangers”).

Hill is savvy about how much white defensive behavior operates when challenged, as in the cases of mock Spanish or the Arizona debate over the mountain peak. Whites have constantly denied that their perspective was racist and harmful, even as many people of color pointed out the harm and damage the mocking language caused. A key factor in how the white racial frame and systemic racism operate today is what Hernan Vera and I have called “social alexithymia,” the inability of whites to understand where people of color are coming from, the lack of cross-racial empathy. As Hill puts it, this lack of empathy

Involves a chain of reasoning that goes something like this: “I am a good and normal mainstream sort of White person. I am not a racist, because racists are bad and marginal people. Therefore, if you understood my words to be racist, you must be mistaken. I may have used language that would be racist in the mouth of a racist person, but if I did so, I was joking. If you understood my meaning to be racist, not only do you insult me, but you lack a sense of humor, and you are oversensitive.” Notice that this entire chain of reasoning makes the speaker the sole authority over what her worlds shall mean.

One central question today is: Why are whites so unwilling to listen to the views of those who are targeted daily by racism, even about the reality, character, harm, and pain of that everyday racism? The intensiveness and emotional scale of that denial seem to signal substantial proof of the continuing reality of everyday racism.