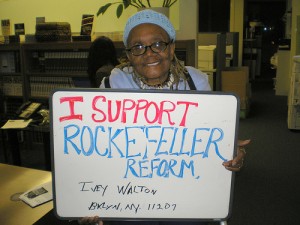 New York State has a punitive and racist drug laws, and it’s time to change them.   In a recent piece, Russell Simmons, hip-hop mogul and activist, and Gabriel Sayegh of the Drug Policy Alliance, write about Rockefeller reform (image from here).  In case you’re not familiar with the Rockefeller Drug Laws, here’s a little background from the article:

The Rockefeller Drug Laws passed in 1973, mandate harsh mandatory minimum prison terms for simple, low-level drug offenses. Under these laws, people convicted of first or second time low-level drug offenses receive long prison terms-not the treatment or support services they often need. … Today, there are approximately 12,000 people in New York prisons under the Rockefeller Drug Laws, more than 90 percent of who are Black and Latino. There is no excuse for this disparity – whites and people of color use and sell illegal drugs at approximately equal rates.

There’s a new documentary film called “Lockdown, USA” that examines the effort Simmons, and a few other folks, have been involved in to end the Rockefeller Drug Laws.   The film focuses most closely on Simmons and one family that he works to help.    It’s compelling to watch Simmons work the phone and get in the face of politicians who are unaccustomed to his style of lobbying for reform.  Although the film does a good job of exploring the injustice and waste of the draconian Rockefeller Drug Laws, the racial inequality is implied rather than directly explored.   In the DVD’s extras, there’s an interview with an African American woman and lobbyist who talks candidly and persuasively about the inherent racism in the laws, but unforutnately this didn’t make into the film.  Still, it’s an excellent look at the messy business of working to bring about change.

The hard work of Simmons, the Drug Policy Alliance, the Drop the Rock campaign, the New York Academy of Medicine, and countless individual activists has finally begun to pay off.  Right now, there’s a bill in the New York State Assembly that will dramatically reform this institutionalized racism, and you can get involved by  taking (online) action to let New York Governor Patterson know that you support the end of the Rockefeller Drug Laws.