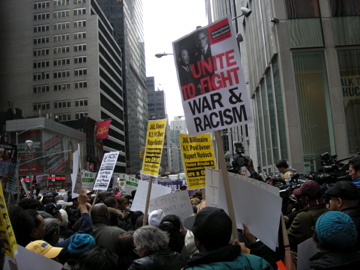 Yesterday, I joined a small crowd of fellow New Yorkers fed up and outraged by the racism of the New York Post’s editorial cartoon.  (The image is one that I took, you can see the full set of photos at Flickr.)  As usual with any protest about racism here in New York, there were lots of black and brown folks there, and not so many white folks.   Not surprising, but disappointing nevertheless.   One of the most notably missing white faces in this crowd was Mayor Mike Bloomberg, who has not issued a statement about the cartoon.    Governor Patterson, speaking yesterday at an event unrelated to the cartoon at the New York Academy of Medicine, did respond to questions about the racist cartoon, saying that it is incumbent upon Post editors to explain “what the cartoon was intended to portray.”   Paterson added, images equating blacks with primates “do feed a kind of negative and stereotypical way that some people think,” and thus stretching the definition of “understatement.”

For its part, the editors at The New York Post have issued an apology that is a non-apology, saying:

Wednesday’s Page Six cartoon – caricaturing Monday’s police shooting of a chimpanzee in Connecticut – has created considerable controversy. It shows two police officers standing over the chimp’s body: “They’ll have to find someone else to write the next stimulus bill,” one officer says. It was meant to mock an ineptly written federal stimulus bill.   Period.   But it has been taken as something else – as a depiction of President Obama, as a thinly veiled expression of racism.  This most certainly was not its intent; to those who were offended by the image, we apologize.   However, there are some in the media and in public life who have had differences with The Post in the past – and they see the incident as an opportunity for payback.    To them, no apology is due.  Sometimes a cartoon is just a cartoon – even as the opportunists seek to make it something else.

Those of you who’ve been following this issue closely will recall that the previous statement from The Post referred to Rev. Sharpton as a “publicity opportunist,” so this statement is clearly directed at him and others affiliated with his National Action Network.  As Rev. Al said last night when asked by Keith Olbermann about the “publicity opportunist” charge, “I’m an activist, so getting publicity is part of what I do.  At least they are acknowledging that I’m good at my job.”

The official written response from the editors of The Post is consistent with what I witnessed yesterday happening in midtown just beyond the perimeter of the protest.    The white office workers who came to the window at the News Corp building laughed, pointed and jeered.  One of my fellow protesters said they saw someone at the windows give the one-finger salute to the crowd gathered below, but I didn’t see it.   The white office workers on their lunch break that I overheard along 6th Ave. (across the street from the protest), said things like, “Wow – look at all of them!  I can’t believe they got that many to come out in the middle of the day, I guess they don’t have jobs.”

Clearly, we still have a lot of work to do in this putatively post-racial era.   If you’d like to take some action on this particular issue, you can sign on to the letter of protest at Color of Change.   If you’re in the New York City area, there’s another protest in front of the News Corp building (6th Ave., between 47th and 48th) later today, Friday, February 20th, at 4:45pm.

UPDATES (2/24/09): Lots has happened on this story since Friday.  Among the highlights (or, low lights if you prefer): There are widespread reports of dissention  in the ranks of The New York Post over the cartoon, ranging from an email sent by editor Sandra Guzman to reporters, saying she had “nothing to do with the cartoon,” to today, Murdoch including his own, slightly less half-hearted, apology in the paper. Michael Wolff, author of a book about Murdoch, appearing on Olbermann’s MSNBC show speculates that Murdoch is “livid” about the cartoon, and predicts that this is a career-ending decision for Col Allen, the current editor of The New York Post.   Meanwhile, Benjamin Todd of the NAACP is calling for the firing of Sean Delonas, the cartoonist who drew the offensive chimp-cartoon.    And, I continue to be amazed (I know, I know – I shouldn’t be) by the number of white people (and some other folks) who just don’t get the racism of this cartoon.