In an article in the January (2009) issue of The Progressive, political analyst Chip Berlet argues that the election of Barak Obama “has poked the racist beehive, and we can expect a lot of buzzing around in the months ahead,” (p. 27). Berlet notes the increase in racist incidents – e.g., cross burnings, arsons – in communities throughout the United States following the election, with the Southern Poverty Law Center noting that the rate has been far above “normal.” 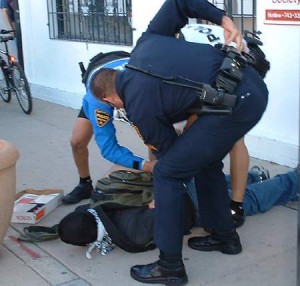 Berlet remarks that rightists of all kinds are “eager to reframe issues in ways that invoke racialized fears” among white citizens (p. 27). Interestingly, as I read this, I thought of the recent exchange on this blog regarding Jessie Daniels’ post on the Grant police brutality case. I think some of the reaction to Jessie’s analysis reflects the success of the previous political administration and various right-wing groups in convincing many of us that we have much of which to be afraid and from which we need protection. The law-and-order, lock-em-up approach to criminal offending in this country – so much a part of the “War on Drugs,” as well as the “War on Terrorism” – has garnered widespread mainstream support and resulted in a dramatic rise in incarceration rates such that the United States now has more citizens in prison than any other country in the world. Many people are convinced that the police must be aggressive in combating crime and catching “bad guys,” and in doing so, they may make some mistakes, but they’re “honest mistakes”; the police, after all, are “just doing their job” (image from here).

Ironically, crime in the United States has declined fairly steadily since the 1990s, and many criminologists attribute at least some of this decline to the prosperous economy during this period. Given the current economic crisis, we can be fairly confident that crime rates will be on the upswing, and we are likely to hear an outcry for more police intervention. I doubt, however, if many of those who demand such action will be expecting law enforcement to arrest the “white collar” offenders on Wall Street who precipitated this mess in the first place, or those in the previous administration whose gutting of regulatory legislation helped fuel Wall Street greed. Such offenders are rarely considered “criminals” and their offenses aren’t viewed as “real crimes.” Instead of “crime in the suites,” law enforcement will be focused on crime in the streets, and those most likely to be caught up in any new “crime crackdown” will be those who are always the first targets of law enforcement: the poor, and racial and ethnic minorities who are disproportionately represented among the poor. But this time, we have a liberal Democratic president in office, who also happens to be African American, which returns me to my opening concern. If crime increases during Obama’s first term in office – and it most certainly will – rightists will likely use it to invoke racialized fears.

No doubt some of the comments about Jessie’s original post on the Grant case were offered by members of rightist groups, who lurk on progressive blogs to try to disrupt the dialogue. I see this not infrequently on feminist sites when members of fathers’ rights groups post comments about women being as violent as men or claims that divorcing mothers falsely accuse their spouses of abuse. This, though, actually bothers me less than attempts to saturate the mainstream with racist fears. If rightists feel the need to infiltrate a progressive blog such as this one, we must be doing our work well; they’ve noticed us and we’re cause for them to be concerned. What is more important, then, is for progressives to be certain not to just talk among ourselves and to like-minded folks, but to discuss these critical issues more broadly and to debunk racist myths whenever and wherever we find them. In other words, we need to knock down the racist beehive.