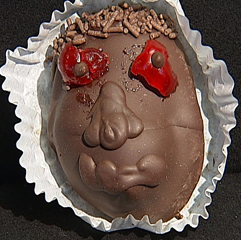 Racism is alive and for sale in pastry-form in New York’s Greenwich Village.  I’m working on a longer, more thoughtful post, but just had to quickly put this up because, well, the mind-boggles sometimes. Here’s the story (h/t: dumilewis via Twitter):  a New York City baker,  Ted Kefalinos, proprietor of Lafayette French Pastry, is selling a cookie he calls the “drunken negro cookie” (photo and details of the story from Gothamist).  A  customer told a local news outlet that Kefalinos, asked her:

“Would you like some drunken negro heads to go with your coffee? They’re in honor of our new president. He’s following in the same path of Abraham Lincoln; he will get his.”

A bit later, another customer reportedly came into Kefalinos’ shop, asked about the name of the cookies and said Kefalinos corrected her about the name of the cookies, saying they’re actually drunken “N-word” cookies. The second customer says that the baker then repeated the suggestion that, like Lincoln, President Obama “will get what’s coming to him.”

Despite several attempts by various reporters to let Kefalinos come up with a resonable explanation for his actions, he remains apparently clueless.

I have a few of thoughts about this, some of which I’ll explore in the longer post I’m working on, but briefly: 1) let’s retire those silly notions about racism residing exclusively below the Mason-Dixon line;  2) the mere presence of President Obama is, as a friend of my said the other day, “goes down hard” for some people; and, so, 3) let’s not kid ourselves that just because we’ve got a African American head of state that everyone’s ready to embrace racial harmony and sing kum-ba-ya.