The Associated Press just reported on a research project in Toronto that shows how 120 college-educated whites reacted to a racist act. They were recruited for a “psychology study,” and faced this experimental set-up whose purpose they were unaware of:

A participant was directed to a room where two actors posing as fellow participants — one black, one white — waited. The black person said he needed to retrieve a cell phone and left, gently bumping the white person’s leg on the way out. The white actor then did one of three things: Nothing. Said, “I hate when black people do that.” Or used the N-word.

The researcher then came in to start the “study” and asked each participant to pick the white or black person as a partner for the study.

Students who actually experienced the event didn’t seem bothered by it — and nearly two-thirds chose the white actor as a partner, the researchers reported Friday in the journal Science. “It’s like these nasty racist comments aren’t having an effect,” said York University psychology professor Kerry Kawakami, the lead author. . . . The study can’t say why people reacted that way, although the researchers speculate that unconscious bias is at work.

CNN’s report on the same study added this:

The magnitude of the results surprised even the authors, Kawakami said. Experiencers reported little distress in all three scenarios . . . . “Even using that most extreme comment didn’t lead people to be particularly upset,” said co-author Elizabeth Dunn, assistant professor of psychology at the University of British Columbia.

Even white researchers working on racism issues like this seem to be unaware or unreflective about how fundamental and widespread the white racial framing of North America really is. A great many whites react this way because they in fact do think in blatantly racist terms about black people (but may reserve openly racist comments for white backstage areas) or because they do not find the racist actions of others to be “serious,” especially serious enough for them to intervene in and risk losing a friend or acquaintance. 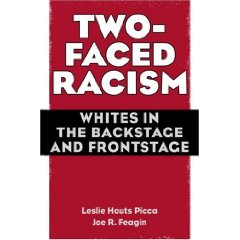 Leslie Picca and I found this reaction to be commonplace. Nowhere in our 9,000 diary accounts of racial events from 626 white college students at 28 colleges and universities is there even one account of whites, including the student diarists, assertively protesting a case of racial discrimination by white actors and authorities in a frontstage setting.

Only occasionally in the journal accounts do we even see whites, the students and other whites, engaging in sustained or assertive verbal dissent to the racist performances of friends, acquaintances, and relatives in the backstage settings. Just a few student journal accounts show one or more whites aggressively confronting other whites’ racist performances and interactions backstage. This lack of assertive confrontation was true for the journal writers themselves, even when they later said that they should have intervened. Many of our white college students commented later in their diaries that they recognized their friends and relatives were indeed doing racist stuff, but said they were still “nice people” to be with–that is, whites doing even extreme racist performances are given a “pass” and viewed at though they are doing something relatively harmless, like picking their nose.

Reviewing thousands of accounts that the college student writers provide, we estimate that no more than one percent indicate that at least one white person in a setting took some dissenting action, such as a strong verbal demurral or more active counter at the time of a racist incident. In the rare cases, white women were more likely than white men to try to hold other whites accountable for their actions.

Interestingly, in several of our relatively few accounts of active dissent, those whites who break with the traditional expectations and take some action to counter the racist performances of other whites act thus to protect intimate friends or relatives who are people of color. Apparently, very few whites take aggressive antiracist action solely because of a commitment to the egalitarian tradition of protest against racial inequality that erupts periodically in U.S. history–the antiracist protest that takes seriously the framing of society in terms of “liberty and justice for all.”