I, too, sing America.

I am the darker brother.
They send me to eat in the kitchen
When company comes,
But I laugh,
And eat well,
And grow strong.

Tomorrow,
I’ll be at the table
When company comes.
Nobody’ll dare
Say to me,
“Eat in the kitchen,”
Then.

Besides,
They’ll see how beautiful I am
And be ashamed–

I, too, am America.
–Langston Hughes

Like Jessie, I too have been overwhelmed by Obama’s victory.  I’ve been uplifted every day this week simply by thinking to myself, “We have a black president-elect” (image from here). 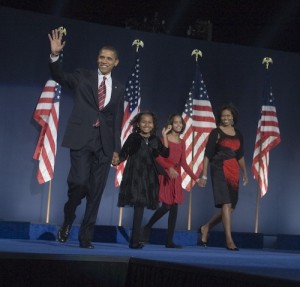 My background is very different from Jessie’s. I grew up in North Carolina in the 1980s, a beneficiary of the gains made during the Civil Rights movement. However, coming of age in the post-Civil Rights south was hardly idyllic. I never had to integrate any lunch counters, buses, or schools, but even without the structural machinations of legal segregation in place, racism was still manifest and evident. Whites still found a way to make it clear that while we could now use the same facilities and attend the same schools, in no way did they consider us equal. By the time I was eight I knew that the Klan still existed and was acutely aware of my (black) family’s relative vulnerability. Around age ten I remember noticing a pattern of whites getting better treatment than people of color in restaurants and stores. By thirteen, I had developed what C. Wright Mills would call a “sociological imagination” when it came to assessing issues of race and inequality. At fifteen, I discovered sociology and decided on the career path that would help me make sense of and name many of the things I’d seen growing up.

Being aware of these things so early on meant that by the time I reached adulthood, regular issues with racism and discrimination simply became par for the course. At age twenty four, when I went to view an apartment and the potential landlord visibly blanched when she saw me and grabbed her purse with one hand and her young daughter’s hand with the other, it didn’t faze me. I just decided not to bother calling her about an application. At twenty one , when my dad and I were driving through Virginia and he got pulled over for speeding, I didn’t stop to think about how sad it was that my immediate reaction was a paralyzing fear that the traffic stop could end with some cruel  humiliation or him being hurt. I just considered us both lucky that he was released with only a ticket.  When I was nineteen and my mom showed me the anonymous letter someone left in her mailbox that described the ways “people of color” (not the term they used) were all drug addicts and welfare mothers who were taking over a white country, I wasn’t surprised. I didn’t have much of a reaction.

My point here is that if you grow up in this country as a black American, too often these things become part of the fabric of everyday life. They become so commonplace and regular that it’s not hard to become desensitized to them, which in a way, is the worst part of racism. You think to yourself, well, today, I’ll get dressed and meet friends for lunch, but I’ll need to allow extra time for the subway since cabdrivers won’t stop for me, and I’ll have to make sure I tip the waitress well to do my part to offset the stereotype that black people won’t tip, and so on…just another day. To borrow a phrase from Thomas Shapiro, these are some of the other hidden costs of being African American.

This is the context in which I followed Obama’s path in the primary and the general election. Black people know well that in this country we are routinely devalued, marginalized, and subordinated in a myriad of different ways. There are the overt and horrific (think James Byrd, Jr. of Jasper, Texas) and the subtle and easily-overlooked (see the ABC Prime Time Live segment “True Colors”). But part of being black in America means confronting and coping with the consistent message that you still aren’t equal, don’t belong, and often can’t expect to be treated with basic human dignity. This is why none of the black people with whom I spoke were completely confident Obama would win, despite the poll numbers, inconsistent McCain campaign, and tanking economy. We know what it means when race pushes you to the margins of society. When black people of all ages say emphatically, “I never thought I would live to see this day,” to me, that speaks to the recognition we all have of how regular experiences with racism take a toll on us, shaping our expectations and our lives.

When I saw “Barack Obama Elected President” flash across the bottom of my TV screen, it brought up all the feelings and thoughts I’ve been describing here. It made me fully aware of how often being black means coping with daily onslaughts, being excluded from the political process, and being forced into “outsider within” status. It made me aware of these things by contrast, because—like Michelle Obama–for the first time in my life, I felt included. The glass ceiling had been broken. For the first time ever in this country, someone who looked like me, who could relate to my experiences, would be occupying the nation’s highest office. When I saw other black people on TV sobbing or even just tearing up, I knew what they felt because it was in me too. We experience so much negativity, pain, and oppression in this country that sometimes we don’t even notice it. In this context, Obama’s win meant so much to all of us because it was a welcome shift from the exclusion and hostility that characterize much of our basic experience as black people in America.

I do not want this to be misread as a statement that if only black people believed in ourselves, we could defeat racism and accomplish any goals. This is not what I’m saying, and such a statement is shortsighted and profoundly factually inaccurate.  All of the racial issues (prison industrial complex, health care inequities, educational disparities, economic and wealth inequality, and more) that we write about on this blog are still happening and won’t disappear just because we have a black president. But I predict that the success of President-elect Barack Obama will have a long-lasting and meaningful effect for many, but for Black Americans in particular. It provides a bright spot in an otherwise often bleak sea of inequity. On November 4, we too sang America.