A recent story on P 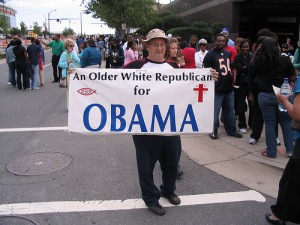 olitico.com finds that Barack Obama is “poised to win the largest share of white voters of any Democrat in more than three decades.” The article reports that 44% of whites are supporting Obama. This means that Obama is poised to get more white voters than Bill Clinton, Al Gore, John Kerry—every white Democratic candidate except for Jimmy Carter, who had support from 47% of whites (image from Mr. Jincks).

Of course, we still have a little over a week to go before the election, and things could still change. But many pollsters, oddsmakers, commentators, and analysts are calling this race for Obama. A recent New York Times story even argues that some within the McCain camp (speaking on the condition of anonymity, of course) expect Obama to win.  Politico’s report comes at a time when there are hopeful implications to be drawn from many otherwise negative stories. Racialized attacks on Obama seem to be falling flat with voters. A McCain volunteer’s fabricated story of being attacked by a large black man did not follow the same path as the Susan Smith story of 1994 or the Charles Stuart case of 1989  (Both Smith and Stuart falsely claimed they had been attacked by large black men. In both cases, police engaged in widespread racial profiling before it became clear that the “victims” were actually the perpetrators of the crimes.) Increasingly, it is looking more and more like Obama could get a broad coalition of support not just from voters of color, but from the white voters he will need in order to win the presidency.

When Obama won the nomination, I wrote on this post about how his election would potentially change the ways in which we think about and understand race in this country. If Obama generates the level of support Politico is predicting, it will be a major, transformative event in American history.  It will mean that not only will we have the first black president, but that a sizable number of whites supported his candidacy, even more than those who supported Bill Clinton, one of the most popular white Democratic candidates in recent history. Another thing to consider is that Obama would be taking office during an economic crisis of nearly unmatched proportions. So not only would Obama generate more white support than any of his white male Democratic predecessors, these type of numbers would suggest that a record-breaking number of white voters trust a Black man to provide better leadership, solutions, and guidance out of this financial meltdown than his white male counterpart. This is a phenomenal, unprecedented moment. As the political analysts are (somewhat repeatedly) fond of saying, it might just be a “game changer.”

But first, for what this doesn’t mean. An Obama win, even with more white support than any candidate preceding him since Jimmy Carter, doesn’t mean that racism is over. It doesn’t mean that some of the same whites who will vote for Obama see him in ways that challenge racial inequality. Specifically, some will continue to see him as different from “most” black people, who they view as lazy, unintelligent, and immoral. It doesn’t mean that institutional, systemic racism that results in neighborhood segregation, wealth disparities, educational inequities, and racialized processes in the criminal justice system no longer exists. It doesn’t mean that Black men will stop getting beaten and harassed by police, or that Black women will no longer be disproportionately represented in low-wage, low-prestige jobs. It doesn’t mean that white privilege has disappeared or that the nation has suddenly become colorblind.

What this does mean, though, is that we may just be entering a new stage in American society. Blogger Andrew Sullivan stated recently on “Real Time with Bill Maher” that Obama represents the future of this nation, and this election simply poses the question of whether we accept this future now or later. I think Sullivan is correct. Census data suggests that by the middle of this century, whites will no longer be a numerical majority in this country. We are clearly moving into a truly multiracial era in terms of the numbers alone. I think Obama’s presidency—if it comes with the type of white support Politico predicts—has the potential to be the beginning of social change in the direction of a multiracial nation in terms of political, social, and economic representation as well. This would take America closer to being the kind of nation that it could be—the one that really offers liberty and justice for all, and really provides everyone with equal opportunity.

It’s important to point out, though, that Obama’s presidency (again, attained under the conditions laid out by Politico) isn’t sufficient to get us there. One thing his candidacy has shown in stark and often hurtful detail are the manifestations of racism that are still present and widespread—monkey dolls brought to GOP campaign events, Obama hung in effigy at a college campus, suggestions on Republican and conservative websites and at rallies that he be killed/waterboarded/tortured. But widespread white support for Obama could signify the beginning of major steps towards finally achieving racial equality, if we as a nation don’t follow this up by getting lazy and complacent.

I am profoundly encouraged by the number of whites who have been able to move far enough past white racial framing that says that Blacks are lazy, inferior, unqualified, etc. to vote for a black candidate, and would be enormously pleased if these numbers reflect Politico’s expectations on Nov. 4. If we keep going and continue rejecting white racist framing and begin dismantling the institutionalized racism that perpetuates unequal opportunity, think of what kind of country we could have. Whether it will happen or not is still to be determined, and America has an unfortunate history of following progress with regression. But for the time being, I’m hopeful that broad white support for a black man might be the kind of change we can believe in.