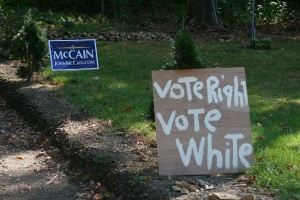 While the McCain/Palin campaign tries to run a “respectable” official campaign by apologizing, his supporters continue to display some pretty overt racism in a variety of ways.   For example, a white man attending a McCain/Palin rally over the weekend showed up with a “Curious George” doll with an Obama sticker on it (link opens a video).    Nice.

And, there’s this photo of a sign in Warren County, Pa., taken on Oct. 5 by Maryland resident Kurt Kolaja, who was attending a wedding in the area (and first published here).  Very nice, indeed.

So as the McCain/Palin campaign tries to officially distance itself from these overt expressions of racism, attributing this sort of thing to the actions of the “occasional nut.” While I was initially willing to cut McCain some slack when I heard him challenge some of his supporters this weekend, as time rolls on, his protestations seem half-hearted and disingenuous.   All of this raises the issue of whether or not the campaign should be held accountable for their supporters’ amped up the racist expressions that seem emboldened with a sense of entitlement and outrage.

Rep. John Lewis stepped into this controversy with the following statement:

“What I am seeing reminds me too much of another destructive period in American history. Sen. McCain and Gov. Palin are sowing the seeds of hatred and division, and there is no need for this hostility in our political discourse,” Lewis said in a statement.

“George Wallace never threw a bomb. He never fired a gun, but he created the climate and the conditions that encouraged vicious attacks against innocent Americans who were simply trying to exercise their constitutional rights.

I agree with Jill (at Jack & Jill Politics) that Lewis was right to draw this parallel.  What do you think?