The ABC News website has an interesting article, “Two Nations Under God: Segregated Churches the Norm,” by Imaeyen Ibanga. The article cites a new study by the Pew Center that shows the huge racial divide in churches in the United States. The journalist summarizes thus:

Every Sunday parishioners head to their respective churches, the vast majority of which are filled with worshippers predominately of one race. Only 7 percent of American churches are racially integrated, according to the Pew Center.

These data show just how racially segregated the United States is now well into the third millennium–and also accent how unusual it is to have an African American with a serious chance to become president right now. One white churchgoer is quoted as explaining the church segregation this way:

You go into a society that’s all white, you’re gonna typically have an all-white church, and vice-versa with other ethnicities as well.

One Ohio minister, Cliff Biggers, is trying to break down the racial segregation by (photo: Obama site) 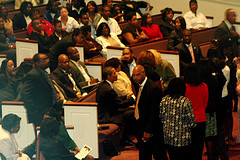 black congregation out of its comfort zone to a white church every fifth Sunday. Often times Biggers and his congregants are given a warm welcome, inviting visitors to meals and fellowship. But sometimes the response can be less than enthusiastic. “I think people are a little put back, sure. You have people walking in that, number one, you don’t know them; number two, they look different than you.”

A little put back, indeed. As I was reading this article, I have also been thinking about a revealing new book by social scientist Korie Edwards that I have started reading. Called The Elusive Dream, it examines the impact of institutional racism (and thus white racial framing) in churches that are consciously interracial. The book description puts her findings this way, starting with one interracial church service:

A black pastor and white head elder stand before the sanctuary as lay leaders pass out the host. An African-American woman sings a gospel song as a woman of Asian descent plays the piano. Then a black woman in the congregation throws her hands up and yells, over and over, “Thank you [Lord]!” A few other African-Americans in the pews say “Amen,” while white parishioners sit stone-faced…..Even in this proudly interracial church, America’s racial divide is a constant presence. . . . . [I]nterracial churches … help perpetuate the very racial inequality they aim to abolish. . . . [M]ixed-race churches adhere strongly to white norms. African Americans in multiracial settings adapt their behavior to make white congregants comfortable.

The black members are thus forced to conform to white norms and racial framing of the church situations. The very long history of white-imposed segregation and white norms and framing helps to explain these disturbing findings. The ABC news article notes the centuries-old historical reality in regard to racial segregation in religion for African Americans:

The first black churches were built by freed slaves and many of them where open to whites on principle, but Jim Crow laws brought fresh division and wounds. “They had to sit in that last pew and if a white would come and families would come, even though they were in that pew they had to get up and give them their pew,” said Sister Eva Regina Martin, mother superior at Holy Family Sisters in New Orleans. . . . “It’ll take many years but I think as the years go by people will allow people just to be…,” said Martin, who is the head of just one of three black orders of nuns.