According to the local website, The Grove Project, the city of Clarendon, Virginia has seen this letter circulating around — aimed at discouraging “guilty” whites from voting for Senator Obama, with cites to antiracist thinking and websites, which have denied any ties to this example of using guilt to get people not to vote for Obama. This is rather blatant racism in very odd clothing, indeed. What do you make of it? 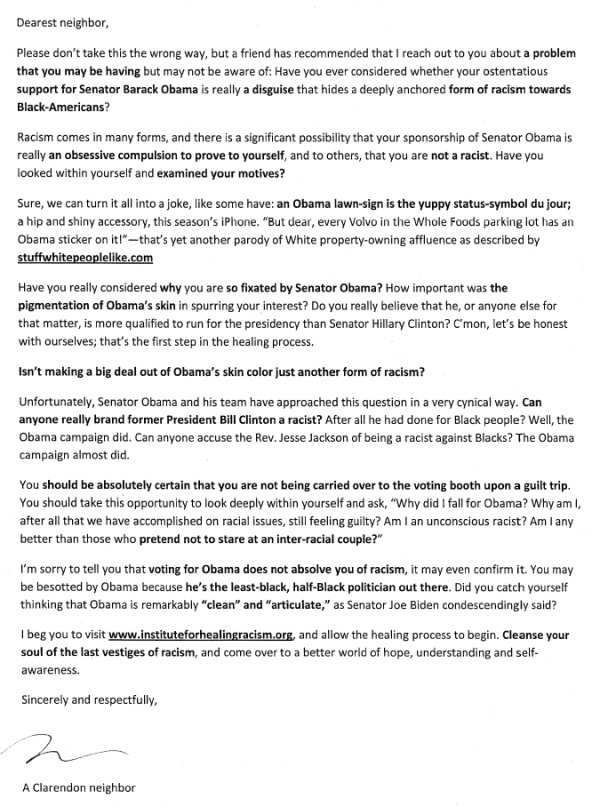 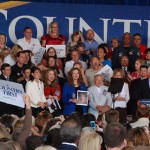 As the economic crisis worsens (and the forecasts look pretty gloomy), some people are speculating that undecided racists may no longer be able to afford the “luxury” of racism (image source).  Here’s a snippet from an email Ben Smith received at Politico.com:

“What’s crazy is this,” he writes. “I was blown away by the outright racism, but these folks are f***ing undecided. They would call him a n—-r and mention how they don’t know what to do because of the economy.”

And, the polls seem to indicate some support for this trend.  Among voters for whom “the economy” is their first priority, Obama leads by a wide margin.   This has given some writers cause for optimism, as Ta-Nehisi Coates writes (for The Atlantic):

“Call me crazy, or overly optimistic, but… [I think] … Racism is a luxury that, at this point, a lot of white voters can ill-afford. I think a crucial number of them know that.”

I wish I could share Coates’ (and others’) optimism.  However, there’s lots of evidence that the McCain/Palin campaign is pandering to the lowest (racist) common denominator in ways that are both overt and intentional, as well as in ways that are practically subconscious they’re so automatic.   For example, at last night’s presidential debate, John McCain referred to Barack Obama as “that one” and at the close of the debate refused to shake his hand (opens video link).  I doubt seriously that McCain or his handlers planned either of these. Rather, McCain’s rhetorical choices and his body language suggest a deep disgust for Obama.  This may be merely personal disdain and might have been directed at any political opponent of McCain’s, but one suspects that it reflects a deep well of racism (recall, McCain for years opposed the King holiday in Arizona and until very recently publicly used the term “gook” to refer to just about any one of Asian descent).

The verbal and non-verbal cues coming from McCain are easy-to-latch-on-to forms of symbolic racism for those inclined to interpret them in that way.  And, once again, it’s clear that the campaign’s strategy is to leave the more overt signaling of this racism to Palin.  For instance,  witness the kinds of vocal responses from crowds at a recent Palin rally when supporters shouted “terrorist” and “kill him” at the mention of Obama’s name.  This kind of irrationality is a powerful reminder that historically whites have voted (and acted) in ways that were not in their economic interest in order to maintain white privilege (and not only working-class whites).  Choosing a political leader (indeed, choosing a team) based on who is best equipped to deal with the economic disaster at hand makes logical, rational sense.  Unfortunately, for many whites, this may well be the last luxury they learn to do without.